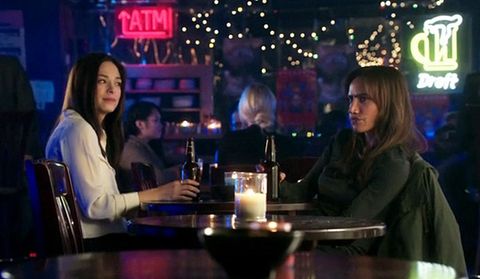 Beauty And The Beast 1.13 "Trust No One" TV REVIEW

THE ONE WHERE Muirfield is after Vincent, Alex proves she’s not good at going underground and Creepy ME Guy is getting more and more suspicious of girlfriend Clair. Also; love is in the air and Catherine’s partner is a grumpy pants.

VERDICT Well, here we go with another, “It’s almost a good episode of Beauty and the Beast but...” review. This show is so frustrating to watch, and to review. It’s like the makers have got their hands on the “big book of good TV writing” but they’re missing several pages. The show has moments of great TV story telling but then always manages to drop the ball in some way only seconds later.

We start this week with a kick-ass spy craft version of Catherine who we’ve never seen before. It’s all clipped sentences and brutal reality as she explains how things are to Alex. She’s great; where has she been all series? But later in the show all that good work unravels when Catherine runs a check on whether the now missing Alex’s credit cards have been used. The same credit cards kick-ass Catherine took off Alex in the opening scene.

And then there’s Vincent; after spending the last few episodes planning to run away with another woman (Alex) he’s now trying to shower Catherine with Valentine’s surprises, including an excruciating flash mob routine. He’s supposed to be in hiding; Muirfield is hot on his tail and he spent last week fighting bad guys in the woods. But here he’s spending his day sending lame Valentine’s gifts to Catherine, the girl who just last week asked him to back off (again).

Elsewhere Creepy ME Guy doesn’t trust his girlfriend and is testing her with questions about her business trip. When he challenges her Clair comes clean and in a bizarre twist Creepy ME Guy ends up joining the Muirfield conspiracy. It’s an interesting move. After only finding out about the conspiracy last week he’s joining it now? He’s been dogged in his investigation of the DNA altered creature but he never struck us as a bad guy – a creepy womanizing creep yes – but not a baddie. We don’t think he’ll fit with Muirfield. We think he knows that too, and we hope it’s some sort of ruse to get more information. We also wonder how this move will this affect his relationship with JT.

At the show’s close we get three quick scenes that promise to shake things up; Police Partner interrupts Catherine tampering with evidence and, with very little discussion, PP decides she wants a new partner. This is another left field move; we know PP isn’t exactly heavy on character but she did at least seem to be a loyal partner. Not so here. Mind you PP is particularly grumpy all through this week’s episode, so maybe she’ll be over it next week.

It seems Vincent’s not-taking-no-for-an-answer Valentine’s assault just might have worked. There’s hope for stalkers everywhere. With an end of show visit to Catherine’s apartment the two almost kiss, but are interrupted by Catherine’s sister. We swear the sister character only exists to walk in and interrupt Catherine when she’s’ being suspicious or hiding Vincent behind the door.

We also see Alex finally leaving town. Thanks to her association with Vincent, her life is a mess and she’s having to start over somewhere else, but with Muirfield knowing exactly where she is we reckon we’ll see her again.

Okay, this is a CW show, so you have to expect some slush, but sometimes the relationship angst stuff seems really pointless. The adulterous relationship between Police Partner and the police boss isn’t interesting because neither character has anything of note to them. Likewise Catherine’s sister flirting with Darius; it’s all just distracting us from the interesting parts of the show.

This recent run of episodes is the closest the show’s ever been to being decent, but it’s frustrating to watch this show teeter on the edge of being good or getting cancelled. At this point it really could go either way and we’d be happy with either. This week’s offering is a very uneven bag, as usual, but it does manage to cover quite a lot of ground and change a lot of the characters circumstances. In fact there’s probably more going on for the characters here than there has been for a while. From Creepy ME Guy joining Muirfield to Police Partner deciding she doesn’t want to work with Catherine anymore, Alex leaving but seemingly falling into Muirfield’s hands and even Catherine and Vincent almost kissing; there’s a lot happening.

STALKER BEHAVIOUR OF THE WEEK Vincent sends Catherine flowers then spies on her at her desk from a roof across the road.

’ALLO ’ALLO Alex drugs Vincent and Clair turns up in a beige trench-coat just like a proper Cold War spy. It was so stereotypical we half expected her to say, “Leesen very carefully, I shall say zeez only wanz.”

MURDER DEATH KILL After being told to stay off the grid Alex goes to a journalist friend and tells the guy everything she knows. Not the smartest of moves. And guess what the crime of the week is? Yup. The murder of that journalist... But after the initial crime scene investigation to show who it is, the police aspect of it pretty much dropped.

LAMEST EVIL ORGANISATION EVER Muirfield is still so inconsistent. This week Muirfield tells Clair to convince Alex that it wants to help Vincent get better. Alex agrees to drug Vincent so they can take him. And again Muirfield doesn’t send enough people to complete the plan to kidnap Vincent – just Clair – and, of course, she fails. Yet after failing to get Vincent again and again Muirfield can find the journalist and kill him. Clair seems to find the in-hiding Alex very easily. And they later track which bus Alex leaves town on with ease.

We understand that they can’t actually catch Vincent – that isn’t going to happen – but Muirfield could be made to look a little less slap-dash. All the attention on Alex and having Clair in place with Creepy ME Guy seems to make little sense. They know the connection Vincent has to Catherine. They kidnapped her back in episode four; why are they not focusing any attention on her anymore? She sees him every week.