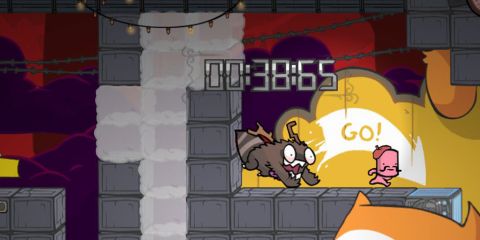 Co-op games are all about working together with your friends to clear a stage or beat up some baddies, but what happens if you have the option to backstab them too? The answer to that question lies coupled with a slew of hilarious scenarios in BattleBlock Theater, a quirky platformer involving deranged cats, frenemies, and betrayal featuring The Behemoth’s familiar brand of humor. So yes, BattleBlock Theater is utterly ridiculous, but also seriously fun.

Part Running Man, part satirical play, BattleBlock Theater tells the story of a crew of best friends who get shipwrecked on an island inhabited by weird cats and are forced to perform in deadly games for said cats' amusement. The little prisoner you control needs to survive the theater’s various deathtrap-ridden stages and collect gems to unlock more rooms, getting him closer to freedom and his friends. It’s essentially a tale of heroism narrated by a hysterical and cynical narrator that chimes in every so often. He’ll tell you how your hero and his friends ended up on this island, but he’ll also throw in some personal anecdotes that turn the game’s narrative into something of a stand-up comedy routine you can’t help but laugh at. And when he starts to comment on how many times you’re dying in the same exact spot, you’ll learn to laugh at yourself too.

The game is a platformer but also features plenty of subtle puzzles in the environment that require you to stop and think about your next move, especially when you’re figuring out how to get all the hidden gems and balls of yarn (more on that later) in each stage. It is also a brawler, and so you’ll sometimes need to fight off enemy cats that exist only to make your life miserable. As you progress through the game, stages introduce new obstacles, enemies, and time trial challenges that help keep the journey fresh and exciting. Even after spending a few hours and playing through dozens of levels, you’ll run into new situations that will put a smile on your face.

BattleBlock isn’t a hard game nor is it one that constantly punishes you for missing a jump. Instead, it rewards you for knowing how to use your surroundings (and your teammate) to your advantage. The game’s Story mode can be enjoyed solo, but get ready for a whole new experience if you play it locally or online with a buddy. The stages in co-op mode have been tailored for two players and require teamwork to complete. Throw your buddy onto a switch, help him climb up a ledge, or mercilessly throw him into some deadly water and jump on his flailing body to hop across. Just like the game’s solo stages, co-op levels get more challenging and creative as you progress. You’re both still working together to find every collectible and receive the best grade possible, but a little friendly fire adds to the fun and insanity of BattleBlock’s interpretation of teamwork.

Collecting stuff not only gets you an A+ on your report card, but it also lets you purchase items and extra characters to play as. Bribe the cat guards with all those balls of yarn you picked up and you can buy weapons like a vacuum, fireballs, or a suction cup gun, all of which make getting past certain areas a little easier. These items are especially useful when playing the game’s hardcore mode where one life is all you get to clear a stage. Gems, despite being tricky to get, only let you purchase new heads for your character, offering nothing more than a cosmetic upgrade to your hero’s expressionless face. You can also trade items and heads with others via Xbox Live, but this system, and items altogether, don’t add much to the game’s already rich package.

In addition to the co-op stages, BattleBlock Theater also features plenty of additional modes that give you a reason to actually bash your friend across the head into a wall of spikes. Your usual King of the Hill and deathmatch-style gametypes make the list, but there are also some more creative arena games that require you to kill your enemy and steal his soul or run around painting every block you touch your team’s color. These stages may lack the cleverly design seen in Story mode, but they do have the satisfying component of letting you play quick matches with friends in a free-for-all setting where anything goes. And if you’d rather get creative, the game offers an impressive level editor that lets you make your own evil stages and share them with others online. You can play with nearly every texture and object you see in the game, so your possibilities are wide open.

BattleBlock Theater is filled with absurdity, fart jokes, and curious characters that will easily suck you into a colorful world. Its stages are creative and get more complex as you get used to its mechanics and controls and offer enough challenge and funny dialogue to keep you amused. Play it alone and you’ll laugh; play it with a friend (and push him off a ledge) and you’ll laugh even more.