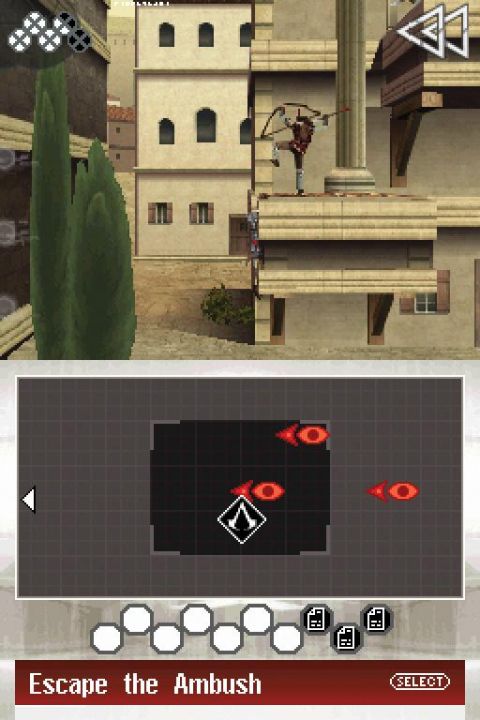 It’s Assassin’s Creed II – but on your DS! Except it isn’t at all, of course. It’s a 2D platformer with fluid controls and some satisfyingly gory death sequences, but like so many of its peers on DS, it attempts to ape its bigger brother version too faithfully, and it ends up looking more out of its depth than a snake in a high-fiving contest.

As ever, stealth is very much the name of the game. The execution of the executions is simple – tiptoe behind a guard by holding down L and cut them into San Marino-sized chunks by pressing X when in range. Alas, there’s only so many ways you can sneak up on someone when you exist in a two-dimensional plane (well, only one way, really), so in practice, you basically end up just walking up behind an endless succession of guards and knifing them in the back.

But there’s not much tension even in that, as the enemies are as dim as a movie theatre and will fail to spot you unless you’re looking right up their nostrils. The only real challenge, then, comes from the touchscreen radar, which is so vague that it might as well just permanently display a photo of Europe from space.

The shoehorned stealth elements mean that most levels are stop-start affairs that never quite manage to flow. You do get to run at full-pelt during escape missions – which are by far and away the best part of the game – but these are few and far between, and it’s never long before Assassin’s Creed: Discovery once again grinds to a standstill.