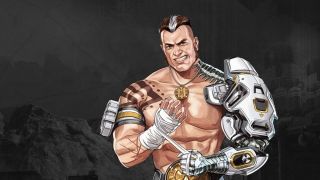 Apex Legends' 12th character has a six-pack. The new hero coming in Apex Legends season 4 on February 4 is named Forge, and he's a musclebound brawler who brings as much star power to the battlefield as he does firepower. While Respawn Entertainment is holding back our first look at how Forge will actually play, the developer dropped a brief outline of his approach to the Apex Games and overall backstory in a recent developer stream.

Though he's a newcomer to the sci-fi battle royale, Forge is a five-time Hyper Fighting Federation champion. That is 100% Space MMA, by the way. Forge has thoroughly established his dominance over the Space MMA world, and now he's coming to do the same for the Apex Games. His pre-existing celebrity status is reflected in the fact that he's the first corporate-sponsored Legend. His sponsors? Good old Hammond Robotics, the manufacturers of Titan mechs (remember, Apex shares its universe with Titanfall) as well as robots such as Pathfinder.

Granted, most of the MRVN units Hammond Robotics makes don't wake up self-aware in abandoned facilities with no idea who brought them to life or for what purpose. I'm already foreseeing some great lines as Pathfinder tries to extract info from Forge - "I don't know, robot dude, I just cash their checks and make sure their logos face the camera."

It looks like we'll have to a bit longer to find out how Forge plays. Until then, it seems safe to assume that he'll join the Absolute Units camp along with Caustic and Gibraltar, all of whom rock a Fortified buff damage reduction buff to make up for their ample hit boxes. Respawn also teased that he has a "mean left hook", so expect his melee attacks and executions to make good use of that hulking metal arm.

Check out the Apex Legends Grand Soiree Arcade event while you're waiting for the new season to begin.