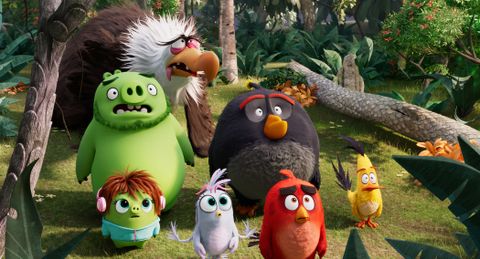 It might not up there with the Toy Story sequels, but this is still a colourful, creative, deliciously daft animation

The birds and the pigs are back for this pleasingly silly sequel to the 2016 movie inspired by Rovio’s bestselling video game. This time the theme is ‘frenemies’, as the rivals that spent their days firing potshots at each other to protect their respective islands must now forge an uneasy truce when a new enemy appears. Voiced by Leslie Jones, Zeta is a purple-feathered bird of prey from the chilly climes of Eagle Island. Fed up with the inclement weather, she has designs on turning both Pig Island and Bird Island into her own personal playground.

Led once again by the feathery Red (Jason Sudeikis) and green-skinned porker Leonard (Bill Hader), these sworn enemies team up to head to Eagle Island and disable Zeta’s super-weapon, which fires out giant balls of ice. Joining them are Red’s old chums Bomb (Danny McBride) and Chuck (Josh Gad), as well as the latter’s brainy sister Silver (Rachel Bloom) and Leonard’s assistant Courtney (Awkwafina). And what do they come up with? Disguising themselves in a lame bird costume, one of the film’s funnier ideas.

Directed by Thorup Van Orman, taking over from Clay Kaytis and Fergal Reilly, the animation is kept bright and breezy and the gags as plentiful as they are groan-worthy (one character reads ‘Crazy Rich Avians’, in one of the more amusing asides).

Admittedly, the relentless jukebox soundtrack – ‘Hello’, ‘Axel F’, ‘All By Myself’, ‘I’m Too Sexy’ and more – gets a bit tiresome. But with vocal additions including Nicki Minaj and Tiffany Haddish (plus Peter Dinklage reprising his role as the ‘Mighty’ Eagle) there are plenty of distractions in what is a fun-filled follow-up.

It might not up there with the Toy Story sequels, but this is still a colourful, creative, deliciously daft animation