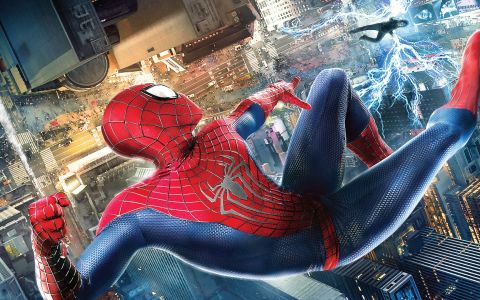 It should be exhilarating, swinging from skyscraper to skyscraper hundreds of feet above the streets of Manhattan at breakneck speed. Who hasn’t wanted to perch atop the Chrysler Building and peer down in awe at the sea of humanity below? For multiple console generations, we’ve been able to do just that as Spider-Man, battling arch enemies and saving New York City from ruin. Some of these experiences have been a blast; others, not so much. The first Spider-Man game of the next-gen era falls decidedly in the middle of that spectrum.

It's important, so let's just get it out of the way: While there is plenty to like about the next-gen version of The Amazing Spider-Man 2, it’s not even remotely a next-gen experience. And by that, I'm talking about everything from the visuals to the game mechanics to the enemy AI--none of it will have you thinking to yourself, "Oh hell yeah, PS4." Even though parts of the game are undeniably fun, when juxtaposed with existing (and equally-priced) next-gen fare, it’s tough to hand out high marks.

But let’s back up for a second. The Amazing Spider-Man 2 ties in to the just-released film and puts you, naturally, in Peter Parker’s shoes as he tracks down multiple killers that are terrorizing the streets of Manhattan. A steady parade of characters enters and exits Peter’s life along the way, and the overall tone of the plotline becomes more sinister as it unfolds. Murder, gang wars, and martial law rule the day in this New York City, and Parker is determined to restore order to the town. It’s a big challenge, and--surprisingly--its events are entertaining, keeping you eager to find out what happens next. The campy twists and turns of Peter’s investigation and relationships with friends and villains alike are solid comic book fare.

There is a lot to do in Spider-Man’s Manhattan, but once you veer off the main storyline, you'll quickly grow tired of the lack of variety in the side missions. The problem centers around the fact that Spider-Man needs to maintain a Heroic status to avoid constant harassment by police and special forces, and the way to do that is to constantly save people or break up fights or save carjacking hostages or...well, you get the point. By the third time I beat up 12 dudes holding the cops at bay simply so I could get through the city without being attacked, I was pretty much over it.

Speaking of beating up dudes, that happens. A lot. Pretty much every mission, in fact. Some require stealth, others simply suggest it, but most let Spidey just jump in and kick major ass. He mixes it up with all sorts of enemies, from dumb-as-a-doornail henchmen to heavies and speedy specialists that require more thoughtful tactics. For all but the numerous boss battles, you'll reach a successful conclusion more often than not by mashing the square button and dodging at the right moment to pull off a parry (indicated very handily by the enemy flashing red). However, there are a decent amount of combos and signature moves that add some variety to battle. It's far more rewarding to web-toss a gun out of an enemy’s hands before kicking his teeth in, even if it isn't necessary. That said, no one will ever mistake The Amazing Spider-Man 2 for a technically deep combat experience.

The Amazing Spider-Man 2 also falls down when it comes to the one thing you want from a Spider-Man game: mobility. Getting around town is the wrong kind of adventure, thanks to a fairly clunky version of Spider-Man’s signature web-slinging and building-crawling techniques. You'll constantly smash into the sides of buildings and get your directions mixed up as the camera struggles to orient Spidey properly. While these problems never really prevent you from getting where you need to go, for crying out loud Spider-Man is a superhero! He should be able to venture through the city with elegance and style. Even as you max out Spider-Man’s skills via the simplistic upgrade paths, your swinging experience doesn't materially improve.

As you swing around, you'll invariably notice the wealth of collectibles strewn about the game--these are pretty good fan service. And they're more than just items for your trophy case; collect enough pages and a full comic book is unlocked in a store manned by none other than Stan Lee, while each suit you acquire has specific strengths that you upgrade as you gain XP while wearing them. The collectibles are by no means a game-changer, but their inclusion will certainly be appreciated by Spidey buffs.

There was no great expectation that The Amazing Spider-Man 2 would be a watershed moment for comic book-inspired video games. It isn't, and that's fine. In fact, the game’s quite enjoyable, at least in much the same way that any blockbuster summer explosion movie is. But have no doubt: While it is technically a game for the next-gen, it’s a familiar experience that doesn’t innovate in any way and feels like an early previous-gen title at best.