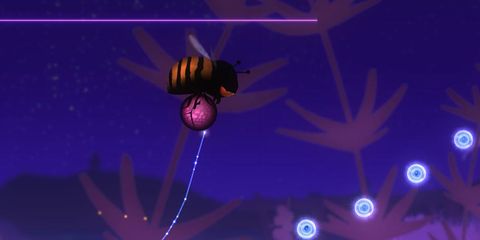 After Spidy's lady friend crash lands on an alien planet (which just so happens to be Earth), the faithful spider follows... only to crash as well. As is expected of a platformer, the story doesn't go too deep. He'll have to traverse predator filled forests, treacherous ponds, and caves to repair his ship and save the damsel in distress before escaping the planet. Adorable characters, beautiful visuals, and upbeat music stand out as the high points of Alien Spidy, but unfortunately, the gameplay doesn't manage to find as much success as the presentation.

A path of blue, green, and purple orbs (each representing specific score values) guide the hero through the stages. The more orbs you collect, the fewer retries you use, and the faster you reach the end, the higher your score. For the most part, following the complicated orb paths is a blast. You'll have to carefully time your jumps, swings, and item snatching while avoiding an engaging mix of dangers, including water spitting fish, hungry bats, and other environmental hazards. Developing a rhythm and successfully navigating the course to the next checkpoint can be incredibly thrilling. The underwater segments are particularly enjoyable, and special power-ups do well to mix up the gameplay, but the web swinging (which is a significant part of the game) is problematic and frustrating. Even if you manage to pull off a decent run, it feels more like luck than skill--a bad sign in this sort of game.

To swing on your web, you must press the right analog stick in the direction you want to shoot the line. It often requires pinpoint accuracy, and it's far too easy to miss your target. It becomes incredibly irritating when you fail to connect, especially when you repeat the action over and over again. On top of that, the momentum you build up from swinging will launch you off your webline with unexpected force... or not, meaning it's hard to predict how the touchy physics will behave. Considering how fast and accurate you must be to complete levels with a decent score, the web shooting controls make some stages incredibly tough to complete, let alone earn a five-star score ranking in.

Also, despite the environment's dark-but-beautiful aesthetic, a considerable amount of the trial and error is required to complete the otherwise straightforward levels. This mostly stems from the lack of visual cues with interactive objects in the stage. Spidy can latch on to any black object in the world, including rocks, branches, and flowers, but the problem is that the black objects often blend in with the barely lit backgrounds. It's easy to miss critical anchor points and small platforms as you speed along the course--resulting in multiple retries.

The challenge of earning even just a respectable two or three stars in each level becomes an issue as you try to progress through the game. Each area requires you earn a large number of stars to move on to the next zone--but since it's so difficult to meet the outrageous score requirements, you'll find yourself stuck repeating the same frustratingly difficult stages.

Alien Spidy's environmental aesthetic, cute characters, and charming music are alluring, but beneath those features is an unbalanced platforming adventure that can drive you mad. The controls are unreliable, and the difficulty spikes are incredibly harsh--especially when mixed the the game's environments, which can often become muddled as you try to discern interactive object with pretty set piece. Alien Spidy may scratch the platforming itch for some challenge seekers, but if you're looking for a game that can do tight platforming and precision, that's something a Spidy can't.

Alien Spidy was reviewed on Xbox 360.