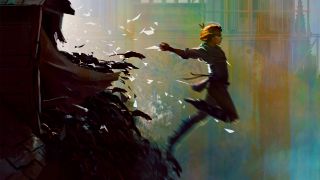 Anyone who has younger siblings - or is one themselves - knows that they’re a lot of responsibility. Either you’re the baby of the family and you can get away with murder, or your parents task you with keeping your younger brother/sister out of trouble on pain of death (speaking from personal experience here). In the linear, single player RPG A Plague Tale: Innocence, the latter is the case. You play Amicia, a girl who has to get her five year-old brother Hugo to safety… in medieval France. While being hunted by the Inquisition. During a man-eating rat plague. Shudder. Using light to scare off the swarms of bloodthirsty rodents, you’ll have to solve puzzles to make it through the apocalyptic landscape - but what you do to survive won’t go unnoticed. Hugo is watching. Learning. And you won’t like the results. I spoke to Lead Game Designer Kevin Choteau about what exactly is in store.

Survival of the cruelest

Although the relationship between the two siblings is at the centre of the story, Hugo isn’t the easiest person to travel around a ravaged medieval France with. He’s five years old and has led an incredibly sheltered life in a separate wing of the castle, being cared for 24/7 by his mother. “Amicia doesn’t know Hugo… [she] hasn’t seen her brother or her mother since his birth. She’s a bit upset about that,” says Choteau. Which is somewhat understandable. After their father is slaughtered by the Inquisition thanks to their mother’s… experiments (doesn’t sound ominous at all, does it?), Amicia has to take care of Hugo by herself as they flee the home they shared, yet lived entirely separate lives in.

Death is a concept even grown adults have trouble fully comprehending, so it’s no surprise that Hugo doesn’t fully realise just how serious things are. Innocently jumping with frogs by a riverbank when there’s a battlefield full of the stench of death just around the corner, he’s no Ellie from The Last of Us. Stoically remaining tough when things get difficult isn’t an option. Cross a field full of dead bodies and you’ll find Hugo unable to move unless you hold his hand, pulling him close and sheltering him from the horrific view. He’s only a child, after all. So Amicia has to make decisions for the both of them that he won’t understand. Like sacrificing a stranger to get through a corridor filled with swarming rats. Or using soldiers as bait for the rats that are about to find them. “He’s naive, discovering the world,” Choteau tells me. “You’ll learn to care about your own brother… he can miss you if you disappear”. I got to see this in action: when Amicia leaves Hugo hiding so she can sneak closer to a guard, staying away for too long will make him audibly whimper with fear and call out for you. However cumbersome this might seem, leaving Hugo behind isn’t an option.

“Everyone is doing what they can to survive” in this world, according to Choteau. Including Amicia. She has to make difficult choices to ensure Hugo’s survival, but Choteau says that all these decisions “help to damage this relationship between Amicia and Hugo, because they won’t agree all the time about those things”. Memorably, in the demo I saw the pair enter a fallen siege tower. Closest to them is a swarm of rats, kept at bay only by the lantern in Amicia’s hand. On the other end is a man, stuck in the ruined wooden wall. Beside him is the door - which the siblings needs to get through. Pushing onwards with her lantern, the rats flee away from the light and get closer to the man, eventually devouring him… along with his screamed pleas for help. Hugo tries to get Amicia to save him, but she knows that this is the only way to get to safety. By the sounds of it, this is just the beginning of Amicia’s ruthlessness. “Maybe she’ll go too far sometimes”, Choteau says enigmatically.

Keeping Hugo safe isn’t meant to be easy. Choteau tells me that he “can be perceived as a constraint for the player, and can be in certain situations… but he will evolve. Then maybe you will miss this part where you were his big sister”. Every single time you kill someone in your way, every time you sacrifice someone to save your own skin, Hugo will remember what you did. And slowly, this little five year-old will start to think that treating humans cruelly - even if it’s the only way you can make it through alive - is normal.

The 30 best video game stories ever

As the story develops, your younger brother starts to change before your eyes. “Seeing your big sister kill soldiers, or others trying to kill you at other times, it’ll have an impact” Choteau says, “when you face the cruelty and brutality and you’re five, I don’t think you’ll evolve in a good way. Or at least you become too mature for your age”. Transitioning from naive to ruthless, the person Hugo ends up becoming won’t be because of the man-eating rats destroying France. It’ll be your own fault. What’s clear is that A Plague Tale: Innocence is going to be a “super narrative experience”, according to Choteau. “It’s a case of the perfect timing,” he says when I ask him about the game’s pacing. “It’s really details that matter and we’re learning that the hard way”.

Seeing as A Plague Tale: Innocence is linear, expect it to take about 10-12 hours to play through the entire thing - and prepare yourself for some unexpected twists. Although its release date hasn’t been announced yet, as well as being released on Xbox, PS4, and PC, there are already plans for it coming to Xbox One X and PS4 Pro… along with the 5,000 rats that’ll be appearing on the screen thanks to these super-powered consoles. But however scary the rodents might be, just remember that it’s not just them you need to be wary of - eventually the same will go for Hugo too.

If you want to get excited about some other upcoming titles, check out our list of all the new games 2018 holds