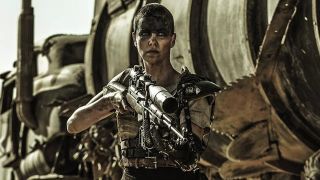 If we were talking about games, the idea of an overly linear storyline would put you right off, but when it comes to road movies that’s entirely the point. Road movies, as the name suggests, involve getting from point A to B, but turns what could be something incredibly dull into an art form. As you’ll see from our pick of the 25 best road movies* of all time, the genre manages to be incredibly diverse, especially considering they all have the same basic template.

The Movie: Half of the comedians in Hollywood race to find buried loot in Stanley Kramer's epic chase comedy.

How To Recreate It: Tweet that you've left a million dollars somewhere in the Mojave desert. Hashtags will do the rest.

How To Recreate It: Bunk off from community service, and take a stroll around the countryside.

The Movie: John Ford tackles John Steinbeck's Great Depression classic, as Henry Fonda and family up sticks and head West in search of a better life.

How To Recreate It: Let's hope you never have to.

How To Recreate It: Fill the car boot with wine (no Merlot!) and drive towards the nearest hills.

How To Recreate It: Attempt to travel anywhere during the Christmas break.

The Movie: Jake and Elwood are on a mission from God to reform the band and save an orphanage. Trouble is, the long road ahead is teeming with police, C&W bands, and Illinois Nazis.

How To Recreate It: Form a band and go on tour. If anything, the Blues Bros. experience will look tame.

The Movie: Sam Peckinpah's surreal odyssey about a drifter (Warren Oates) forced to cross the Tex-Mex border with a decapitated head for company is the savage extreme of the road movie.

How To Recreate It: Spend the summer driving around some rotting meat for that authentically rancid, fly-blasted Peckinpah look.

The Movie: Elderly Richard Farnsworth sets off to visit his estranged brother on a ride-on John Deere lawnmower. A typically weird David Lynch film, but this time it's 'nice weird'.

How To Recreate It: Buy a mower, visit your folks. Sign up to Just Giving and you could do it for charity.

The Movie: Gael Garca Bernal plays the young Che Guevara, whose eyes are opened to the injustice of the world while travelling across South America on a knackered bike known, ironically, as The Mighty One.

How To Recreate It: Hop aboard a moped for a tour of charities and community projects. Blog about to raise awareness and funds.

The Movie: Tom Cruise kidnaps autistic brother Dustin Hoffman in the hope of securing an inheritance. But unless they're willing to fly Qantas, it looks like they're going to have to drive.

How To Recreate It: The specifics of this one are a bit niche, but most people have relatives who don't get out much, so why not take your Gran out for a drive? Just don't let her gamble away her pension.