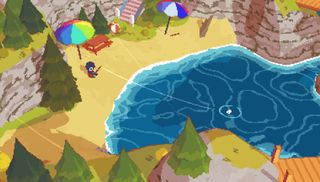 With so much of the industry's attention turning towards the impending arrival of the next generation, it can be all too easy to miss some of the absolutely wonderful indie games released throughout the year. That's why GamesRadar has turned to Jen Simpkins, Deputy Editor of Edge Magazine, to run us through the 20 must-play indie games that released in 2019.

It has been one hell of a year for independent developers and this list represents some of the most exciting, innovative, kind, and ambitious games released in 2019. What we're trying to say is that if any of these games went under your radar, you should do yourself a favour and give them a try. We promise you won't regret it.

Take Zelda: Breath Of The Wild's climbing and gliding, Animal Crossing's charming cast of animal characters, and Celeste's heartfelt narrative focus; squeeze it all into a couple of golden afternoon hours, and you've got A Short Hike. As bird-girl Claire, you set out on a mountain ascent to find mobile phone reception for an important call – along the way, you get caught up in witty sidequests and surprising character arcs, or distracted by fishing mini-games and parkour races. And that's kind of the point: this is an adventure about the medicinal qualities of the diversion, whether you find it in your surroundings, your hobbies, or your friends.

The joy of puzzle games is in those fleeting, perfect instances where you feel like a genius. There are plenty of times where this Sokoban homage makes us feel unutterably dumb – but the eurekas are so transcendent that our ego can forgive it. Like many other games, in Baba Is You, rocks can be pushed, and keys will unlock doors. But these usually immutable rules, written on blocks around the levels, can be changed: by rearranging sentences, we can turn the rock into a key, or, when faced with a wall around the goal flag, become the wall and simply shuffle on over to victory. And it only gets wilder from there. Inarguably one of the all-time great puzzle games.

Exquisitely bizarre and intricate, Disco Elysium takes the "roleplaying" part of "RPG" very seriously – and also with a generous pinch of salt. You're tasked with unpicking a strange and vicious murder, but at no point do you have to play along with what's expected of you, if you don't want to. Instead, by failing or passing skill checks, you can antagonise witnesses, have a few heartbreakingly-written existential crises, entertain dangerous notions in your Thought Cabinet (read: character development vehicle-slash-perk tree), and have long discussions with a mailbox. All of these things will shape your in-game brain in significant ways – and such deconstructionist mechanics might just force your actual noggin to start examining itself, too.

In an unexpected turn of events, puzzle-game maker Zachtronics branched out into visual novels this year. The result was one of the best-written games we've ever played. Matthew Seiji-Burns' story revolves around an AI-powered counselling service called Eliza; you, as Evelyn, play as the human proxy reading off its answers to patients in an effort to make the whole thing a bit friendlier. But Eliza isn't a story about the robots coming for our jobs; it's about humans, a disarmingly authentic exploration of the individual cost of technological progress. It doesn't pretend to offer answers – if it could, we sense Seiji-Burns wouldn't be working in video games – but asks all the right questions.

Grindstone is all bright colours, killer combos and nail-biting decisions: in compact dungeons, you line up enemies of the same hue to have beardy barbarian Jorj slice through them with increasing savagery. Get ten in a row, and you'll create a Grindstone, a rainbow gem that lands randomly on the board and allows you to switch between enemy colours when you pass through it. Bigger combos means better prizes, with which you can perfect your loadout to help you take on tougher obstacles and some delightfully designed foes. But enemies get more dangerous the longer you stay in levels, meaning there's delicious tension in choosing when to stick and when to quit.

If you liked Undertale, then firstly, congrats on your excellent taste – but secondly, you should check out Guildlings. It's an RPG stuffed with zippy writing and laugh-out-loud jokes: as Coda, you use your enchanted smartphone to help your friends save the world. Your friends are your party members, whose magical powers include charging their phones and being sarcastic. Often, you'll want to strategise effectively so that particular characters end fights in a certain emotional state; moody Syb needs to be calm to chat to some sassy goblins, and awkward Chazazz bouncy enough to run up a wall and knock a ladder down for you to progress. Sometimes, this means purposefully manipulating your mates – sometimes, brilliantly, they will call you out on it.