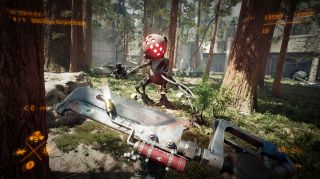 Peeking from between wrecked cars and overgrown fronds, we measure up whether the target’s worth the bullets. We’re a special agent known only as P-3, working for the KGB in a parallel universe in which the Soviet Union never broke apart. It’s a world in which the technical revolution marched on, knee-deep in communism and a paranoid imperialism fearful of Western powers… and one that entertains P-3’s taste for personalised, stylish gloves, apparently. Action RPG Atomic Heart made its debut in May 2018, billed by entertainment site IGN as 'the coolest trailer of the year'. One year later, amid rumours of a troubled development - and suggestions the open-world element might be reworked in favour of an episodic delivery format - this action RPG is set for a Q4 2019 release. Developer Mundfish recently released a full 10-minute gameplay demo… which confirms Atomic Heart as one of the most intriguing first-person adventure games of this generation.

This preview first appeared in Official PlayStation Magazine. Get the latest PlayStation news on your doorstep early and for a great price! Subscribe to OPM here.

A uniform line of bipedal machines, each one sporting a circular-saw crest protruding between their eyes, waddle beside the field agent. We see them but, thankfully, they don’t seem to notice us. They’d be almost cute if we didn’t know how murderous they were. As they pass, disappearing between suspended billows of liquid and goodness knows what else, we keep our head down and dart out of cover.

Popping shots off at whatever rustles the underbrush, and eventually taking out a supply drone, we swipe some dropped cigarettes. There’s a zipwire nearby but we’re going to have to find a carabiner to use it. A quick scout of the area, guided by the nose of our gun, suggests the coast is as clear as it’s going to get. We eventually find our carabiner, though we do have to walk over a corpse and a ruddy great big hole in the ground to get it. We try not to think too much about that at the time. But perhaps we should have, for as we’re raiding a nearby shack an irate crash dummy silently sneaks up and accosts us. Out of bullets (thanks a bunch, drone), there’s nowt for it but to pistol-whip the blighter. He takes exception to that and sends us tumbling down the hole.

When we wake up, we’re deep in the belly of Facility 3826. We light that cigarette.

This is what P-3 was specifically sent to investigate: an underground science facility filled with faulty machinery and killer robots. As you might guess, today isn’t a good day at the site, and it’s up to P-3 to figure out what went wrong. There were murmurs about a doomed romance between two employees, and rumours of strange experiments that raised the dead, though how all this ties into 3826’s downfall remains to be seen. We aren’t climbing back up that hole. There’s nothing for it; we head deeper into the belly of the beast.

We don’t exactly receive a warm welcome. A warped, patriotic jingle whirs out of sync somewhere, still-twitching corpses are strewn among torn propaganda posters, and one of those fighty crash dummies decides to give us the grand tour by punting us through the facility. We’re still out of bullets but luckily for us we’d just picked up something vaguely resembling a makeshift mace before it found us. It takes a fair few hits (and a sizable chunk of our health) but we manage to take the robot out in a spray of white sparks.

Although Atomic Heart is focused on melee combat, shortly after battering a bounty of bots we do manage to acquire a shotgun. With enemies hitting hard and ammunition scarce, it’s in your interest to avoid confrontation wherever possible. As we make our way through greenhouses and futuristic stables, we notice a mechanical foe still caring tenderly for a group of chickens. So they’re not hostile to all organics… interesting. Maybe it’s just humans they hate. We’ve no time to contemplate this further, as seemingly from nowhere a mech rolls onto the scene. It meets our shotgun blasts with indifference before launching itself at us… and that’s where our direct feed cuts out.

Developer Mundfish has been working on the game for more than a year - with recent rumours of development strife - but is keeping much of its work under its hat. We’re looking forward to unravelling the mystery of Facility 3826, and finding the truth behind the hearsay for ourselves when the game debuts in late 2019.