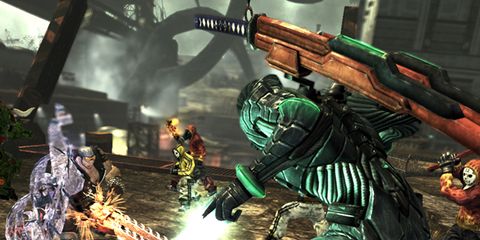 Can you catch a missile and throw it back at the jet that fired it at you? No, probably not. It’s also unlikely that you’d be able to sprint up a collapsed building in high heels, or punch a car with your bare hands so many times that it explodes. But Anarchy Reigns, Platinum Games’ frenetic third-person beat-'em-up, makes these godlike feats seem commonplace. It's that devotion to stylish excess that makes the game's action so appealing, where the battles are so absurd and nonsensical that you can't help but be charmed. It’s just a shame that the multiplayer is more frustrating than it is fun--especially given the fact that it feels like the core foundation for the otherwise short game.

You can think of Anarchy Reigns as a pseudo-sequel to 2009's MadWorld, as it brings many of the Wii game’s black-and-white characters into living color. Jack Cayman, the grizzled ex-Marine brute with a hand-mounted chainsaw, is back. This time around, he’s sharing the single-player spotlight with nimble pretty boy Leo Victorion, as they chase after a fugitive in a super-suit. Over the brief four-to-five-hour campaign, you’ll encounter dozens of skilled rivals, hulking mutants, deranged street thugs, and military drones. And you’ll punch them. You’ll punch them all, in the face, again and again and again.

You'll experience oscillating levels of enjoyment throughout the story mode, as scattered missions take you on a full tour of the gigantic levels, with the occasional flashy cutscene mixed in. Said missions range from exhilarating (riding a berserk mutant or gunning down waves of robots) to boring (escorts and fetch quests), with a fairly consistent variety--but they're made far more exciting by an increasingly nutty suite of environmental threats that break up the pace and keep you engaged. For instance, a fist-fight with a reptilian-skinned beast might be rudely interrupted by a crash-landing cargo jet.

Anarchy Reigns keeps things nice and simple when it comes to combat, using a rock-paper-scissors balance between your repertoire of quick jabs, powerful lunges, and hard-hitting grapples. Blocking and dodging are key to nabbing a high score, but there aren’t any extensive combo strings to remember or upgradable abilities to train up; even if you’re mashing buttons willy-nilly, you’re likely to get far. Call it dumbed down if you must, but it’s hard to deny the satisfying simplicity of pounding away at a single button to take down mobs of enemies.

Yeah, it’s short, predictable, and pretty darn easy to beat--but the single-player campaign is exceptionally entertaining while it lasts. Diehard fans of Platinum Games can look past the brevity of the single-player, and will relish the more intense encounters with powerful enemies. If, however, you’re not fond of gruff one-liners, sappy dialogue, anime-style duels, and hilariously over-the-top caricatures, all of the game’s ludicrous style may fall flat for you.

Unfortunately, the multiplayer side of things doesn’t quite hit its mark. Here you can play as a multitude of colorful fighters besides Jack and Leo, battling in a variety of team deathmatch, 16-player free-for-all, and one-on-one modes. And while you may think you’re hot stuff after plowing through the solo campaign, you'll be singing a different, frustrated tune when you get ganged up on and beaten to a pulp within seconds. The problem with the multiplayer is that it reduces the combat to an unintelligible mosh pit of violent chaos. With or without teams, players tend to congregate in one area of the huge map, where things devolve into a move-spamming, kill-stealing mess.

Shaky latency doesn’t help matters; at times, lag can cause your opponents to flicker around you, or make you exit a grapple animation momentarily frozen in place. Also, the frequency of grab moves and stuns means that you’re constantly having control of your character taken away from you--something that’s never enjoyable in a multiplayer experience. One-on-one encounters offer a better test of your chin-socking prowess, but the trade-off is the removal of all the riotous excitement of being the one scoring all the kill(steal)s in bigger matches.

Anarchy Reigns may be a case of style over substance, but if quick-and-dirty brawling is what you’re in the mood for, it’s guaranteed to scratch your savage itch. It’s a shame that the multiplayer, which could’ve prolonged the game’s frenetic fun, will serve as an amusing distraction. But when you just want to turn your brain off and pummel waves of baddies, it doesn’t get much more gratifying or outrageously stylish than this.