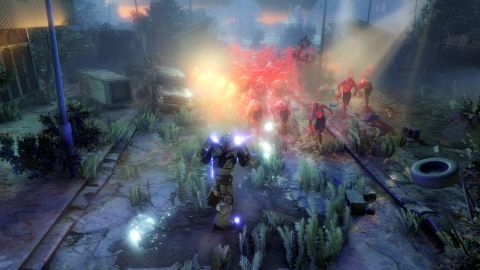 The world won’t stick with you, but beautiful visuals and excellent twin-stick looting make this a co-op blast…once you figure out what you’re doing. You could get lost for weeks in its end-game content, but only the most obsessive will care about climbing Alienation’s leaderboards.

Housemarque’s efforts to keep the twin-stick shooter alive and spin-firing in the 21st century provide some of the best arcade thrills on PSN. Super Stardust HD chews up time like a starving rottweiler and Dead Nation makes slaughtering zombies feel fresh (well, fresher than the corpses you’re retiring, at least). Alienation may share similarities with previous games, but their latest offering channels XCOM and Destiny, adding levelling and looting with mostly positive results.

It takes place on an Earth colonized by Roswell’s most infamous inhabitants, placing you in the metallic boots of one of three super soldiers ready to rid the world of Xeno scoundrels. There’s the medic-in-all-but-name Bio-Specialist, the semi-stealthy Saboteur and the pie-and-mash Tank, who, as the name implies, is the slow but solid class. They’re diverse enough to really pick a favourite and stick with them - for me, you can’t beat the Saboteur’s combo of temporary invisibility and laser guided missle strikes.

You’ll want to get them onto the killing fields as soon as possible to see how tangible the world is. It looks stunning for a top-down shooter. In Alaska, snow flakes constantly drift across the screen and your tiny hero leaves footprints where he runs. These engrossing details are expertly combined with great particle effects - explosions that spread across the screen, and sparks which dance away from bullet impacts. The level of graphical fidelity makes up for the uninspiring art style. It’s a standard hodge-podge of XCOM extraterrestrial types (oh look, scuttling bug creatures!) and apocalypse tropes. You’ll still coo when you watch an alien bodies flying towards the screen, though.

Before each mission, the game dispenses some painfully corny exposition and dialogue (hats off to voice actor who managed to squeak out the Ed Wood-esque clanger “If you want to save your chromosomes, I suggest you get out of there”) before dropping you into a massive map. The simple quests are an excuse to start hurling aliens at you. It’s similar to spiritual predecessor Dead Nation, but much faster. Aiming is a breeze thanks to a blue laser which constantly shows which direction you’ll fire, and there’s a nice snap to pulling the trigger and watching E.T.’s angry cousins fall at your feet.

There’s an intriguing PvP mode called Invasion, where you can jump into the game with random players and rain misery on their alien-thwarting attempts by blasting them to plasma pieces. There’s a reason I call it intriguing though - it’s another victim of the game not explaining its concepts well, as it’s unclear exactly how to invade other games. My team did get invaded once throughout our playthrough - we gave them a close encounter of the dead kind, but it was hardly memorable. If the PvP malarky isn’t for you, you can always disable it in the start menu.

Not that you’ll just be worrying about a couple of aliens, mind. The screen is usually teeming with hundreds of the blighters. Thankfully, the dash and melee combo reliably buys you valuable space, as well as adding a strategic edge to combat. You can dash into groups to knock them down, then mop them up or zing away from them, giving you enough room to keep the bullets flying. The speed and ferocity of how you deal with the otherwordly onslaught is typical of Housemarque. They completely nail the power balance - you’re into a killing machine one moment and alien scraps the next.

Add a few mates and the action becomes wonderfully chaotic - the screen resembles a Jackson Pollock original when your squad are bulldozing through alien hordes. Setting up games is tremendously easy, and online players can randomly drop into your games. On one occasion, I was one alien claw away from death, only to have a stranger join and scythe his way through the monsters attacking me. It’s a head-scratching decision why this is online-only, however, as it would be tense, pad-crushing, couch co-op gold.

What really keeps you barrelling through the missions is the promise of better weaponry. The grind for XP allows you to upgrade your active and passive abilities, as well as being the game’s main source of bragging rights at the end of a level. Looting is a huge addition, with various guns and grenades split across five categories, ranging from stock shooters to legendary weapons that can only be recovered from the battleground. The fun doesn’t stop there, though. Upgradable cores add extra damage or improved fire rates, with a spreadsheet’s worth of numbers explaining how efficient your new toy is. Chopping, changing and testing weapons is just as exciting as the initial buzz of finding them.

The problem is that the game never satisfyingly explains these systems. The first few hours involve tentatively fiddling in weapon menus, probing away to see how it all works. There are tips you can cycle through on the loading screen, but it’s not enough to explain the concept of your special attacks, let alone the concept of rerolling - the weapon stat system that involves you collecting and salvaging resources to randomly add effects to your gun. I was halfway through the story before I discovered on a loading screen that blowing up respawn beacons improves the loot you get at the end of missions - not great for a game that revolves around finding the best weapons possible.

That’s assuming you manage to drag yourself to the end of missions. Alienation is clearly designed to be enjoyed with online company, so gunning solo often results in death. The revive function is a multiplayer-only feature, and the level of experimentation that comes with combining different class abilities is the primary pleasure of the game. Housemarque is clearly steering players towards multiplayer - it’s just a shame that single players pay for that with an experience that feels less balanced.

Reaching the end is merely the beginning though, as your first run-through is essentially an extended tutorial. You come out of the finale only to be told to do it all again, against harder enemies. This unlocks UFO keys for loot runs, and Ark keys for more PvP fights - both things which get very little explanation. It’s churlish to complain about having too much to do, but the lack of personality compared to the likes of Destiny or The Division means once the loot loses its appeal, there’s little to keep you grinding away through the same areas again and again.

As a weekend obsession, Alienation offers plenty of fun and enough depth to keep you firing away till the end of the story. Housemarque grafts a decent looting system onto their usual twin-stick template, and the rush of weapon-hunting with pals is easily worth your time and money. Once you get your bearings with it, you’ll be very happy to find these aliens invading your PS4.

The world won’t stick with you, but beautiful visuals and excellent twin-stick looting make this a co-op blast…once you figure out what you’re doing. You could get lost for weeks in its end-game content, but only the most obsessive will care about climbing Alienation’s leaderboards.