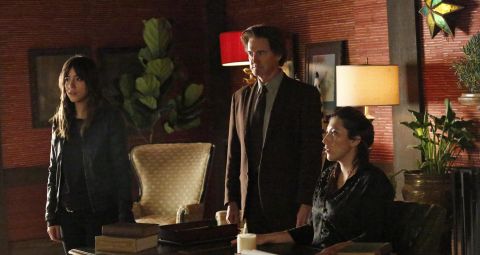 This episode was all about the ending. It could have 35 minutes of Hunter washing his undies or Simmons making a sandwich for Fitz beforehand for all we care. With that ending it would still have been a great episode. So now Gonzales is dead, killed by Jaiying who’s framed him to look like the bad guy and a human/inhuman war is erupting. This is looking good for the season finale.

To be fair, though, much of the episode was spent setting up that ending, making sure it had even more dramatic clout. We were carefully misled into thinking Gonzales had some nefarious plan up his sleeve – or even Raini – when all along those nagging suspicions that Jiaying wasn’t the magnanimous leader she’s been pretending to be were proven correct. It was masterfully done. Even if you’re well-versed in the twists of TV drama all three – Raina, Gonzales, Jiaying – had reasons and motives for betrayal, so it was never clear who was going to pull the trigger that started the war.

Although the outcome was a tragedy, there was still something dramatically satisfying about Raina and Gonzales both turning out to be good guys at heart and Jiaying being the über-bitch. On the other hand, it’s not difficult to feel some sympathy for her position (if not her actions). Although Gonzales came bearing an olive branch his adamance that SHIELD must “index” the Inhumans still came across as a pompous and authoritarian. We’re sure human right groups (or even inhuman rights groups) would have something to say about personal freedom. We also couldn’t help hearing Number Six’s monologue from The Prisoner: “I will not be pushed, filed, stamped, indexed, briefed, debriefed or numbered!” We’re not saying SHIELD and Gonzales don’t have a point, just that maybe they could be a little more flexible.

Although the word has been used before on the show, this is the first time it’s been confirmed (by Skye) that the Inhumans refer to themselves as Inhumans.

It’s great to have the Inhuman saga centre stage again, as this has been a far more interesting plot strand in Agents Of SHIELD this season than all that guff which has been in the service of Age Of Ultron. This episode immediately follows on from the action in the film and a few of the early scenes – bogged down with hamfisted, on-the-nose references to the Avengers – feel like unwanted bits of necessary housekeeping. Admittedly it’s great to see the helicarrier on the show, and the Sam-Koenig-goes-to-work scene is amusing, but neither are really essential. (Besides, what you really want to see is Coulson and Fury both rubbing Gonzales’s nose in it but it looks like Samuel L Jackson’s appearance last season was a one-off – it’s difficult not to feel he’s conspicuous by his absence.)

Ward and Kara kidnapping Bobbi gets a little lost in the mix, though this plot line did deliver a great “Huh?” moment when May appeared to be in two places at once. In retrospect it’s obvious one must be Kara but the initial confusion still takes you by surprise, and the script quickly reveals the truth in the next scene so you can’t feel too smug for working it out.

Cal gave good value in relatively few scenes. If he is killed off in the finale it’ll be a shame to lose Kyle MacLachlan, but presumably he’ll be devoting his time to the revived Twin Peaks. We’re still hoping, though, Cal will live and make a few guest appearances.

Mack resigned. Um… not feeling much there. There haven’t even been any amusing bromance scenes between him and Fitz recently so he still feels like a fifth wheel on the show. Do the writers have plans for him? Or will his character be allowed to just fizzle out? If he is going to stick around on the show hopefully they’ll give him some more interesting stuff to do.

So, next week… season finale part one. In the States the final two episodes were shown one after the other. In the UK they’re being shown over consecutive weeks. Are we going to be able to bear the tension?

Cal: [Having just smashed a piece of furniture] “I’m sorry, that looked very old. Was it old?”

You Have A Sister

The little note on Sam’s mirror is a reminder to phone his sister. Did this vision pop into anybody else’s mind?

You’ve got to love a beautiful shot of a helicarrier.

When Raina told this guy that she’s seen a future vision of his son with blue light spilling out of him we were wracking our brains trying to think if that was a reference to a particular Inhuman from the comics. Any of you want to posit a suggestion?

And this thing didn’t stir any memories from the comics either… but it was really intriguing.

We’re including this screen shot of Hunter’s doodle purely because it amused us. Though it is, of course, incredibly un-PC.

Although it’s not quite the same, we can’t help but recall that a similar dancing hula girl toy was seen on Cal’s desk in his office in “The Frenemy Of My Enemy”. Coincidence?

Marvel’s Agents Of SHIELD airs on Friday nights on Channel 4 in the UK.