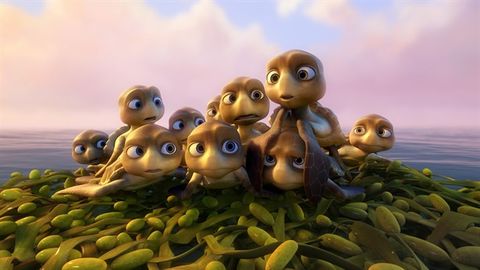 A plucky sea turtle spends 50 years drifting around the world’s oceans watching man screw them up in this 3D animation from Belgian director Ben Stassen (2008’s droning Fly Me To The Moon).

The eco-message is unimpeachable, but that doesn’t stop it being as aimless as its hero.

With endless shots of underwater landscapes propping up an episodic narrative, this is less Finding Nemo than one long screensaver.

In the absence of an interesting reptilian protagonist, Stassen over-compensates with one bizarrely accented bit-part after another (a French pussy, a Scottish seagull, a benevolent turtle voiced by Daybreak’s Christine Bleakley...).