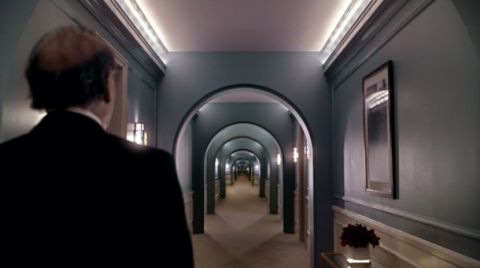 THE ONE WHERE We discover who is behind the attacks on Gavin and his empire, and Jane tells the truth about what happened to her.

VERDICT An incredibly frustrating episode that manages to introduce a great new character, while simultaneously patronising its audience.

Following the events of the Halloween party, Olivia is examined by Doctor Sexy, who agrees to share information about her test results with Gavin before telling the patient herself. When the good doctor borrows $50,000 from Gavin in order to pay off his student debts, we know that Gavin will require more from him than mere financial recompense. When the loan is gambled away, Gavin is pretty much guaranteed a favour in return. Annoyingly, that favour is called in before the end of the episode. The writers continually insist on setting up situations that pay out immediately, as if they have no faith in their audience's ability to follow a story that takes longer than 40 minutes to play out. It would be nice to see one of Gavin’s deals take time to come to the boil. Of course, this might be what's happening with Brian and Alexis, but there has been no indication yet that Brian has any sort of agreement with Gavin.

What is interesting is Olivia's reaction when told by Gavin's new opponent, Victor Shaw, that Gavin is a monster: she doesn't seem at all surprised, and when her husband tells her the truth about what was stolen from the Drake she's worried. She is obviously aware that the box is a powerful thing, and that it – we assume – is connected to the source of Gavin's power. It was never previously clear how much Olivia knew. Now we know that although not active in Gavin's schemes, she's at least complicit.

Meanwhile, every trace of Jane's attack has disappeared from the Drake. When she tells Officer Smoulder the truth about what happened to her, he doesn't dismiss her story (he once saw a ghost, himself) but when she tells Henry, he suggests she get professional help because there is a history of mental illness in her family.

Of course there is.

It's short-cuts like these that have so far prevented the show from reaching its full potential; viewers are fed clichés instead of clues and not trusted to connect the dots.

LOST THE PLOT No sign of Brian and our favourite bunny boiler this week, and it's been two weeks since we've heard from Nona and her grandma.

BEST LINE
Gavin (to Kandinsky in prison): “I want you to come and work for me.”
Kandinsky (indicating his surroundings): “One small problem.”
Gavin: “I'm good at solving problems.”