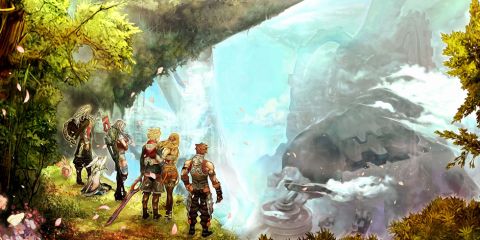 Remember Japanese RPGs? We all thought they were kind of awesome when games like Chrono Cross and Star Ocean 2 and Suikoden were the norm. But that’s ancient history. In more recent times JRPGs have stumbled, stagnating to the point that they are once again truly niche. That’s probably why Xenoblade Chronicles, the most vital and exciting JRPG in years, only barely made it to America after the biggest fan outcry since that whole Greedo shot first thing.

Like Final Fantasy XII before it (specifically its much-improved International edition), part of what makes Xenoblade great is its willingness to experiment. While it’s definitely a JRPG, it happily incorporates a lot of new ideas, many from Western-style MMORPGs. Turn-based battles are out, real-time autoattacks are in. Monsters are easily avoidable when you don’t want to fight, but aggro if you’re too bold. Magic points are replaced with ability cooldowns, and a huge overworld beckons with half a zillion nooks and crannies to map.

The story feels thin at first, but carries the day thanks to the characters’ good-natured camaraderie - which reminded us of Skies of Arcadia - and some strong emotional notes toward the end. But you won’t only be playing for the story: you’ll be playing because you’re addicted to Xenoblade’s sublimely streamlined grind. It’s easy to blast through a dozen simple side quests in an hour, reaping the rewards and watching your characters’ stats fly skyward. Many quests don’t even require you to return to their giver; just complete its requirements and the rewards are magically wired to your inventory.

The battle system is just as slick and hassle-free. Your character autoattacks whatever you target, and you can trigger cooldown-limited, special attack “Ether Arts” at your leisure. Some Arts inflict a status called Break, others turn Break into the more debilitating Topple, and yet others turn Topple into the completely paralyzing Daze. With the proper configuration of your three-character party you can lock enemies into a continual cycle of Break-Topple-Daze, which can be a winning strategy in tougher encounters.

In another novel twist, the more your heroes like each other the better they’ll perform in battle, leading to more frequent, higher-damaging Chain Attacks. Just fighting together improves their relations, but you can move things along by having them exchange gifts. Most named NPCs also have feelings about your party, which improve as you help them out. Filling in the huge character relationship chart that tracks all of these details will be part of the fun for obsessive do-everything types.

The game’s beautiful and creative environments are another huge asset, in the most literal sense. Xenoblade takes place in a civilization that’s sprung up on the corpses of two massive, ancient giants, and this unorthodox history gives the visual designers massive leeway to create sometimes strange, often stunning vistas. If you like the blue skies of classic Sega games you’ll fall in love with Xenoblade’s verdant grasslands, luminous interiors, and otherworldly atmosphere. It’s kind of the Wii equivalent of PS2’s Dragon Quest VIII, another late-life release with a great soundtrack and a dazzling overworld.

The only real fault with the visuals comes due to the Wii’s well-known hardware shortcomings, and while Xenoblade pushes the system hard, there’s no denying that 720x480 looks busted on today’s HD screens - the edge aliasing alone is sharp enough to cut glass. That the environments and battle pyrotechnics look great anyway is a testament to the game’s fantastic art direction.

All is not well in paradise, unfortunately, as two distinct flaws took some wind out of our sails. First, the AI that controls your two other characters in battles has shortcomings. It is fairly solid, all things considered, often throwing out Topples when you inflict Break, healing at appropriate times, and so on. But it’s still just an AI, and we sometimes wished we could do more than just hope that the AI would do the right thing - it didn’t always.

Further, the AI only has so many pre-set routines, and it simply cannot operate outside of them. These routines do not account for certain highly useful Arts combos, so if you want to take advantage of such tactics you’ll need to control the character in question by hand, which we did not always want to. This is at its worst with the mage character; the AI does not play them well, so we felt resigned to controlling the mage whenever they were around. Xenoblade’s combat would greatly benefit from a system that lets you customize your allies’ AI in great detail. Ultimately, Xenoblade’s battles lose some luster simply because they never grant you full control of your party.

But the game’s most egregious flaw is its distinct lack of difficulty. We spent 10 hours in just the first town (not hard to do), seeking all the quests and increasing our popularity. This was a mistake. Performing anything more than the bare minimum of quests rapidly leveled up our characters to the point that the game lost all semblance of challenge by the second major area. This state persisted for most of the game, which often turned the formerly enjoyable questing into going-through-the-motions tedium. Sure, you could skip all the optional stuff, but who wants to do that? The balance is so lopsided that we felt punished for simply consuming the game’s seemingly never-ending content.

While the lack of difficulty is a major bummer, it doesn’t overshadow Xenoblade Chronicles’ many other accomplishments. It offers a singularly beautiful world, streamlined, interesting gameplay, likeable characters, and a fantastic soundtrack - for these reasons alone it’s probably the best RPG on the Wii. Lest you think we’re damning it with faint praise, there’s no denying that Xenoblade is invigorating and engaging like few recent games of its kind, giving us reason to hope that this once-proud genre may yet have better days ahead. Visit the strange world of Xenoblade for 100-odd hours and see if you don’t feel the same.