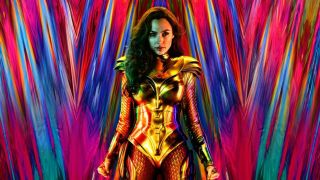 You don’t need your Lasso of Truth to find out everything about Wonder Woman 1984 – it’s all here! From lightning-filled trailers to a look at Diana’s golden new look, and even a rundown of all the faces (new and old) that make up the cast of the Wonder Woman sequel, there’s plenty to round up before the June release.

There’s even a greater look at the biggest mystery surrounding Wonder Woman 1984. No, not how shoulder pads are somehow back in fashion, but the return of Steve Trevor. After seemingly dying at the end of the original Wonder Woman, he’s alive and kicking. Could it have something to do with Pedro Pascal’s slimy Maxwell Lord? Let’s find out, shall we?

Super excited to announce that, thanks to the changing landscape, we are able to put Wonder Woman back to its rightful home. June 5, 2020. Be there or be square!!!✨🙅‍♀️✨ pic.twitter.com/Wj8ORUQLdgOctober 22, 2018

First things first, watch the Wonder Woman 1984 trailer just above if you haven’t seen it already. We’re about to recap what’s in it, and why it could be important for Diana’s big sequel.

Done? Good. So, big picture: we’re in the 1980s and Steve Trevor is back. Maybe. The trailer definitely doesn’t shed too much light on how the WW1 soldier has been brought back from the dead after his demise in the original Wonder Woman. It might have something to do with the magnate Maxwell Lord, played by The Mandalorian himself, Pedro Pascal. During the trailer he makes reference to “everything you always wanted.” For Diana, that’s surely poor old Steve.

He’s seen – complete with bum bag – in a handful of trailer scenes, including his confusion at the art of the 1980s, even mistaking a plain trash can for a masterpiece. However, it appears to come a cost: Lord says he will take something in return, and Diana is later seen fending off several guards. Has the Amazonian turned to the side of evil?

Then there’s the small matter of Di’s new BFF, Kristen Wiig as The Cheetah. Yep, the marketing isn’t even attempting to hide that the woman Diana is speaking to (and quite friendly with) at the beginning of the Wonder Woman 1984 trailer will eventually betray her.

The trailer even ends with a shot that will tide us over until June: Diana in her golden suit, presumably for a final battle with Cheetah. Where did she get it from? Maybe it all ties into the Themyscira flashbacks dotted throughout the trailer, with Robin Wright’s Antiope also confirmed to return. Speaking of which, let’s dive into who’s back…

The Wonder Woman 1984 cast is heaving with familiar faces and more than one shocking return. Unsurprisingly, Gal Gadot is back as Diana/Wonder Woman for her fourth DC rodeo.

What’s more surprising, however, are the two dead characters confirmed to return. Chris Pine is back as Steve Trevor and appears to be alongside Diana in the 1980s. Robin Wright, who plays Antiope, is also back despite dying from a hail of German gunfire in the 2017 movie. She appears to be in a flashback judging by the quick smash cuts of Diana training on her island as a young child and leaping through the air in what is the then-present day of 1984. Also returning from Diana's native island is Connie Nielsen as Queen Hippolyta.

She’ll be joined by Kristen Wiig, who plays Wonder Woman’s nemesis, the villainous Cheetah. Cheetah appears to be friends with Diana at some point in Wonder Woman 1984, but the writing is surely on the wall when it comes to an upcoming double-cross. Announcing the casting on Twitter, director Patty Jenkins said: “So excited to confirm the most thrilling news. Yes! It’s true. So incredibly lucky to welcome the sensationally talented Kristen Wiig to our Wonder Woman family. Can’t wait to finally work with one of my favorites. And SO excited by what we have planned.”

Another possible no-good schemer is that of Pedro Pascal’s Maxwell Lord. Interestingly enough, he’s best known in the comics as a businessman who manipulates several DC heroes including Wonder Woman. However, he (possible spoilers) meets his end at the hands of Diana.

Check out the new character posters from #WW84 - in theaters June 5. pic.twitter.com/O27ARDQHpADecember 8, 2019

Get ready for these to adorn your bedroom wall, office, or wherever else you want to hung them up. The official Wonder Woman 1984 posters are beautiful. You can see the first four character posters above.

Diana is first up with her golden suit, while Steve Trevor looks suitably confused in his rendition. Cheetah is up next, with what could be the first look at her villain outfit – take a look at the animal print. Finally, Maxwell Lord looks just as smug as ever, with a green background showcasing his taste for all things money.

Wonder Woman 1984 plot: how does Steve Trevor return from the dead?

Nothing has really been revealed yet when it comes to the Wonder Woman 1984 plot. On one hand, that’s refreshing – trailers too often spoil the major scenes in piecemeal up until release (and there’s still time for that, of course) and on the other, it’s going to make for a maddening wait until June.

But we can certainly come up with some watertight theories thanks to the just-released trailer. In it, it appears that Maxwell Lord will be offering Diana something that she truly desires (i.e. Steve) if he gets something in return. It’s not clear what that exchange is, but it is clear that Steve is back. We’ll also see more of Diana’s early development, as several flashback scenes are scattered throughout.

The big question, though, is that of Steve’s return. How is he back? And why?

For what it's worth, Jenkins refused to answer the question of Steve's return when she appeared at San Diego Comic Con 2018 alongside Pine and the rest of the cast, but she did at least say that “it’s a very important part of our movie".

Pine himself has revealed he knew Trevor would be back for the sequel as early as when he was shooting the first movie, telling BBC Radio 1: "Patty had told me her idea somewhere in the middle of the first one and… when Patty gets an idea it’s a pretty powerful thing because you can see the kernel land in the dirt and then all of a sudden it just starts growing and becoming a tree you know, and she could make you do anything."

One thing we do know is that Wonder Woman will at least start out her 1984 journey in America. In the first film she was based in Paris during the present day and we witnessed her origin story through her own flashback, which took us to Themyscira and then Europe during WW1. But Jenkins reveals to EW that for Wonder Woman 1984 “the story will take place in the US,” saying: “She’s Wonder Woman. She’s got to come to America. It’s time.”

This statement fits with the images and footage we've seen so far, which feature classic American shopping malls and Washington museum The Smithsonian, so perhaps the Cold War rumour will prove to be false. After all, Diana would need to be in Europe to fight Soviet forces, but maybe the Wonder Woman 1984 plot merely begins in American before she travels to Europe, or perhaps there’s even some secret Soviet spies trying to infiltrate and bring down the US from the inside?

As for the rest of the Wonder Woman 1984 story, it will hopefully feature the superhero’s classic transportation vehicle, the invisible jet, after Jenkins told Yahoo! Entertainment: “The invisible jet is very important [to Wonder Woman] and ultimately we have to have the invisible jet”. It may have been spotted in the trailer, too, as both Steve and Diana gaze at the fireworks overhead while sitting in a cockpit.

Finally, we can’t go without having one last look at Diana’s new golden suit, can we? Resembling the battle armour of the Amazonians, Diana’s golden suit gets an ‘80s-style glow up: heavy, broad shoulder pads, thigh-high boots, and a blindingly-bright colour palate all feature. It even comes with detachable wings.

Recovered from that style overload? Phew. You might be interested to know it’s actually a throwback to the comics, specifically the mid-‘90s series Kingdom Come. That also featured a time jump – but forward in time. There, Diana had her own Golden Eagle suit which allowed her more protection from incoming attacks. It helps that it also looks very, very cool.