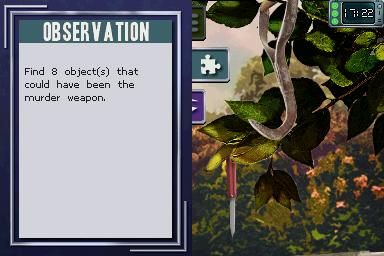 Based on James Patterson’s series of murder mystery novels, Women’s Murder Club: Games of Passion is supposed to be an adventure game about a detective named Lindsay Boxer who solves a series of murders with the help of her girlfriends who work in various murder-related professions. The problem is that the story isn’t strong enough to keep mystery fans interested, and the gameplay isn’t really good enough to warrant anyone else playing it.

The bulk of the gameplay is nothing more than a seek-and-find game, where you scroll around the scene and locate a bunch of items off a list. Half the time the items don’t even relate to the story at all – the first thing you do at any scene is “clean” the area so you can “work better,” which means finding a bunch of stupid hidden images like yin-yangs and astrology symbols. Ugh. What kind of detective CLEANS at the scene of a murder? Inane.

And did we mention the touch detection is terrible? Often we had to tap an object five or six times before it worked, and often it wasn’t until we tapped slightly outside of the object to one side that it finally detected the selection (this happened even with large objects). If the answers weren’t always so blatantly obvious, this probably would have caused a lot more confusion than it did. As it is it was just annoying.

A handful of other minigames break up the item seeking, like an abbreviated version of mahjongg, a memory game and a sliding puzzle. None of them are terrible, but they’re just too insubstantial to be engaging. There’s also a bonus mode that’s only playable on DSi, where you get a generic list of things to take pictures of with the DSi camera (person, small object, etc) and then your pictures are used to illustrate a very short crime story. The idea is that it will be funny if you take a picture of your friend and then he turns out to be the rapist in the story. Hahaha!!!!

So, unless you like condescendingly easy adventure games where the gameplay is only loosely tied to the story at best, you’re better off reading a mystery novel instead.