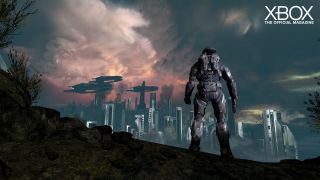 Looking back, I probably had too much time on my hands in late 2010. How else could you explain my horrendously misguided attempts to nab every last one of Halo: Reach's Achievements? At the height of my lunacy, I can vaguely recall staying up until 2am trying to nab the 'If They Came to Hear Me Beg' cheevo. In case you were wondering, said pretend reward unlocks by 'Performing an assassination against an Elite to survive a fall that would've been fatal'. Hoo-boy was that painful.

Why am I looking back with red- faced shame at this obsessive, utterly silly pursuit a decade on? Because Halo: Reach recently made its debut on Xbox Game Pass, complete with an Xbox One X enhanced patch that transforms the downbeat shooter prequel into a 4K Spartan sensation. I will get to why playing this newly prettied up version of Noble Team's shooty adventure has so vividly reminded me why Reach is hands- down my favourite single-player Halo. In the meantime, back to that stupid bloody Achievement.

First up, Elites are tough. Be in no doubt of that. These mid-tier Covenant cronies act as battlefield lieutenants, using their Predator-esque, oh-so- slimy mandibles to bark out orders at packs of hapless Grunts. They're also really hard to ding in the heat of battle. Constantly fidgety and aware, they never stay in the same spot for long. That's what makes the airborne assassination Achievement such an outrageous pain. Dropping onto the shoulders of an Elite with the monosyllabic Noble Six, then subsequently shanking the brute, is akin to knocking out a blue bottle fly with your pinkie... blindfolded... with a litre of rum rotting in your gut.

There's a precise moment at the beginning of Halo: Reach's last mission – called 'Tip Of The Spear' – where the odds of nabbing the Achievement become a teensy bit more favourable. You suddenly go from lotto-winning long shot to a merely extremely difficult task you have to repeat dozens of times before you nail the very specific technique. The task involves hurling Noble Six off a cliff edge before aligning your trajectory mid-fall to land squarely on an Elite's shoulders some 150 feet below. It's an utterly maddening, horribly haphazard challenge that still turns my grey matter into a bubbling mush even ten years on.

I can still remember the exact moment I finally got that Achievement. It was the only one that had eluded me up to that point, and after sinking dozens of hours into both Reach's excellent, never-bettered campaign and its enjoyable online firefights, I considered it an affront to my very existence those piddling 25 Gamerscore points weren't mine. So at some incredibly antisocial hour, after kamikaze-ing myself off a steep hill roughly 173 times, my battered Spartan eventually stuck the landing in extra-precise, thoroughly murderous fashion. Down went the Elite, up went the Achievement notification, and thus ended one of the darkest sagas of my Xbox career. Oh, and to the totally random late- night reruns of The Biggest Loser I watched on my tablet, which somehow kept my sanity in check while I hurled Noble Six to his death dozens of times, you have my heartfelt, slightly ashamed thanks.

Now that we've addressed my questionable back-in-the-day cheevo hunts, let's talk Halo: Reach in the here and now. Long story short: it's still utterly ace. Ten years ago it was the tightest, most thoughtfully paced shooter Bungie had ever produced. Now, at the beginning of a brand-new decade for Xbox, and with two up-and-down Destiny campaigns in the rear view, that's still very much the case.

Reach is an undisputed single- player triumph. Sombre, reflective and filled with memorable Spartan set-pieces, it comfortably outguns 343 Industries' subsequent Master Chief adventures. Actually, that's precisely why Reach can be so bold and varied when placed to John 117's more vanilla recent efforts: blink-and-you'll-miss-it cameo aside, this is a Chief-free experience. With nary a hint of the infuriating Flood or those underwhelming Prometheans, Halo: Reach serves up ten hours of non-stop Covenant slaughter dished out between an entire squad of badass supersoldiers.

A huge part of the appeal of Reach's story is that there's no single Master Chief... there are six of them. Between the hulking, ever-hopeful Jorge-052, sarcastic assault specialist Emile-A239 and the fatigued Kat, you're given more reason to care about on-screen Spartans than Chief has managed in five outings. That each member of the unit is so readily dispensable hammers home the sense of futility that underpins Reach's story. This is the tale of trying to save a doomed planet, of the unflinching sacrifices soldiers make in the heat of battle, and ultimately, uniting a sassy AI companion with a near-mute Xbox icon.

I've long accepted I'll never save the planet Reach. I know Noble Six's doomed last stand is always going to end with Elite swords in my Spartan spleen. But futility be damned! Because hot damn is Bungie's prequel a pleasure to replay in 4K on Xbox One X. Where once muddy textures and messy motion blur combined to create soupy, hard-to-read battles, now Ultra HD, incredibly crisp Covenant shootouts light up my flatscreen TV. Jetpack around a dying city in 'Exodus'.

Enter into large-scale smackdowns with alien forces on the battlefields of 'Winter Contingency'. Blast spaceships in the luminous light of Reach's upper atmosphere in the surprisingly brilliant 'Long Night of Solace' level. No matter the mission, replaying Halo: Reach's drum-tight campaign on Xbox Game Pass is a fab 4K good time.

Even if you don't own Microsoft's supercharged console, you should absolutely revisit Reach on a normal Xbox One. Noble Team's doomed quest now runs far more smoothly than it did on Xbox 360, and after Halo 5: Guardians' ham-fisted campaign, you deserve to remind yourself what a great Halo story mode looks like. Just promise me you won't chase that damn Elite-offing Achievement