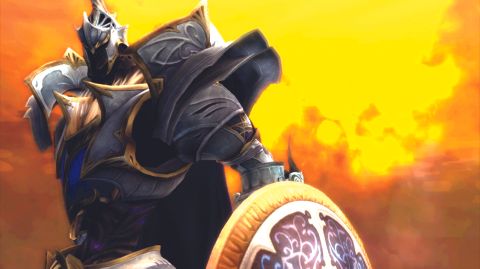 About eight hours in, hero Leonard punches a dragon in the face. It’s the only bit of fun in the entire game. This long delayed JRPG doesn’t live up to the high expectations it set at E3 2009. The problem is that it’s dated. From the poorly dubbed voices to the menu-heavy battle system, this feels like you’re playing a ten-year-old game.

To begin with, you’ll fail to empathise with the cast of dense, stereotypical characters. All the usual JRPG personas are here: the errand boy turned hero, the gal pal who secretly fancies him, the whimpering princess who cries non-stop. It doesn’t help that they’re all badly animated, looking and moving like jerky wooden dolls. It’s especially off-putting that, when talking, their lips simply open and close like a goldfish – barely in sync with poorly dubbed dialogue.

All this could have been overlooked if the battle system was interesting and functional. But it’s unbelievably menu heavy – often it’s difficult to see what your party is doing because the screen is plastered with HUDs. Not that this matters, because battles are surprisingly easy, cheapening what could have been a pretty cool feature – transforming Leonard into a gigantic (and thus nearly invincible) knight.

Simply trying to teach your party members new skills is a tedious affair. It requires you to assign Skill Points to desired talents, then go through four more screens to allocate newly learnt skills to one of 21 slots – only then can you use these actions in the battlefield. Oh, and you have to do this individually for every single character.

WKC could have redeemed itself with its online segment. Plug in your network cable and you can create your own town (which functions as a hub). Hook up with other RPGers, and together you can complete side quests you ‘buy’ from in-game guilds. Sounds nice, but there’s very little point, given the meagre rewards. It certainly doesn’t stand up to Demon's Souls' innovative use of online multiplayer.

It’s a real shame to see Level-5 favour an old-fashioned approach for its first next-gen RPG. Especially when they have genre pushing, innovative classics such as Rogue Galaxy and Dark Cloud under their belt. Really, you need two key ingredients to create a successful RPG – a strong story with rich personalities, and robust, interesting battle mechanics. WKC has neither.