When you purchase through links on our site, we may earn an affiliate commission. Here’s how it works.

Remedy's Control (opens in new tab) has become something of a sleeper hit since it launched back in August, and as its Game of the Year buzz continues to grow louder, so too do the many unanswered mysteries leave us even more curious all the time. You'd think with more eyes on the game, somebody would've put some of the pieces together that have been left to us by the Finnish studio that so loves puzzles, but as it turns out, there are still a lot of questions needing answers.

Some seem destined to be answered later, like in the game's content roadmap we recently got a glimpse of, while others may be hiding their resolutions in the ever-shifting Oldest House right now. Here's a roundup of every unanswered mystery we know of today. Think you've got the answers to some of these? Give us your wildest theories.

Where Did Marshall Go?

In the post-game of Control, many of your allies and quest-givers have new dialogue to hear, and it's in these moments where we get a new mystery raised to us: where is Marshall? Speaking to Arish in the Executive hub, he tells you she was last seen in the Atlas Chamber but has since gone off the grid as she is apparently known to do. We even get to hear Jesse's inner monologue where she hopes Marshall is okay.

This exchange led many players to go explore the Atlas corridor looking for some sign of her, but so far it's been to no avail. We've painstakingly turned over ever desk looking for a clue, but we're wondering if we are just too early, like maybe forthcoming DLC will dive further into Marshall's disappearance, as she is said to disappear into the quarry for days at a time, and the upcoming Expeditions mode seems to take place there. Unless…

What's Up with The Atlas?

If you end up in the Atlas Chamber looking for Marshall, you'll eventually come to see the giant statue of what appears to be The Oldest House's current layout, or perhaps the Astral Plane itself -- it's hard to say. Red strings connect pictures and documents of Jesse to different sections of the statue like an unhinged detective's corkboard, but so far no one has made hi-res images of those documents. The statue seems to be hinting at a particular movement pattern which perhaps players must perform through The Oldest House.

A document titled "Atlas Theory" grasps at answers but ultimately just leads to more questions. It says The Atlas is a "physical expression created by the Oldest House. Its function is currently unknown though its shape and dimensions seem to indicate an "explicit purpose." What is that purpose? No one knows yet. It reads like Remedy is toying with lore-obsessed fans, just as they're known to do. Could this relate to Marshall's disappearance, and if so, are we wasting time looking now, or does the answer lay buried somewhere right this moment? One thing we know for sure is this mystery should, quite literally, become clearer now that photo mode has arrived on all platforms.

Why Does a Human Body Power the Oldest House?

You have to really go digging through every desk and scanning every whiteboard to pick up on the fact that the "NSC" in NSC Power Plant stands for Northmoor Sarcophagus Container. Yeah, the body of Trench's predecessor powers the entire Oldest House. The how is fascinating, as is the why, and we don't have answers to either just yet. NPC dialogue hints that he's also not dead, despite his resting place being called a sarcophagus.

Is Northmoor, who butted heads with Trench for years before relinquishing his duties to him, a trusted self-sacrificing battery pack for the FBC's headquarters, or has he been forced into his current position by The Board, or Trench, or even someone else? Speaking of The Board…

Who or What Really Is The Board, and for That Matter, The Former?

Of all their confusing plot points, the most fun Remedy seems to have screwing with Control's players comes each time The Board speaks. Their messages, drowned in distortion and static, are delivered with accompanying subtitles that confusingly speak twice at once, offering something like synonyms from a parallel universe for every phrase they speak. What is their purpose? We should find out a lot more when the first expansion arrives in 2020. Titled "The Foundation," many fans are expecting this DLC will explore The Board's history and motives as the title references the literal bedrock of The Oldest House where The Board are presumed to have once dwelled, if they aren't there anymore.

Along with them is The Former, that bug-eyed monster Jesse engages with in multiple boss battles. Documents in the game reveal The Former was, well, a former Board member who was cast out for rebelling, which raises a lot of questions on its own, like what is there to rebel against? While we're at it, does The Former look like a giant bug because of how it was shunned from The Board, or do all Board members look that way? There's a lot to this one, but thankfully it's one category of mystery we seem poised to get answers to very soon.

How Are Jesse's Slide Projector and Sam's Shoebox Linked? 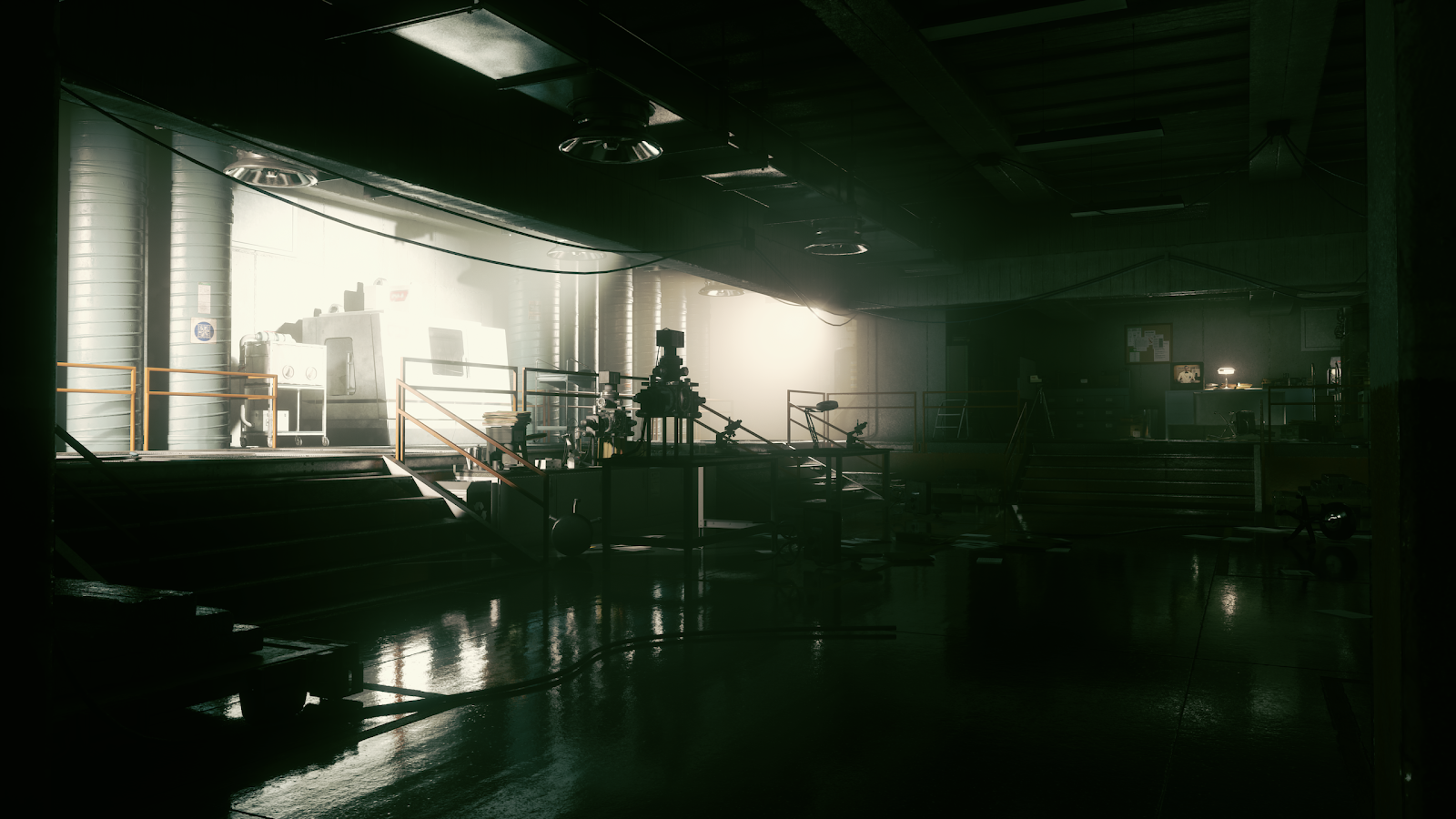 If you followed along with our previous coverage of the many easter eggs hidden within Control (opens in new tab) connecting it to the Grand Remedy Universe, you already know that the 2012 Alan Wake ARG "This House of Dreams" teased some events of Control seven years before it arrived. The connections go even deeper than that, however. Jesse is from a town called Ordinary, as is Samantha, the woman who blogs about her mysterious shoebox -- which is later concluded to be a suspected Object of Power according to whiteboard notes in The Oldest House's central research corridor.

It seems strange that within the Grand Remedy Universe, two seemingly unrelated Objects of Power were located just blocks away from each other. Is there any significance to Jesse's slide projector and Sam's shoebox sharing the same zipcode? We know the shoebox is somehow an artifact from the Bright Falls Altered World Event -- better known as the events of Alan Wake -- but should we expect Sam and Jesse to have more of a shared history than we know of right now? We're bracing for that, because Control has taught us that Remedy is deliberate with the details.

What Is Ahti's Real Role? 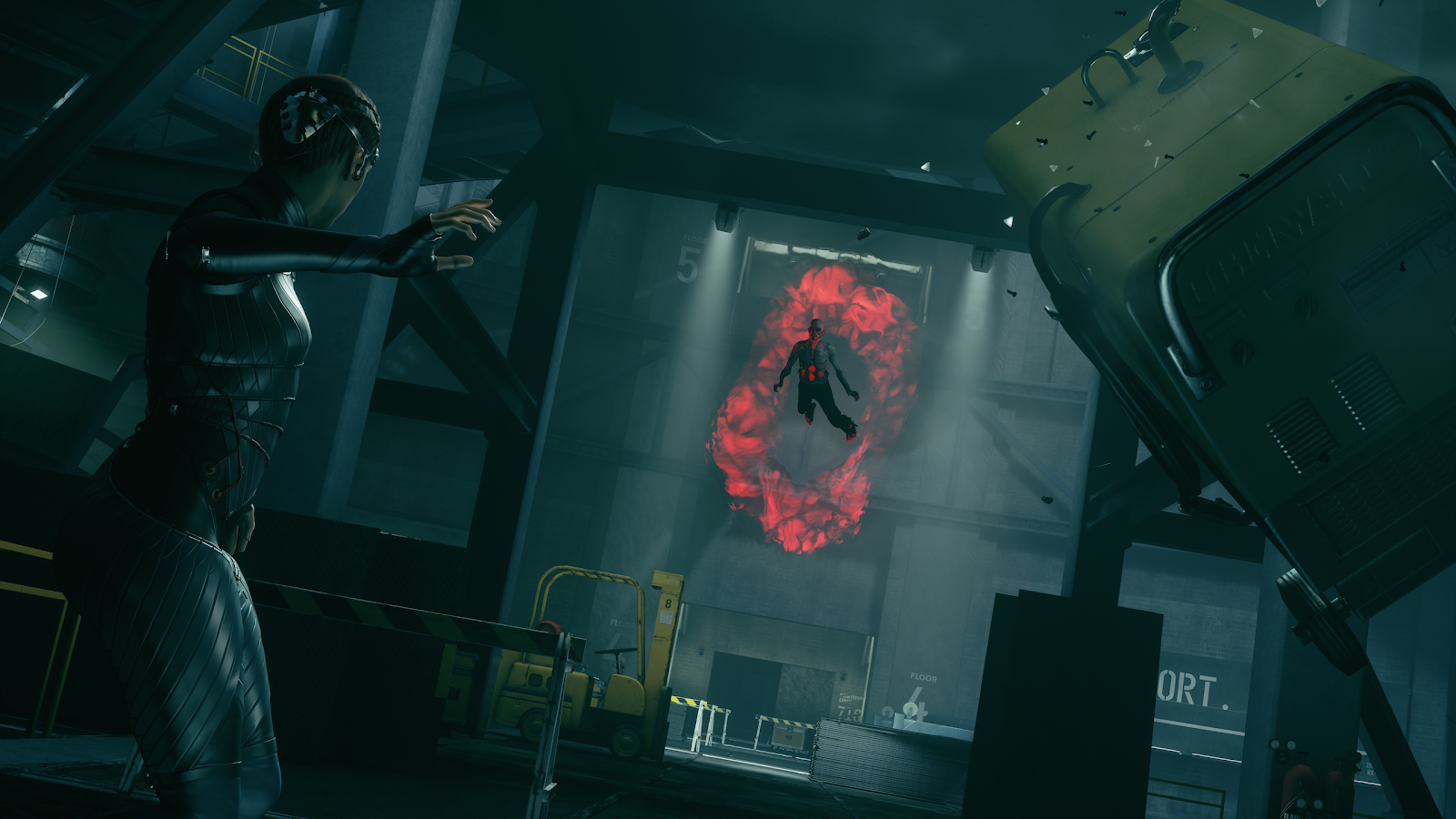 Perhaps the most enigmatic character in a building full of walking enigmas is Ahti, custodian of the Oldest House and Finnish idiom fan. At the end of Control, he disappears completely and swiftly. Jesse thinks to herself that he seemed like he had more business to attend to, but in classic Remedy fashion, we're left to wonder.

Our guess: He's some sort of physical manifestation of the multiverse in which Control, Alan Wake, Quantum Break, and Max Payne all take place. Ahti is the name of the Finnish mythological god of the seas and fishing, and as we learned from our 2010 stay in Bright Falls, "it's not a lake, it's an ocean." That line always seemed to imply that the Dark Presence existed beyond the borders of the logging town, and we're ready to consider the Hiss an alternate manifestation of that corruption. Taken that way, Ahti is sort of the overseer of this multiverse, perhaps appointed by The Board. He doesn't seem to be a neutral observer, as he does help Jesse often and he even seeks to rid The Oldest House of its mold problem. In a way, he's Jesse's guiding light similar to how Thomas Zane assists Alan Wake, but stop us before we really go off the deep end.

Where Else May We Have Seen Mr. Door? Once you know the Grand Remedy Universe exists, as it was most blatantly revealed in Dylan's speech about Mr. Door existing in "many worlds, side by side, some on top of each other," you have to accept the fact that Mr. Door and Quantum Break's Mr. Hatch are one in the same. Lance Reddick's mysterious character was fully unveiled in the last moments of Remedy's previous game to be a "shifter," the fabled enemy existing outside of time, and that's exactly how Mr. Door is described too, "endlessly shifting" between worlds. Adding that to the obvious nod in their names, and it's clear Remedy is toying with the most investigative players.

That leads us to wonder where else we may have seen Mr. Door, if ever. Does it always look like Lance Reddick? There's no reason to think so, since the brief glimpse we get of Hatch's true form is not human looking at all. Have we seen Mr. Door in Max Payne, or maybe Alan Wake? Here we are again sending suspicious glares at Thomas Zane. Why can that diver time travel anyway? We'll admit, we just put "Thomas Zane" through an anagram finder but came up empty. You win this round, Remedy.

Who Were the Other Prime Candidates? 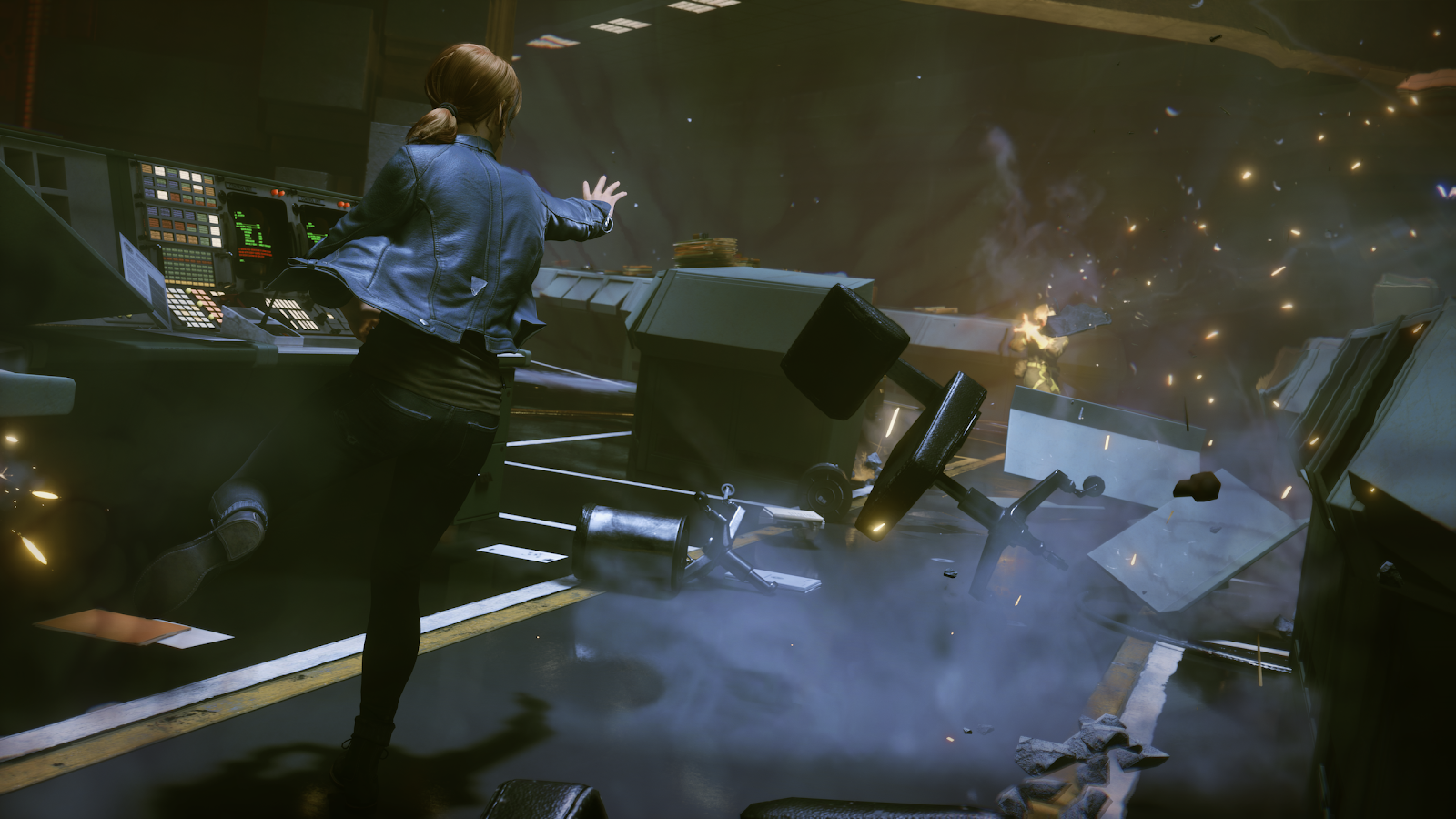 The mystery that most excites us deals with the FBC's list of Prime Candidates -- parautilitarians considered for the role of Director. Jesse eventually lands the role after she was the seventh candidate (codenamed P7 like Control itself -- sneaky!) but we only learn of two other Prime Candidates: Jesse's brother Dylan and Alan Wake.

That leaves at least four others, assuming Jesse was the last. If the candidates are ranked chronologically, we can maybe assume Max Payne, the Anderson brothers Odin and Tor, and the puzzling Thomas Zane may be others. It seems like Jack Joyce could be one too, but the events of Quantum Break seem related more so because they help unravel the multiverse, and Jack Joyce's special abilities came directly from his proximity to the time fracture, unlike the rest who appear to be paranaturally gifted.

It could also be that regardless of whether or not the candidates are numbered chronologically, we may see more of these candidates in future Remedy works. Since this sometimes feels like it's building to one huge crossover game, perhaps "Remedy's Prime Candidates" will one day have the same ring to it as "Marvel's Avengers."

Have Players Found Every Mystery, Or Do More Still Lie Undiscovered?

We realize we haven't offered many solid explanations here, but we think we're going down the right path with at least some of our madness-inducing theories, and hopefully with more time and players investigating, or through additional content, we can start to really connect the dots in what is Remedy's most intricate puzzle yet.

One last fun, if intimidating, question we have is whether there any mysteries that haven't even been uncovered yet. Never mind answers, but are there even some questions we haven't begun to ask? We reached out to Remedy for an answer to this, to which they replied "no comment." We'll recklessly take that as a "stay tuned" instead. With the game's Expeditions mode coming soon and two brain-bending expansions due in 2020, we're sure we will get some answers soon. We only wonder how many new questions will spring from our continued stay in The Oldest House.

Mark Delaney is a prolific copywriter and journalist. Having contributed to publications like GamesRadar+ and Official Xbox Magazine, writing news, features, reviews, and guides, he has since turned his eye to other adventures in the industry. In 2019, Mark became OpenCritic's first in-house staff writer, and in 2021 he became the guides editor over at GameSpot.