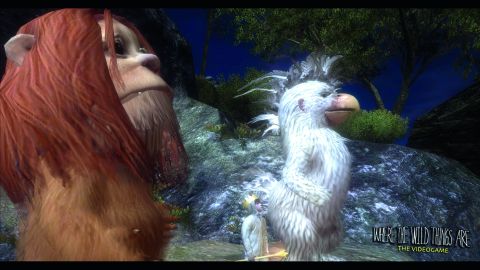 There’s nothing wrong with being a game for kids, and Where the Wild Things Are (the game of the film of the book, no less) is a decent example of finger-fangling fun for the younger player. It’s repetitive and sometimes tedious for those of us who are over ten, but it’s also inordinately charming.

Taking its cue from Spike Jonze’s movie, you play as romper-suited Max, exploring a fantasy-land island populated by the titular Wild Things. What this means for us gamers is a third-person adventure with platforming elements and a whole lot of collecting things.

The Wild Things themselves are all present and correct – even the James Gandolfini-voiced, oddly-named ‘Carol’ – and a significant portion of the game is concerned with helping them out. Carol, for instance, is building a model city but has lost all his toy buildings. Ferreting these about and collecting them gets you a reward, as do similar objectives for the other Wild Things. In between the game’s story levels, you’re free to wander around the Wild Things’ village and talk to the beasts and present them with collected items.

And that’s just one aspect of the Wild Things collectathon – there’s also shards of stars and plenty of other things to snatch up. It’s not quite Donkey Kong 64 levels of collectable madness, but there’s a lot to find.The good news is that the game’s (mostly) relaxed nature makes this more of a pleasure than a chore.

Points are knocked off, however, for incessant, annoying combat against a variety of bugs, and some clashes between unhelpful camera angles and perilous platforming. Otherwise, this is a charming little romp through one small boy’s imagination.