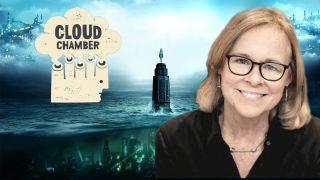 BioShock is back. The beloved first-person shooter series is officially returning with another installment from Cloud Chamber Studio, a new team at 2K headed up Firaxis Games' alumnus Kelley Gilmore, alongside several key members of BioShock's original development crew. This is big, big news for BioShock fans, who've been waiting for the arrival of a new chapter for over half a decade since the release of 2013's BioShock Infinite.

While specifics of where and when this new BioShock game will take place are light (although you could certainly interpret Cloud Chamber's logo as a potential setting tease), we got to speak with Gilmore about what this next chapter might look like in the hands of her talented team. We touch on everything, from next-gen to the question of Ken, so read on for everything you need to know about this surprise new chapter in 2K's acclaimed shooter series.

Kelley Gilmore has spent over two decades working in the games industry, with more than 40 shipped titles to her name. Since 1999, she has overseen production on multiple games in the Civilization and XCOM series at Firaxis, but this new role at Cloud Chamber makes her the first woman in 2K history to lead a development studio.

What was it that drew you to this opportunity to lead Cloud Chamber on the development of a new BioShock project?

Kelley Gilmore: I've had a wonderful gaming career in the 2K family through my 18 years at Firaxis. When the company decided to make the next BioShock and started assembling a new team, I was thrilled to be asked to consider leading the studio. The chance to shepherd such an iconic franchise and become the first woman to lead a studio for the company was exciting, a bit daunting, and an opportunity of a lifetime. I'm incredibly grateful and honored to be in this position and look forward to building the next great 2K studio.

What does BioShock mean to you, and how does that inform the kind of new BioShock experience you want to make at Cloud Chamber?

Gilmore: BioShock defined what a compelling narrative and immersive world can bring to a video game. Players interact with it in their own unique ways and have unforgettable experiences. That will remain at the core of our design vision for the next BioShock, and we have a myriad of ideas on how best to achieve it.

Why is now the right time for a new BioShock game?

Gilmore: 2K has been thinking about extending the BioShock franchise for some time. The company has a stable of great studios that are already dedicated to working on some amazing games. When the decision was made to make the next BioShock, 2K began assembling a new group of talent to make it happen.

It's been awhile since the last release, but BioShock is still one of the most popular, critically praised and highest-rated franchises of the last console generation. The franchise has a lifetime sell-in of over 34 million units, and Cloud Chamber is honored and excited to create the next great game in the series.

Bioshock has famously dissected different philosophical theories through its storytelling. Is this a tradition you plan to continue and, if so, is there any particular subject matter you'd like to explore?

Gilmore: Narrative has been one of BioShock's most notable strengths throughout its history. We already have several amazing storytellers on our team who will have much more to share down the road about where we're taking the next game.

How do you think your previous work at Firaxis might influence this new instalment of Bioshock?

Gilmore: Firaxis has been recognized over the years as one of the best video game developers in the world, as well as a wonderful place to work. In my time there, I gained a very important understanding of what makes it great, and that's putting people first.

Steve Martin and Sid Meier have created a place where people genuinely enjoy coming to work every day, and as a result, the studio continues raising the bar on making amazing games that we all want to play. My nearly two decades working on Firaxis' award winning AAA franchises like Sid Meier's Civilization and XCOM have prepared me well for the exciting challenges ahead of us at Cloud Chamber.

How do you hope or plan to utilise next-gen technology to enhance and further explore the core pillars of BioShock?

Gilmore: One of the great things about our industry is how much it evolves on a regular basis. We constantly have new technology and innovations to explore, as well as expanding ways to reach and interact with our fans. We can't discuss any specifics yet, but we're excited about the possibilities.

A lot has changed since BioShock: Infinite, most notably with the growth of live service games focused around replay value and online interaction. Is this something you've considered for this new project?

Gilmore: This is another area of our industry that continues to evolve as players are looking for more from their gaming experiences. There isn't a 'one-size-fits-all' solution, so it will be incredibly important early in our development process to listen to our audience and understand what they're hoping to see in the next BioShock.

How important was it to bring back many of those involved in the original creation of the BioShock series for the development of this next iteration?

Our team also has game development veterans from high profile franchises like Call of Duty, Assassin's Creed, Star Wars, Battlefield and Walking Dead. As part of our recruiting efforts, we're looking for people from many different backgrounds and experiences. I'm confident that the depth and variety of game development experience at Cloud Chamber will lead to another unforgettable BioShock experience.

Have you considered consulting Ghost Story Games, and particularly Ken Levine, to assist in the formulation of this new story?

Gilmore: Ken and his team at Ghost Story Games are fully engaged in developing a new experience that will surely be another incredible game for all of us to enjoy. He is not affiliated with Cloud Chamber or the development of our BioShock title.

So far, the BioShock series has submerged itself underwater and risen above the clouds. How challenging is it to land on an equally inspired setting for the next chapter?

Gilmore: Environments have played a critical role throughout BioShock history and are incredibly important to the gameplay experience. There are many creative directions to explore, but you'll have to wait a bit longer to see where we go next.