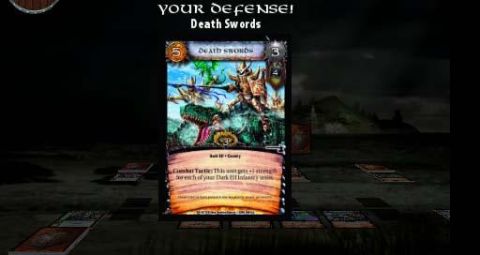 Warhammer has finally gone portable. The Games Workshop phenomenon has now hit the PSP with Warhammer: Battle for Atluma. But it's not quite what you might think. Unlike the other Warhammer games to hit the PC and PS2 the past couple of years, this little number is based on Sabertooth Games' collectible-card game War Cry, not the miniatures wargame that geeks know and love. In any case, this is a letdown whether you're a Warhammer fan or not, as the gameplay is overly simplistic and lacking in flavor.

Play should be familiar to collectible card game veterans, although there are some variations here like you would expect in a videogame. It includes a multi-battle campaign in addition to one-off battles and ad-hoc support for multiplayer scraps. Most notably, though, the big difference between Battle for Atluma and standard card battlers is how it deals with deploying army units on a battlefield.

You start with a muster phase, where you purchase cards for gold and place them in either front-line or reserve positions. At the same time, you assist your base infantry, cavalry, and assorted other grunts by equipping them with special items like banners, heroes, and magic artifacts. Then it's on to the battle phase, where you enter combat with the aid of action cards. These boost your unit strength, drop enemy strength, and generally provide bonuses that make you more likely to win when it comes down to the single throw of the dice that resolves battles.

Still, while these mechanics lay the groundwork for what could be a good game, there just isn't much in Battle for Atluma beyond the obvious. Aside from making some tough decisions between battles (there are three rounds in a standard match) regarding which cards to keep and which to retire in favor of fresh blood, strategies seem pretty basic. You deploy the infantry and cavalry in the front rank, put the archers and cannons in the back, and have at it.

Also, even though six armies represent key Warhammer races and factions like the Empire, Chaos, high elves, and orcs, there doesn't seem to be much variation between cards, at least with the default decks and the commons cards (which actually don't seem any less capable in battle than unique ones, when you get right down to it). So, until you collect enough gold through battle wins to enable you to buy booster packs and uniques and take advantage of the in-game shop and deck builder, you're stuck with limited options. Our choices always seem blatant, which means that it often feels like you're going through the motions to get to the dice-rolling.