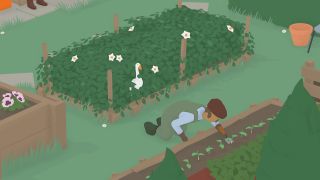 Who'd have thought that something so simple could bring  so much joy? The setup in Untitled Goose Game is easy enough to wrap your head around; It's a lovely morning in the village and you play as a horrible goose. That's it. That's all it takes to have us in continuous fits of laughter. Tasked with running around a quaint little space, you must do everything in your power to terrorise the locals – one quack and one mischievous act at a time.

It’s amazing what can happen when a small group of passionate people get together and put their collective minds and talents together to achieve something special. The story of House House, a small developer based in Melbourne, Australia, is a great example of how that spirit can grow into something that captures the imagination of the gaming world, in this instance with its second release, Untitled Goose Game.

"We were people who kept ending up in a conversation when a larger event was going on," explains House House’s Nico Disseldorp. "There would be 20 people, but by the end of the night it would be the four of us sitting around and talking about video games." With Disseldorp’s experience of web programming and Michael McMaster’s 3D modelling experience, the group’s conversations began to turn to making a game like the ones they had started playing together in-between these larger meet-ups.

"We spent the year leading up to that [decision] by meeting up once a week and playing a load of multiplayer games together," says Jake Strasser. "It was the big resurgence of multiplayer games at that time with Sportsfriends and Towerfall and Samurai Gunn were the big ones on rotation for us. It felt like a fairly achievable size to attempt as a first time game as well."

The result was Push Me Pull You, a kind of sumo-inspired ball game with worm-like conjoined characters, somewhat reminiscent of Noby Noby Boy, only in 2D. The team’s expectations were humble enough, that at worst they would have a game they could enjoy together and at best some more friends might check it out, but it actually got picked up for the PS4 and made some noise. "I think with the Goose Game, we probably always imagined this was more of a console game sort of thing," says Disseldorp. "We wanted to make our little Mario 64 where you’re just a character who runs around."

This was a big step up, but having learnt how to program in Unity having moved from JavaScript during the development of Push Me Pull You, the challenge to make its first fully 3D experience was clearly a tempting one. It’s actually a nice touch that some of the spirit of Java remains in the style of the game, according to the team. "JavaScript is really good at doing these vector shapes, which don’t look like other games generally. So, we sort of fell into this very nice new flat aesthetic because of this base we were working in [for Push Me Pull You]," explains Strasser. "With the Goose Game it’s sort of similar. I think we’re pretty good at acknowledging what our strengths are and where we want to put our energies into... And we don’t want to texture things," he laughs.

"We kind of embraced that constraint and decided that’s not where we’re going to put our energy, but what can we do to make a game look interesting when it’s flat colours, untextured?" asks Disseldorp. "There are so many different places you can take that and I think it’s interesting that for a while that flat colour, 3D, low poly aesthetic was kind of everywhere, but also all quite similar and now I think we’re seeing a resurgence of it, but people are taking it in very different directions with different kinds of lighting and different gradients and things like that."

So House House had a style and a desire to move into 3D, but the special ingredient to all of this was the goose, which apparently started with a simple stock image of a goose and the suggestion this should be what they make a game about. From that seed grew the stealth experience that’s now in production. Interestingly, it was quite an organic process to go from goose to stealth. "Originally we were like ‘You’ll just be this goose and the people will react to you’," says Disseldorp. "I don’t think we really thought about what ‘react to you’ really meant in a sense, but we wanted there to be people who would notice this goose and play along with whatever you were doing. Some of our first systems were you would move an item and the person would go and tidy up the item and that’s a nice conflict you can have. Playing with this it became very clear, very quickly that the scale was so small it felt inappropriate when people could see things behind them."

A different type of stealth game

From limiting the field of view of NPCs the leap to stealth was pretty small as you might imagine, but when you really look at how Untitled Goose Game plays out, it’s really unlike most stealth experiences you might have seen around. For a start, the point of the game isn’t actually to hide, but rather be seen, ducking in and out of cover deliberately. "That does let us use these mechanics that are really common like you hide in a little hiding spot and people can’t see you while you’re in there or you can push a button that makes a noise and get someone’s attention," explains Disseldorp. "They all get transformed by the fact that you’re not trying to stay in hiding. Instead you’re trying to use people’s attention deliberately. Sometimes you’re trying to keep their attention away from something else."

All of this is, of course, filtered through the experience of being a goose. Once the stock photo of the goose on its own had served its role, a trip to YouTube was in order to nail the animation. "There’s this fantastic Dutch troop of geese that just march through towns," enthuses Strasser. "It’s called the Ganzenfanfare if you want to look it up. That was a good way of watching geese just plod along really slowly and get a sense of how that works."

You can’t do anything a goose wouldn’t reasonably be able to do (from what we’ve seen thus far, at least) so that also means some unique controls for the game. You can walk, run, honk, flap your wings a bit and reach out for things, but that’s about it. "You push down the trigger and the goose bends its neck down, which is something that you see a lot when you watch YouTube videos of geese. Sometimes they run with their neck down low and sometimes they walk with their neck up high," Disseldorp tells us. "The movement isn’t something that you just get used to really quickly and then start to ignore. It’s something that you feel out and you become the goose as you learn the controls. And it means that these really low level actions like bending over and picking something up can be something that you can fumble in a way that’s pretty funny."

"I also like the idea that the goose isn’t actually you as the player. You’re sort of corralling this animal around," says Strasser. It adds another layer of realism to the goose itself as it sometimes reacts instinctively as a goose might rather than only reacting to your inputs, as Disseldorp goes on to illustrate.

"So, in our game if you walk too close to people you end up running away from them and I think that part of that is that birds have this impulse for self preservation that makes them afraid of getting too close to people and in our game that ends up being a bit like when Mario’s on fire he runs uncontrollably. So, that’s one of our influences there."

From a simple early concept House House is following every logical thread and taking it as far as it can, building in emergent moments for different systems to interplay, allowing humour to come from naturalistic interactions and above all allowing us as players to know that we’re supposed to be having fun as we go. "In a lot of those more serious games when you start poking at the edges and making things react in funny ways, you feel like you’re going against the game," suggests Strasser. "Our game kind of embraces that and tells you that’s fine. It means you can laugh with the game instead of at it."

Untitled Goose Game is an inherently funny game to play with the moments of comedy often arising out of simple interactions between the goose and the objects or people around it. But what sort of comedy influences did House House draw from?

“I think we tend to look at older cartoons,” says Disseldorp. “Things that don’t have too much dialogue work better with our game. I think that’s part of what makes the comedy work, is the fact that we don’t need to do anything as complicated as human dialogue.”

The farce of misdirection and calamity that then ensues all plays out like a classic silent film. “With a human and a goose it’s really believable that this is kind of a silent interaction that’s mainly conveyed with prolonged eye contact or something like that. For those sorts of things, like silent comedies or older cartoons, I think they fit what we’re doing more.”

“I think it’s all about the eye contact between the people and the goose,” adds  Strasser. “There’s so much in that relationship that people get to interpret as much as they like.”

Untitled Goose Game is going to launch later this year. To see what else is on the near horizon, check out this list of the new games of 2019.