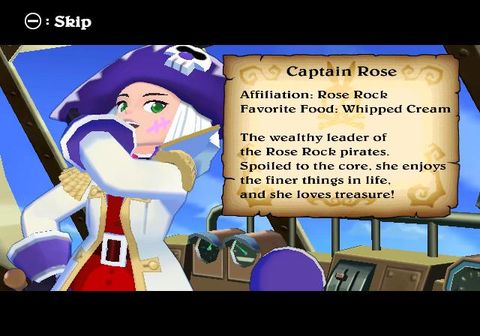 Zack and Wiki tells the story of two pirates on their search for the legendary treasure of the pirate Barbaros. The first is the silent chocolate bar eating protagonist, Zack, and the other is his golden monkey companion, Wiki, who transforms into a bell to de-curse treasures and turn enemies into useful objects. Their quest sends them on a series of mini-episodic puzzles through jungle ruins, frozen temples, castles, an airship and more. The puzzles start easy but develop into brainteasers that only a legendary pirate could solve... well, a really smart legendary pirate, or maybe one with psychic powers.

One of our only complaints about the game is that some of the puzzles are a bit dependent on trial and error, rather than using superior treasure hunting logic to figure out how to get at the shiny treasure box.

For example, in an early puzzle, we stepped on the platform, which triggered the snake head, which released the ball, which rolled down the ramp, and hit the bone, which catapulted the pot, that hit the gong, that fell on the pillar, which fell into like five more pillars, that knocked over the bucket and rolled the ball down the stairs and flattened Zack. Well, that was fun to watch, but now it's time to start over. How were we supposed to know that clicking on the platform would flatten our beloved Zack?