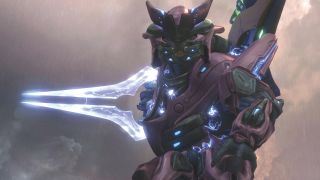 Whether you're a ninja, fighter, or adventurer, a blade is often the weapon of choice when you need to get your job done. However, you can forget simple swords – this list has everything you could want, from gravity-bothering glaives to guitars that turn into scythes. If it’s sharp, shiny and superb, it’s made the cut.

No, not the one from South Park. The Vibroblade is a staple of Star Wars lore, despite that constant, creeping suspicion that nothing should be able to deflect a lightsaber strike. The technical explanation is that it uses a swordsmithing technique involving cortosis-weave, which temporarily deactivates the iconic Jedi weapon on contact, preventing the lightsaber from slicing straight through the sword. Hmm. Perhaps that doesn’t matter. The main thing to remember is that if you give one of these to Canderous Ordo in Knights Of The Old Republic, he’ll cut through any Jedi like a heated spoon through ice cream.

If chainsaws counted as a blades – which they don’t, otherwise they’d be called ‘bladesaws’ – then the Lancer would be on this list, and it would be higher than next-to-last place, but 14th is a noble showing from the Butcher Cleaver. It deserves a pat on the back for being the only big sword in a game full of guns, and it’s wonderfully handy for cutting through Locust, though it does have the drawback that it breaks after only 12 uses. Still, you can buy a whopping great foam prop of the Butcher Cleaver – and that’s the clearest mark of a worthy weapon we can think of.

Here’s a thing. The bladed weapon you can see in the image below is not a glaive by the boring, real-world definition. Yawn. A glaive is actually a type of single-edged polearm, but anyone who watched 1980s fantasy nonsensefest Krull will mistakenly think glaives are throwing weapons. The good news is that it doesn’t matter, because using the glaive in the otherwise-average Dark Sector is brilliant. It can be thrown to chop up distant enemies, or used to solve environmental puzzles and grab in-game goodies. And while it might be inaccurately named, we’ll pretend we don’t know that, because a knife on a stick can’t do any of those things.

Scythes are the quintessential video game weapon – though they look incredible, their real-life counterpart is quietly disappointing. Try using a scythe in an actual battle and you’ll get hacked to bits. They’re unwieldy and completely unsuitable for combat. Use this one in Darksiders, however, and you’re suddenly a reaper of wayward souls, reclaiming lost health while sweeping down hordes of enemies. The version pictured is the standard one used by War, but his apocalyptic buddy Death has an even fancier version called the Harvester. That’s classic Death, isn’t it? Always trying to go one better.

Okay, so it’s not as impressive as some of the other blades on this list, on account of the fact it’s nothing more than an ordinary knife. It won’t come back to you if you throw it, and it can’t cut a moving car in half, but John Marston’s hunting knife from Red Dead Redemption is a celebration of versatility. There’s no animal it can’t skin, and it’s perfect for executing strangers. Plus, if you’re planning on becoming a master hunter, you’ll need it to fight a grizzly bear to the death, a feat so rugged it makes Daniel Craig’s Bond look like a sugar sculpture.

There’s something feeble about the name ‘great knife’ – it’s as underwhelming as ‘adequate husband’ or ‘games writer’ – but don’t be fooled. This thing is evil. The first time you encounter it is in the hands of Pyramid Head, who’s swinging it about like airline cutlery, and when you steal it later, there’s a genuine sense of role reversal. There’s nothing remotely heroic about you, as James, dragging this massive, rusty blade through the gloom of Silent Hill 2. When you think about it though, that’s fair: bravery is not a sexually frustrated probably-murderer armed with a six-foot boning knife.

It’s unusual to find a video game blade that’s actually sharp, and they don’t come much keener than Raiden’s High-Frequency Blade from Metal Gear Rising: Revengeance. It’s not enough that it’s a vicious, high-tech katana swung by a mechanised killing machine; it can also be used for deflecting bullets, which is incredible if somewhat flashy. It uses a powerful alternating current to weaken molecular bonds. What does that mean? It’s video game for ‘it’s great at cutting watermelons’. Cower in fear, delicious fruit, as the hour of your reckoning approaches.

Yes they’re a bit predictable, but the hidden blades in Assassin’s Creed are too beautiful not to include. They make all other video game stabbings seem routine and inelegant by comparison. The fact they’re designed for swaggering, look-at-me assassinations makes hiding them feel amusingly pointless; despite being a concealed weapon, they’re about as surprising as a magician pulling a dove from her sleeve. It’s as if they say, ‘Yes, I have just flamboyantly revealed myself as an assassin – what do you intend to do about it?’ Nothing, actually. Please don’t stab me again.

Uncurl that top lip, Dark Souls veteran, we know the Drake Sword is the ultimate noob weapon. It’s a comfort blanket, albeit an overpowered, scaly comfort blanket that you get from shooting at a dragon’s dangly bits. By the time you’ve reached Sen’s Fortress, you wouldn’t be seen dead using the Drake Sword to scratch someone else’s backside. But it’s exactly what you need to ease you through your first run of the Undead Burg – if it stops you rage quitting then it’s served its purpose. Just promise you’ll show some class and replace it with a Balder Side Sword as soon as you can, okay?

At least one of the weapons on this list had to be preposterous to the point of being useless, and what could have served that vital role better that this half-guitar, half-scythe abomination from Devil May Cry 3? In its guitar form the strings are made from electricity, and it fires bats when strummed – because of course it does. In its other form, a row of spiky protrusions flip out to become blades, essentially turning it into a giant scythe. This machine kills demons. Can you play Stairway To Heaven on it? Certainly not! It couldn’t be more painfully emo-2000s if it was on the front of an Evanescence album.

The mere fact it’s called the Vigoorian Flail warrants its entry on this list. What weapon could be better than one that sounds like a Norwegian black-metal band? Well, the four entries above this one, apparently, but that’s hardly the point. The Flail is a pair of kama chained together like nunchaku. They’re one of the few weapons in Ninja Gaiden without real-life inspiration, simply because they’d be too preposterously dangerous. Obviously not for Ryu Hayabusa, though – he laughs in the face of practical weapon design suggestions. The game’s Dragon Sword and Eclipse Scythe are worthy entries for runner-up.

We could have been wags and featured Sonya as one of our entries, but this is a serious business. And nothing says ‘serious’ quite like a pair of foot-long butterfly knives. Kano’s trademark choppers have evolved over time, but they have one constant feature: they look cool, in an inexplicable, ‘I want to touch them but I don’t know why’ sort of way. They’re at their best in Kano’s ‘Knife To Meet You’ Fatality from Mortal Kombat X, which is so hideously violent we’ll forgive the dreadful pun. And after we said this was a serious business, too...

There are so many blades in Soulcalibur worthy of this list – and Ivy’s preposterously awesome whip-blade-thing, Valentine, comes a close second – but the winner has to be Soul Edge. Just look at it! Part dead shark, part cleaver, part Resident Evil boss. Best of all, it changes shape depending on the preference of the user, which would be marvellously helpful if it didn’t also devour the user’s soul and drive them slowly insane – it’s powerful enough to completely corrupt the most noble of characters, as demonstrated by the fall of Siegfried. Soul Edge is also worthy of note for being the only blade here that’s a series antagonist as well as a weapon. You can’t say that about the Drake Sword, can you?

Like the High-Frequency Blade, the stabbers in Dead Rising stand out for being sharp, and the game does more than its share of making up, with limb-hacking abandon, for the gaming norm of dull-edged swords. The peak of its offerings is the elegantly simple Ceremonial Sword, which you find after defeating the leader of the bizarre (read: annoying) Raincoat Cult. It’s perfect for cutting the restless dead infesting the mall clean in half. More than anything, it’s a helpful reminder for when the End Time finally arrives: get to a weapon replica shop and tool up. Swords don’t need to be reloaded.

Some people would argue that this isn’t actually a bladed weapon, on account of the nitpicking distinction that it’s made from pure energy rather than shiny metal. To those people we would present this simple argument: shhhh. It cuts things, so it’s definitely a blade. There’s nothing quite so satisfying as the splashy noise that comes with picking up an energy sword in a desperate game of 2v2 (apart, perhaps, from a match-winning sword spree on Blackout).

It’s a weapon that typifies everything that’s great about Halo: it’s absolutely lethal in the right circumstances, yet is never overpowered. It also elicits happy memories of the sword-sniper glitch from Halo 2, which would let you leap magically across the map just by switching between the two weapons quickly enough. Simply put, the Covenant Energy Sword is Halo’s lightsaber: iconic, impressive and wonderfully evocative.