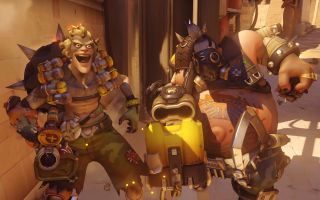 With only four modes spread 12 maps, no single-player campaign, and an unlock system that encourages microtransactions, many Overwatch players feel like they didn't get what they paid for. It seems to be the most commonly cited complaint among negative user reviews on Metacritic, it's been showing up on Blizzard's forum and Reddit for months, and Twitter has given voice to a number of criticisms as well (between all the Play of the Game parody videos):

I dont get some game reviewers are praising the hell out of overwatch but slated battlefront for lack of content 💩🙀 pic.twitter.com/9sEOykpgVtJune 4, 2016

The further from launch I get, the more of a waste of money Overwatch seems. There's not enough content. Period. Character depth be damned.June 4, 2016

To be fair, when it clicks, #Overwatch is fucking spectacular... Which is why I'm irritated that there's not enough of it.May 29, 2016

If I had more time to spend with Overwatch, I might be getting tired of its limited map and mode selection, too (I'd say I'm still in the "warm glow" part of the relationship, teetering on the edge of "peaceful contentment"). So I asked myself, with those valid concerns in mind, why am I not worried about where Overwatch will be in a month or even a year? Well, I know Competitive Mode is coming by the end of June. And if you look at how Blizzard has treated all the other games it released in the last decade, "poor post-release support" just doesn't seem like a valid concern.

Heroes of the Storm has added 15 playable characters to its lineup since it came out of beta a year ago. Hearthstone has gotten three big card expansions and three single-player "adventures" since it came out in 2014. The StarCraft 2 trilogy is done, but Blizzard is still releasing updates, running ranked multiplayer, and creating new mission packs like Nova Covert Ops. Diablo 3's massively unpopular loot system and equally loathed Auction Houses were patched out nearly two years after the game came out. Heck, World of Warcraft is still getting regular updates and paid expansions nearly a dozen years past its release date. Blizzard doesn't tend to leave its customers high and dry.

Yeah, a lot of that post-release stuff came in the form of paid DLC or expansions. And many of the complaints suggest that Overwatch would have been fine as a free-to-play game, given its current breadth. But here's the upshot of buying Overwatch for $60/£55 (or potentially $40/£30 on PC): you've already paid for most or all of the important stuff, because Blizzard plans to give out additional heroes and maps for free.

By selling Overwatch with a standard price tag, Blizzard can afford to spend time adding substantial elements like characters, maps, and modes to the game instead of focusing on trifles with a quicker turnaround. And players don't have to worry about the community becoming fractured between DLC map packs, or the in-match metagame of counterpicking heroes getting subverted by paid unlocks. Why not just release it all at once later on? This way we get to start playing now. You can always wait if you're unconvinced.

Of course, this hinges on the idea that Overwatch will soon be bulked up enough that far fewer players will feel like it's too insubstantial. But Blizzard has stood by its games and their players many times over, so like I said, I'm not particularly worried. And until then, I'm still having a great time pushing carts and spamming voice lines.