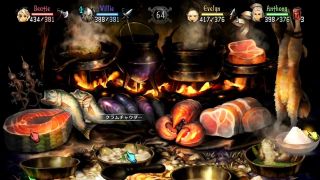 By my estimation, George Kamitani and his team of artists at Vanillaware are the undisputed champions of modern 2D graphics. Vanillaware's trademark visuals employ stylish, hand-drawn character sprites and richly detailed backdrops bursting with color to ensure that any screenshot looks as pretty as a painting. I'm jazzed for the Western release of Odin Sphere Leifthrasir, a 1080p, 60fps remaster of the already-gorgeous PS2 original (which I sadly never finished, to my great and soon-to-be-reconciled shame) that's coming to the PS3, PS4, and PS Vita next Tuesday. And falling in love with Vanillaware's visual style all over again has got me thinking about its previous production, Dragon's Crown. No, not for the ludicrous physical proportions of some of its characters - for its gratuitous depictions of food. One look at the delectable dishes in Dragon's Crown will spike your appetite quicker than those clips of glorified, sped-up cooking instructions that are always clogging up your Facebook feed.

Food only becomes a factor in Dragon's Crown when you've set up camp, triggering a minigame that acts as a health-restoring checkpoint between levels. The goal is simple: take stock of the fresh-looking ingredients you've apparently been hoarding in preparation for this culinary moment, cook them up using the frying pans and cast-iron pots at your disposal, then devour your adventurer's cuisine to replenish your life points or gain buffs for future encounters. Cleverly, the action is all contained in a single screen, whether you're playing alone or in a full dungeon-diving party of four, and the ingredients have ties to the types of monsters you've been slaying up all the while. You might whip up a dish using real-world components like Enoki mushrooms, seared hare, and onion rings, or take your courses in a more fantastical direction with deep-fried jumbo scorpion claws, sauteed slabs of minotaur tongue, and boiled slices of Kraken tentacle.

No matter what you decide to cook up, I can guarantee it's going to look delicious. Every savory cut of meat is marbled with little lines of tasty fat, juicy chunks of fish glisten with natural oils,  steam rises invitingly from rich sauces and bubbling soups, and the hearty portions are all garnished and plated perfectly regardless of the fact that they'll be devoured within seconds. Even something as plain as toast radiates delectability, looking like crunchy loaves of sourdough browned just enough by the open flames of a bonfire. And the journey is just as appetizing as the destination, as you develop all those essential flavor profiles by hitting your dish with some seasoning in the form of salt, spice, or a splash of wine.

Just writing about the campfire cookouts of Dragon's Crown is sending my taste buds into a frenzy. If these succulent feasts were as simple to cook up IRL as they are in-game, we'd all be eating like we live in three-star restaurants every night. The amount of effort Vanillaware put into this cooking minigame is more than some games put into their entire enemy roster: on top of the meticulously painted, subtly animated sprite for each dish, there are two additional sprites showing off the food in increasing states of consumption as you're chowing down. That kind of attention to visual detail is the heart and soul of all Vanillaware games and their graphical splendor. And I'm convinced that any virtual vittles in the future can never outdo the luscious dishes of Dragon's Crown.