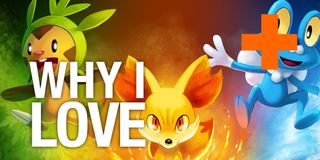 There’s something heartbreakingly sad about an abandoned game. Especially one that doesn’t deserve it. There you were, giving all that attention to it. It was flourishing, so pleased to be the sole object of your affections, if it could have purred it would have, and no, you left it. Alone in the dark. Trapped, in the solitary confinement of a handheld console with a dead battery or tossed aside on top of your PS4, just a naked disc lying there, forsaken.

You didn’t mean it, you say. Life happened, you shrug. Newer shiny toys, new Just Eat restaurants to order from, other games....

Oh God, this wasn’t meant to start so bleakly but I simply wanted to assuage some of my guilt. We’re all complicit in this. Game abandoners. Those who get three quarters of the way through a campaign and leave for something brighter and shinier. It’s the grim circle of gaming life. Think of used game shops as animal rescue shelters. They should be the subject of Facebook videos. Think of the cracked covers, the coffee ring stained box art, the despair. Give a game a cheeseburger and a home, eh?

But then - and here’s the uplifting part, I promise - there are the games we return to. The games we rediscover nestled away in the corner of a 3DS case or left carelessly on the shelf under the coffee table that no one ever looks at. I did this last month with Pokemon Y. Not only had I somehow spent 70 hours with my Pokemon, I’d abandoned the game just before I reached the Elite 4. I was on Victory Road. Wiiz (no, you shut up) was almost at the end of her journey and I put down my 3DS, replaced the cartridge with Animal Crossing more than a year before and, quite inexplicably, never went back.

Loading it up was a bizarre experience. There was my party, just as I left them. My Yveltal was waiting, Pikachu sitting at the front of the queue like I’d just gone away for my coffee and my guilty favourite Simipour eager to show off his brilliant Scald move again. I felt terrible. The buttons were alien. The team was all there but I felt like I had lost my power. And yet, they helped me get back into the swing of things. In  our first test battle with a passing trainer, Pikachu looked over his shoulder to check all was well and I suddenly remembered all the joyous time I’d poured into the affection stat.

If you haven’t seen it, the Pokemon-Amie section of Pokemons X and Y respectively is frankly adorable. There are mini games to play with your critters and then just a screen where you can feed them macarons and stroke their fuzzy little faces. This all influences affection and means Pokemon will work better for you in battle. I might have forgotten the macarons, but Pikachu hadn’t. *sob*

It was easy after that. We cruised through a few training battles before heading to the Pokemon Center to do some shopping. It was there that I discovered that past me might have been borderline insane. I had more than 75 potions, 50 super potions, 25 Paralyz Heals, 40 Max Revives, 20 Awakenings and more than 200 Oran Berries. I had every single Pokeball in double figures. Repels in droves. Slews of Ether. I was, put simply, clearly preparing for the Pokepocalypse. What did I think would happen? What on earth did I think was coming to need to repeatedly horde the berries from my much visited farm? If there was a Doomsday Preppers equivalent for Pokemon trainers, past me would have been on the National Geographic channel on a weekly basis.

This all meant that completing the game was painfully easy. We came, we saw, we conquered the Elite 4 but, despite the impossibility of failure due to my insane prep, it was a glorious victory. It was 14 months in the making and there was a distinct sense of achievement. It was also the first Pokemon game I’ve ever fully completed. Add in the poignant end message about working together, and of course I cried. The credits rolled and so did my tears. Go on. Replay a game you abandoned. And cry.