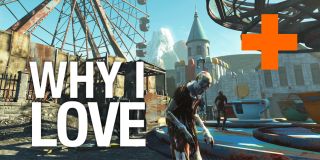 I'm convinced that the post-apocalyptic, soda-celebrating theme park Nuka-World is going to be the best part of Fallout 4. Not because it's the last hurrah of DLC for Bethesda's latest RPG, but because I've always had a fascination with the many varieties of video game theme parks that have sunken into a state of disrepair. There's something magical about experiencing dread and danger in what should be one of the happiest places on Earth. The themed zones and rides of amusements parks perfectly lend themselves to level variety, because they're essentially a giant procession of outlandish set pieces. Entering a freaky virtual fairground is a chance to explore these surreal spaces beyond the park goer's usual boundaries, glimpsing the guts and gears behind mascots' big smiles and attractions' bright colors. But it's also a realization of what roller coasters, haunted houses, and clowns all tap into: the instinctual thrill of fearing for your life in what's supposed to be a safe area.

You can find eerie amusement parks all over the real world, borne of abandonment that leads to nature reclaiming the undemolished remains of giant, expensive structures built in the hopes of lucrative profits and family fun. But the backstories behind gaming's many twisted theme parks get a lot more creative. The blame could be placed on global thermonuclear war and the bands of bloodthirsty raiders that followed, as is the case with Nuka-World. Perhaps it's the influence of a nightmarish dimension, a la Lakeside Amusement Park in Silent Hill 3 or Queen Christine's Dreamland in Diabolical Pitch. It could be a smack dab in the middle of a war zone, like Call of Duty's DLC maps including Carnival in Modern Warfare 2 and Splash in Black Ops 3. Maybe they've been commissioned by visionaries with warped worldviews, like the titular park in Illbleed, Psychonauts' Meat Circus, or Ryan Amusements in BioShock 2. Finally, there's my personal favorite - a purposely deadly hotbed of horrors and demonic clowns, as seen in Painkiller's Loony Park, The Curse of Monkey Island's finale at Big Whoop, or the trope's undisputed king: Midway's legendary light-gun shooter CarnEvil.

The best video game carnivals are a treasure trove of environmental storytelling, that bastion of memorable, evocative imagery that imparts the history of your surroundings. Part of the fun is trying to envision what the park was like before it devolved into a dilapidated hellscape; after all, every amusement park attraction (imaginary or not) is engineered to excite visitors and endear them to fantastical themes. That's what delights me about CarnEvil's Rickety Town, an absolutely bizarre mish-mash of unalike motifs that still fits perfectly in this macabre funfair. It starts with the Christmas-themed Slay Ride rollercoaster (populated by sickly elves), transitions to Big Bunyan Ride (a wooden ferris wheel operated by an enormous Paul Bunyan statue), then switches gears with a parade of Mr. Smiley mascots, a '50s-era gas jockey wearing a freakish grin, followed by a spinning teacups ride where diseased-looking Barney doppelgangers bursting out of giant dinosaur eggs. It's a disorienting whirlwind of disturbing terrors, but it's all glued together by an appreciation for the kind of hallucinatory sights and unnervingly happy vibe that characterizes any visit to an amusement park.

Another paragon of theme park level design comes from a rather unlikely source: the obscure, tropical expansion to Duke Nukem 3D entitled Duke Caribbean, which has you blasting aliens with Super Soaker sprays instead of shotgun rounds as you frolic across beaches beneath the hot sun. The standout stage (at least for me) is Mr. Splashy's Super Happy Fun Park, a spacious water park that's been overrun by invaders. To find the colored key cards that let you reach your end goal, you're forced to leap over the railings of water slides and river cave rides to explore regions that are normally off limits, poking around controls rooms or grabbing ammo tucked behind dioramas of pyramids that are completely flat from the back. The attention to spatial detail makes this water park and its fully nude, anthropomorphic frog mascot feel believable; you even get to experience the elation of zooming through queue areas built for long lines, complete with signs saying "1 hour wait from this point".

Fallout 4's Nuka-World looks like a fine addition to the pantheon of f'ed-up funfairs that litter the gaming world. It's already ticked off all the appropriate boxes: a range of zones with distinct, family-friendly themes, minecart- and rocket-themed roller coasters that lead to attacks by hostile animatronics, and rusty, decrepit automatons of park mascots Cappy and Bottle trudging around wearing cherubic smiles. The trick to building a great twisted theme park is remembering that, before disaster struck, it was just a regular theme park - with all the marvelous attractions and curious sights that entails.