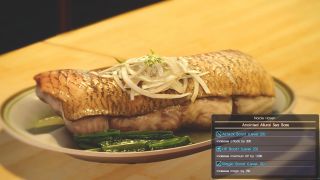 Food in video games isn’t a new idea. Accustomed to lugging around an inventory stuffed with apples and chicken legs, or chunks of whatever animal I’ve butchered, I’m always ready to hurriedly scarf down snacks in the middle of a battle like a dog at a buffet. However, in Final Fantasy 15, Square Enix approaches food somewhat differently. Rather than a button-mapped power-up for times of need, FF15’s food takes time and planning, just like a real meal. Resident chef Ignis clearly hails from the Heston Blumenthal school of cooking: no Jamie Oliver bish bash bosh will do here. These succulent dishes are to be savoured, not demolished in a single bite like a Greggs pasty.

Before each meal a lingering shot ensures you stop and appreciate the calorific glory of the food the Kingsguard are about to devour. Chunky breaded cutlet dipped in velvety tomato sauce with a side of seaweed. Crispy-skinned seabass topped with herbs and sautéed onions, served with fresh leafy greens. Rich chocolate cake resplendent with jewel-like berries and a sprig of mint. I’ve got a cupboard full of cereal and Super Noodles at home, so maybe this is some kind of vicarious eating.

Besides looking mouth-watering, each meal provides a variety of buffs and stat boosts as you might expect. However, like any good meal, each recipe is more than the sum of its ingredients. Obtained and consumed via a complex web of gameplay, story events and metanarrative, these tasty treats imbue mealtimes with greater significance than if they were purely a means of bumping HP and MP.

Via player-character Noctis, I’m the one who digs up the Leiden potatoes and emerges from underground caves with an inventory full of funguar, but it’s Ignis who takes inspiration from everything around him to create new recipes. Once this realisation sets in, eating at restaurants and diners becomes its own sidequest. Did we try this dish yet? Will this be the one that prompts Ignis to open his prissy little notebook and jot down ideas for his personal twist on Galdin Gratin? Expanding Ignis’ repertoire becomes the driving force behind my other in-game actions. Sometimes overhearing conversations about food or finding recipe books, or even just seeing someone else enjoying a meal is the thing that gets Ignis snapping his fingers and yelling: “That’s it!”

I become an obsessive foodie, eavesdropping on people by the noodle stand chatting about their favourite kind, lingering conspicuously by diners just trying to enjoy their meal in peace, consuming every item on the menu with gusto in the hope it’ll spark Ignis’ imagination. My pursuit of Noctis’ fishing skill stems not from the surprisingly addictive mini-game itself, but because I want the satisfaction of seeing that 200lb monster turned into a sumptuous meal for the team to eat. Not so sassy now you’re drizzled in oil, huh, Giant Trevally?!

Additional benefits can be gained from feeding characters their favourite dishes, but I’m more interested in what these preferences say about their personalities. Musclebound Gladio likes his food grilled or fried, preferably in chunks gnawed off a skewer. Ignis’ tastes are as varied as you’d expect from a culinary whizz, ranging from delicate chiffon cakes to hearty fisherman’s risotto. Young prince Noctis’ favourite dishes are suitably emo, steeped in nostalgia, evoking memories of the people and places he had to leave behind for this road-trip.

The result of this integration of game mechanic, mini-game, story and character development gives Noctis and the others a sense of depth, and casts their mealtimes as real events. It’s no coincidence that personalised side missions become available after sharing a meal together at camp. The group bond over food, and this is reflected repeatedly throughout the game not only in terms of quests’ availability but also through the chats the group have, reminiscing about meals past. In fact the driving force behind many of these sidequests is to collect rare foodstuffs and victuals.

When I go to a restaurant, I don’t look at the menu and plan how many calories I’ll need to get me through the following day. I look at what’s new to try, or what looks the most delicious, or incorporates my fave foods. Sometimes I look at what I can afford and weigh that against how worthwhile it seems. In FF15, I find myself doing the same. Which is not to say stat boosts are never a consideration. However, FF15’s food is a rarity in video games in that it provides more than just fuel, encouraging you to look beyond its primary function and feast on all the attendant pleasures it has to offer.

Dunno about you, but all that’s made me a bit peckish. Mmmm. Cereal.