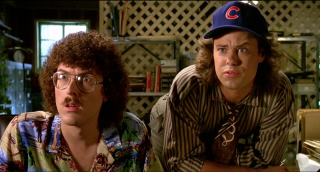 In a time of Netflix, Hulu, and watching the latest episodes of your favorite everything on pocket-sized computers, it’s easy to forget that once upon a time, television was a strictly analog experience. I wouldn’t ever want to go back to that dark time before the Internet and smartphones made everything better. But for UHF, the screwy 1989 movie penned by Weird Al Yankovic, I will always make an exception.

Everything about the movie is dated. The idea of an unemployable dreamer taking over a UHF TV station is unheard of in the digital age. (For you kids in the audience, ‘UHF’ stands for ultra high frequency, a set of radio signals that can be used to transmit television, usually on the higher-number channels. It was often used for public access, the stations where any average citizen could contribute shows. Primitive, I know.) The costumes scream ‘80s, and not in a good way. Even the jokes are old, such as the parody clip that turns Dire Straits’ Money for Nothing into an ode to the Beverly Hillbillies.

Despite all that, the movie remains a cult classic. And I think that even if I watched it today for the first time, it would still rank as one of my favorite comedies ever. That’s because no matter how dated the trappings of UHF are, it’s also a timeless story told with the utmost compassion for its cast of oddball characters.

The plot is simple enough: George Newman takes over a tiny television station owned by his uncle. A hefty gambling debt means the uncle plans to sell off the quirky station to a big bad media giant, so George and his comrades must raise the money to save the station and buy it themselves. That David vs Goliath battle is the framework for Weird Al Yankovic to hang snippets of his comedy genius on. There are some choice skewerings of TV advertising and giggle-inducing send-ups of Indiana Jones and Rambo. The humor pushes boundaries more than Weird Al’s song parodies do, and in that respect, the film’s age probably worked in its favor. The trailer for Gandhi II is, let’s say, irreverent. There’s an amazing sight gag involving a blind man and a Rubik’s cube that’s not exactly sensitive. And animal lovers might have a fit over Raul’s Wild Kingdom show.

You’d expect for a movie written by and starring Weird Al to be, well, weird. Yet his George is the least peculiar of the people who become part of Channel 62. In fact, the elevator pitches for the characters seem like fuel for politically incorrect disaster. An extremely unusual janitor hosting his own TV show? A little person working as the news reporter’s cameraman? A martial arts instructor who wears his gi at all times and speaks with an over-the-top Asian accent? Seriously, how did Yankovic not get thrown out of the studio exec’s office?

As uncomfortable as they sound on paper, though, these characters just work as the film plays. Each of them and all of the others working at Channel 62 are treated with care. They are the source of much humor without being the butt of the jokes. And that’s what ties together a movie that would otherwise be a scattered collection of Weird Al comedy bits. UHF has heart.

Stanley Spadowski, the janitor who becomes a TV sensation, best embodies that care for the people who are different. Assuming you could sell the premise of a mentally disabled janitor to a studio executive, it’s hard to imagine a contemporary portrayal of him not going into one extreme or the other: wildly insulting or cloyingly schlocky. But in UHF, the young pre-Seinfeld Michael Richards manages to turn Stanley into a wonderful savant. Looking at the studio audience for his show, even as he’s pulling giant boogers out of his nose or blasting children with a fire hose, all you see is adoration. There’s no trace of malice or irony in how the movie wants you to feel about Stanley, and that’s why it works.

Beneath all the unexpected gags and spoofs, respect ends up being UHF’s strongest message. The jerks at Channel 8 aren’t jerks for no reason. They belittle and demean and step on anyone different, anyone who doesn’t buy their greedy vision of success. Channel 62 does the opposite. The weirdos are welcomed, encouraged, given prime time slots, and allowed to do whatever their hearts desire. They are unashamed of enjoying what they do, of being who they are. And in the end, that mutual respect creates camaraderie that carries them to victory.

The tale of scrappy people working together to win against impossible odds is one we’ve heard in popular culture for decades, maybe centuries. It’s a tale that still manifests today, in Patreon campaigns and YouTube sensations and Tumblr communities. But there’s something in UHF’s telling of the story that makes it unique to that time. Just like at Channel 8, the typical signs of success for anybody in the 80s were about style over the substance. Cool was valued above all else, and it was measured by wealth, by superiority, by perfection. The years have mellowed ‘cool’ into a definition that embraces individuality and the ‘you do you’ mindset, but that’s not the standard the weirdos of Channel 62 were being held to. So even though the same plot could be retold for a modern audience, it wouldn’t be UHF anymore.

The good news is that the modern-day weirdos will probably still appreciate what this movie says, and how it’s said, even underneath those layers of late ‘80s baggage. UHF tells the story that every wannabe artist, every creative person who just wants to make cool things, has dreamed about happening to them. Those are the people who will see themselves in George Newman, Stanley Spadowsky, Kuni, Pamela Finklestein, Noodles MacIntosh, and the others. And they’re the ones who will fall in love with UHF, laughing their heads off the whole time.