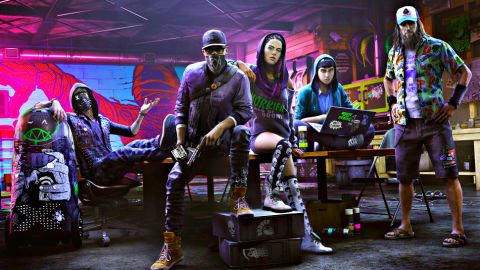 Watch Dogs 2 is a solid, satisfying sequel that successfully addresses the weaknesses of its predecessor.

San Francisco Bay sprawls before you, the sun blazing, the ocean glistening, the struts of the Golden Gate bridge stretching high into a summer sky puckered with wisps of clouds. This playground is rich in depth and detail, its world vivid and vibrant, offering sharp social commentary, myriad famous landmarks to explore, and a sizeable array of differing missions and quests. It's quite a spectacle, but the big question remains: is Watch Dogs 2 the slick, ultra-modern open-world adventure that the original should have been?

Chicago’s grey, gritty suburbia was the perfect backdrop for Watch Dog’s equally grey Aiden Pearce. While the 2014 open world shooter promised much, Pearce’s grimly robotic performance and unflinching lack of remorse sat at odds with its socially-aware story sewn to expose the perils of consenting to those user agreements most of us never read. While the world-building was meticulous, in the end Watch Dog’s innovative ideas were regrettably lost in a sea of its own banality.

From the off, this sequel sets to invert that. Sunny San Francisco is painstakingly recreated with an authenticity that will make those familiar with the city instantly familiar with this virtual version, too. But while your goal echoes that of Pearce’s (chiefly) one-man mission to wreak havoc on Them - the nameless, faceless suits exploiting public privacy in the name of security - in this sequel, you work on a more collaborative basis.

Marcus Holloway is an aggressively affable fella, which again feels like a deliberate decision to disentangle the Watch Dogs brand from dour-faced Pearce. Tagged for a crime he didn’t commit, Holloway utilises his hacker prowess to wipe clean his record, attracting the attention - and subsequent invitation - of underground hacktivists Dedsec.

And as he moves quickly from inductee to team stalwart, Holloway completes Dedsec’s eclectic cast. Modest about his accomplishments, uncomfortable in the face of compliments, despite his newbie status Holloway seems at one with his DedSec comrades. It’s his cheerful, easy demeanour that makes interacting with NPCs surprisingly rewarding, particularly with a wheel of tongue-in-cheek emotes to signpost the direction of your conversations… seriously, try ‘em.

The plot may feel familiar. Outraged by the misuse of customer data and privacy breaches, small vigilante hacker group, Dedsec (and yes, that should sound ring a bell if you played the original game), seeks to take back 'what’s ours' by infiltrating dot com conglomerates to reclaim data and/or reappropriate it for their own means. Each time you complete a story mission, the fruits of your labour - or the havoc you unleash - is neatly summarised in a pop-up news bulletin, bringing a grave and often timely reminder that all actions have consequences.

It’s not shy to take satirical shots, either. You’ll see glimpses of Scientology in a mission that takes on polished religious cult New Dawn, and recognise consumer concerns with online tech giant Nudle (yep, Google) and !NVITE (a less obvious alt-moniker for Facebook until you rock up to the headquarters and see the giant thumbs-up icon outside). And that’s just for starters.

Sprinkled throughout this - and chiefly delivered via snippets between Holloway and fellow Dedsec-er Wrench - is a smattering of pop culture dorkiness, including a reference to the untimely demise of Crocodile Hunter Steve Erwin (and a resulting mistrust of all stingrays). Though sometimes a little cheesy, these interactions deepen Holloway’s relatability and help us understand his motivations, particularly if you frequently check-in with your hacktivist colleagues between missions.

Talking of which: Watch Dog 2’s cast has been meaningfully and carefully selected. Not only does it feature a black lead, supporting characters too bring diversity, featuring trans and autistic characters that seemingly buck stereotypes. What’s more, as there are no narrative drivers for these characters, they are diverse for no reason other than to paint an authentic picture of SF’s real-life community.

That said, it’s not without it’s tropes, as one glance at the turtleneck-wearing, man-bun-toting Nemec, CEO of Dedsec nemesis Blume, will attest. The cookie-cutter guards are as disposable and unmemorable as you might expect, while your brief stint as a Nudle (read: Google) bus driver brings you into contact with a wave of nauseating yoga-pant-wearing millennials debating diet tips and slagging off sushi bars, prompting Marcus to complain about their “pretentiousness” under his breath.

Story missions are chiefly cut from the same mould. Usually you’ll breach compounds or buildings, hack computers and, usually, there are bad guys to take out (should you wish to) along the way. Failure is unforgiving - there are rarely checkpoints mid-mission, so one balls up is enough to prompt an agonising restart, even if you’re fleeing at the end. However, once you’ve built up your toolkit, even the most densely populated enclosures can be brought down without breaking a sweat.

How you tackle these missions is Watch Dogs 2’s unique identifier, its fingerprint. You can jump in all guns blazing, non-lethally incapacitating enemies with your stun gun, or creep around the peripheral alternating between aggression and stealth to take down an entire compound without ever setting foot inside. While Holloway can put down combatants permanently, most of your tools and gadgets are built to stun enemies, not murder them. Which is fair enough, really; what’s the point of rectifying a false criminal record if you’re mowing down people to do so?

Turning junction boxes into tasers, evoking faux gang wars, or making up false SFPD APBs - it’s all available to you. Each building comes with its own unique strengths and weaknesses. Not everything works every time, either, so there’s enough uncertainty to force you to strategise where you can, and go with the flow where you can’t. It feels very nicely balanced.

Your capacity to control electronic elements around you is fuelled by your Botnet charge, a buildable gauge that waxes and wanes depending upon your usage. As you may expect, some of your activities require more power than others, but I rarely found myself having to hang around while it recharged. In the scant few times I needed power and didn’t have enough, it’s easy to jack sauce from the civvies and baddies around you. Nethack - a perk that permits you to scout the world in shades of grey in search of handy exploits - also assists by tagging enemies and helping trace power cables back to their source. It’s tempting to play much of the game in these shades of grey, but resist where you can; some of the game’s most dazzling set-pieces are dressed in and around story missions.

Sometimes Holloway himself moves like a shopping cart, though. Shifting in and out of cover is spongy, lacking finesse, and the parkour elements are woefully under utilised. But where Marcus’ limitations occasionally hamper progress, it’s here your toys - the remote-controlled Jumper and, latterly, your Drone - really come into their own. Able to scout and hack from above, or sneak into vents from below, it brings much needed variety to the otherwise fun, but functional, story missions which is fantastic given the campaign is chunky, long, and satisfying.

The hacking mini-game will feel familiar if you’ve played the original, but instead of being presented on a static screen, this time around your locks and gears appear in and around the environment around you, reminding you of the real-world consequences of your hacktivism. Side missions are plentiful and varied, too, ranging from scouting the Bay area for super awesome selfie opportunities, to Uber-like driving assignments in Driver San Francisco (a former Ubisoft game, yes). The skill and ability tree is boosted by Research Points which can be gathered organically through the story mode, or found via bonus missions scattered across the world.

My gameplay was marred by several instances of slowdown, and I experienced two colossal crashes (one of which necessitated a full system reboot). These were, for me at least, isolated cases and not symptomatic of more serious woes. Generally, transitioning throughout the city and from mission to mission is smooth and painless.

And what about multiplayer? You’d expect a game that leans so heavily on teamwork to deliver meaningful collaborative missions, and regrettably, the game just falls short here. Does that mean it’s crap to play? No, not at all. But it does mean the meticulous teamwork built so convincingly in the single-player story is all but abandoned here.

You can jump in or out of multiplayer modes by opening the app on your in-game smart phone, or simply by heading to one of the purple icons sprinkled liberally across your map. There are three types of mission up for grabs; bounty hunter, hacking invasion, and co-op. The latter missions will feel familiar; they’re essentially shallower, less detailed single-player objectives that require you and a buddy to steal this, or blow up that. PvP mode hacking invasion (which you may remember from the original game) pits player against player in a race to hack the contents of your opponent’s phone, or prevent them hacking yours. It’s not always welcomed; occasionally you can be targeted whilst you’re in the middle of something else, so stopping to take out a PvP opponent can be frustrating (your availability can be amended via the options on your in-game phone, though).

Bounty Hunter is exactly as it sounds; either you, or someone else, is designated the Bad Guy, and it’s up to you and the SFPD to track them down. I’ve yet to test this, however, as despite clocking up a dozen or so hours in multiplayer, I haven’t been able to successfully connect to a mission.

Ubisoft calls Watch Dogs 2’s multiplayer seamless and to be fair, is it indeed that if you fancy a hacker invasion with a random player, or you’re already teamed up with someone and moving from mission to mission. Hooking up with a friend in the first place isn’t so straightforward right now, however; I experienced several erroneous error messages whilst trying to connect, and then a handful of server-side lost connections mid-mission, too.

While the co-op mode lacks variety, it is fun. As Marcus’ capacity to withstand gunshots and bodily harm is authentically limited, playing as a tag-team helps strengthen your approach, and we often defaulted to having one Marcus scout the area, stealthily setting traps and distracting guards, whilst the other crept in and silently took them out.

Is it a bit ridiculous that both players are playing as the same character? Yeah, it is. It would’ve been nice to have teamed up with Wrench or Josh, who’d perhaps have brought a different balance of skills and expertise to the game rather than have two copies of the same guy wearing slightly different clothes. It's a perfect metaphor for Watch Dog 2's mixture of the sublime and the ridiculous.

So how is it as a package, then? Watch Dogs 2 builds upon the strengths of the original game, whilst polishing up aspects that lacked depth to deliver a coherent, comprehensive experience. Its diverse cast and (mostly) thought-provoking narrative trump the occasionally repetitive, maddening gunplay, and though the urban youth humour occasionally falls flat, for the most part its characters feel, talk, and react convincingly. The lengthy story mission alone offers hour after hour of combat and exploration but, unlike the original, I'm left wanting more once it's all over… and this time, for all the right reasons.

Watch Dogs 2 is a solid, satisfying sequel that successfully addresses the weaknesses of its predecessor.