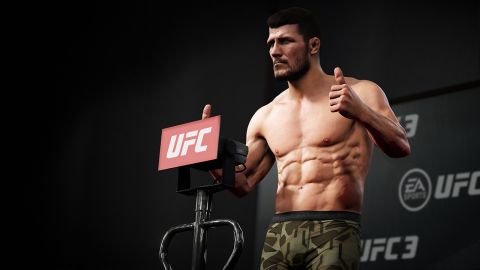 A game of two halves: one gripping, strategic and beautifully balanced, the other dull and grinding. Unfortunately, you have to be able to to deal with both.

One of the many reasons for the explosive rise of mixed martial arts is just how many levels it’s possible to enjoy it on. Sure, you might get into it because you like watching that funny Conor McGregor talk about how expensive his socks are and how he knocks people out in 13 seconds, but once the hooks (ah-ha!) are in, you swiftly realise there’s more to it than that - an ever-shifting array of styles, tactics and techniques that make it the most fascinating, fast-evolving sport in the world. Everything you learn makes it more fun to watch: it might take you a while to get from ‘Stand ‘em up, ref!’ to an understanding of the intricacies of Brazilian jiu-jitsu, but stick with it long enough and you’ll eventually be able to wax lyrical about the merits of Tony Ferguson’s rubber guard versus Khabib Nurmagamedov’s hand-trap-heavy ground-and-pound. And the *really* brilliant bit is, none of this technical know-how wrecks your enjoyment of the stupider stuff: yes, you might enjoy a Stephen Thompson striking masterclass like some people appreciate fine wine, but there’s nothing stopping you from getting high on the fruity pop of an all-out slobberknocker.

Have EA Canada managed to capture all that with UFC 3, the most Conor-McGregor-dappled edition ever? Short answer: aaaallllmost.

Let’s start, like all fights do, with the standup. This is what’s had the most radical overhaul, and a lot of it is excellent. First, there’s a fresh emphasis on realism: in UFC 2, spamming spinning and jumping kicks was one of the more regular routes to online success, leaving fundamentals like the jab under-used and ineffective. Here, kicks are slower and more easily countered - especially thrown without a setup - and the frame advantage from straight punches makes them crucial to smart fighting. Previous iterations’ damage indicators have been changed into three separate energy bars, each with different characteristics: head shots hurt but you regenerate from them quickly, body damage takes a while to mount up but is slower to recover, and your legs don’t recover from damage at all. It’s trickier to score an outright knockout than in previous games, but also vastly more fair: it’s based partly on visible stats (health, stamina), partly on invisible ones (the new ‘chin’ metric), and partly on which direction your opponent’s moving while your strike lands.

11 things I wish I knew before playing UFC 3

Duck forward into a front snap kick and you might be done in one, but throw 40 headshots at an opponent who’s blocking even half of them and you’ll gas out before he hits the canvas. It takes a lot of getting used to, but it’s a system that rewards smart gameplanning: do you go for the early knockout while you’re fresh, body-hook your way to tiring your opponent out, or try to chip away at him for the full five rounds and finish strong? The answer depends on who you’re fighting, as well as your own style. No more haymaker-fests.

As complex to learn as real fighting

Slightly more tricky, at least to start with, is the retooled input system. With footwork becoming ever more important in UFC fights - watch Cruz-Dillashaw for a classic of the dance-punch genre - the button-map’s been re-configured, with the right stick dedicated entirely to head movement and the L buttons handling hooks, high kicks and body shots. Uppercuts involve pressing two face-buttons and signature moves require even more finger-mangling combinations. You’d think pressing L2+X (on a PS4) and then L1+Square just to throw a basic jab-hook combo is insane, and you’d be sort of right - but you get used to it, and it’s also crucial to the best bit of the system: you can now duck, sway or throw basically any shot while you’re on the move, as well as using ‘signature’ lunges like Cruz’s ‘bump’ to change ranges at an instant. It’s mind-blistering at first, but expect to see high-level fights taking advantage of what’s a much more complex, refined system, with distance and Octagon control just as important as memorised combos. Will you be able to catch a lunging opponent with one perfectly-timed back-skipping left hook, a la Conor McGregor, and knock him out mere seconds into the fight? Not without a tonne of practice: but then, that’s sort of what professional fighting’s all about.

Where this all starts to crumple like it’s been booted in the liver is when things go to the ground. Here, things haven’t been reworked nearly as much, and the old system - basically, hold your stick on one direction, and hope that your opponent doesn’t block/do his own, faster move/hit you really hard before you can improve your position - looks absolutely archaic compared with the subtleties of the striking. It’s frustrating, because the team’s obviously spent hours carefully re-creating hundreds of transitions in gorgeous animated form, but it feels nothing like real grappling and actually worse - though easier - than THQ’s system. What would be better? If I was suggesting anything to the developers it’d be to expect the same level of intelligence out of grappling fans as you want from the strikers. Nobody - bozos aside - thinks they could walk into the Octagon and slap a triangle on somebody with zero practice, any more than they’d expect to get out of Demian Maia’s mount. Sure, make the takedown system simple and timing-based, but it’s fine if a newbie ends up floundering like a beached fish on the floor. That - as with the striking - is how fighting works.

Some grind in the modes

What else? Well, let’s ignore Stand And Bang (no grappling!), Submission Showdown (no striking!) and Knockout Mode (first to land six strikes wins!) - when you tear a huge chunk of gameplay out of your finely-balanced game it goes about as well as you’d expect: not at all. And we’ll dance deftly past Ultimate Team, which - by selling upgrade packs that include vastly improved strikes, as well as rare fighters - makes Battlefront 2’s loot-crate system look immensely charitable. The big seller here is GOAT mode, which sees you managing promotion and PR duty alongside training and gym-wrangling, all with the ultimate goal of becoming the best ever. It’s… well, weird. Yes, modern fight fans might know that managing the conflicting demands of press obligations and time in the gym are all part of the game, but does anyone care about that enough to make endlessly tapping between ‘Ab Wheel Crunches’, ‘Protein Shake’ or ‘Start A VideoGame Streaming Channel!’ on a series of menus any sort of fun?  And everyone knows that shameless self-promotion is how you get the big fights and the bigger bucks, but does occasionally choosing the Angry-Face social media option or getting fined pretend money for missing a press appearance really recreate the vibe of a real-life rivalry? Quite honestly, it’s a no, and then another no. Some of the in-cage training options are nice, especially the chance to unlock an upcoming opponent’s weaknesses (he can’t defend guillotine chokes!) by sparring with a partner similar to them. And the idea of ‘peaking’ for a fight by timing your training right’s a nice one. But that’s not enough to make the grind of clicking through classes named after random jiu-jitsu terms fun. Sorry.

Ultimately (ah-ha-ha!) here’s the thing: for all the trash-tweeting and angry interviews and staredown tomfoolery that surround it, mixed martial arts is about fighting, and if the fights weren’t any good, nobody would care. It’s the same with UFC 3, and the annoying truth is that UFC 3’s fights are half-brilliant, half going-through-the-motions. If you’re prepared to put the time into developing a solid sprawl-and-brawler for online play, or you can put up with the grappling mode (or, inexplicably, enjoy it), you’ll have a great time. If not, you’re probably better off playing with friends, putting Simple Submissions mode on, and making a gentlemen’s agreement to stand and bang. You can even do your own trash talking.

A game of two halves: one gripping, strategic and beautifully balanced, the other dull and grinding. Unfortunately, you have to be able to to deal with both.

Joel Snape enjoys Street Fighter V, any sandbox game that contains a satisfyingly clacky shotgun and worrying about the rise of accidentally-malevolent super-AI. He's also the founder-editor of livehard.co.uk, where he talks a lot about working out.
See comments