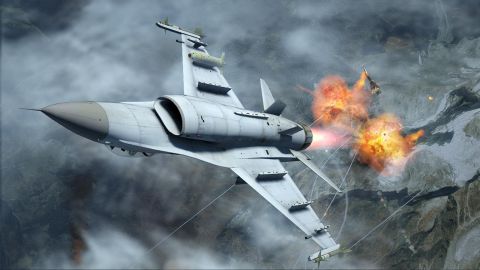 This is a flight simulator for people who can’t be bothered with the technicalities of flying a plane. The dials, switches and gauges on your dashboard are for show only – it’s an arcade game designed to get you into the action with as little fuss as possible. The story is classic Tom Clancy nonsense. Set in an indeterminate future, you control three pilots – a Russian, a Brit and an American – and have to defend a variety of accurately mapped cities and terrain from non-specific ‘insurgents’ of an indeterminate cause. It’s weirdly vague about who exactly you’re blowing up.

The first mission takes place in the skies above the Middle East. You’re performing a routine patrol of the area, when insurgents suddenly attack your base. It’s an exciting intro. Both sticks are used to roll, pitch and yaw your plane. The shoulder buttons are used to accelerate and fine-tune your direction, and your missiles and cannons are mapped to the face buttons. That’s really all there is to it; most of your aiming is handled by an automatic lock-on.

The challenge is keeping up with enemies, who are deceptively nimble. You have to regulate your speed to get behind them and attack. When enemies get a lock-on with their missiles (indicated by a flashing red light on the HUD), you can either perform tight turns to outrun their heat-seekers, or drop diverting flares by clicking in the right stick. Flares are limited. You also have to learn how to land and even fuel your plane in mid-air, which is incredibly tense and, somehow, more exciting than the actual combat. The maps look decent, especially the Russian Caucasus Mountains, but generally it’s muddy and unremarkable looking. And the slow-paced tutorial above foggy Aberdeenshire will have you reaching for the power switch.

HAWX 2 is a perfectly solid arcade shooter, but the low production values, laughable storyline and simplicity of the combat make it a somewhat disappointing bore.