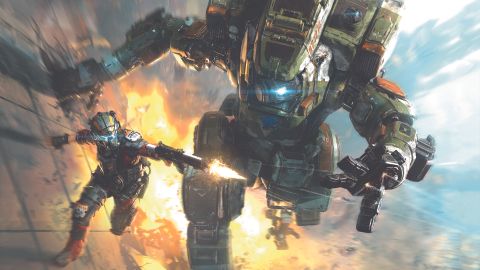 There is cover in Titanfall 2’s campaign, but you won’t use it, except during brief, gloriously fluid slides behind crates and fences in order to swiftly reload and recover, before throwing yourself furiously back into the fray without stopping. There are grenades in Titanfall 2, but you won’t lob them sheepishly from afar as a cheap way of thinning out the crowd before moving in. You’ll hurl them and give immediate chase to multiply the pressure, or drop them directly at the feet of the enemy (having already shotgunned three goons from the centre of the pack), before leaping ten feet into the air, bouncing off a wall, and spinning back around to rain down bullets on any staggered survivors.

There are corridors and arenas in Titanfall 2, but their walls do not represent boundaries. They represent possibilities, as much the fuel of your freedom of movement as the empty space around you. What appears a tightly-packed chokepoint is not an attritional stand-off, but a chance to wall-run brazenly past the opposition, peppering them with death from above. What looks like a cramped corner to hunker down in and defend is, in truth, simply an omnidirectional launchpad from which to nigh-instantly transport yourself to anywhere in the medium-range vicinity (or long-range, if you’re good enough), to attack, regroup, manipulate and reshape the fight, making your next move (or two, or three) without even touching the ground.

Titanfall 2’s level design often has the grammar of more traditional FPS, but the language used to travel between each piece of punctuation is entirely new. Its campaign is built of familiar, concrete forms, but the total, creative freedom afforded by its free-running, double-jumping traversal systems reshapes everything you know about firing angles, terrain, cover, attack, and defence. This isn’t simply an FPS highlighted with isolated sections of Mirror’s Edge-style platforming, as it could have been. This is a game in which the entire fabric of everything you do, in combat, in navigation, in environmental puzzling, and in the many seamless, hybrid sections that blend two or all of the above, is powered entirely by the unprecedented, truly three-dimensional movement Titanfall 2 affords you. And you will always be moving.

And it’s not by accident that I mention such conceptual variety just there, but very deliberately, because Titanfall 2 is a game pathologically set on showcasing its core designs in as many different shapes and contexts as possible. I’m going to be very careful not to spoil anything here, because there is so much to spoil, but although relatively brief – around six or seven hours on normal difficulty – Titanfall 2’s campaign doesn’t waste a minute.

You’ll be alone, but Titanfall 2’s sheer, unbridled possibilities will make you an immense force, capable of doing the jobs of ten warriors simultaneously, once the campaign’s incisive sense of escalation has (quickly) made you comfortable with your true capabilities. Because a room is five times bigger when every wall is a floor.

Sorry, I said in that last paragraph that you’ll be alone. Of course you won’t. Because you’ll have a Titan. It’s testament to the quality and inventive presentation of Titanfall 2’s on-foot play that the campaign would still be a landmark experience without BT-7274, but with him, it’s one of the most complete and finely crafted single-player action experiences of the year.

Your Titan will be a permanent presence, wingman, and buddy, as well as your primary means of travelling the campaign’s world(s). But he’s only intermittently playable in combat, your time cut between on-foot battles and mech vs. mech play, as the two of you work together to explore and solve the problems around you, two differently sized and equipped partners sharing a common goal. Titanfall 2 does a great job of changing up pace and environment in order to justify your going it alone and joining back up, but its handling of BT impresses beyond the purely structural.

Narratively, the campaign’s careful rhythm of splitting and regrouping the team builds a surprising emotional closeness between the two of you, accelerated no end by the constant response choices that shape and personalise dialogue that in many other shooters would be arbitrary and throwaway. With player character Jack the witty quipper, and BT the deadpan straight-man, there’s a progressively affecting feeling that the two of you are halves of the same whole, a growing sense of closeness mirrored, re-confirmed, and amplified every time you come back together to bring out the big guns.

And when you do, dear Lord, Titanfall 2 becomes exhilarating in a whole new way. Perfectly contrasting and complementing the lightning-fast, intricate, human vs. human combat with deliberate, heavy, but no-less strategic bombast, its mech fights are a joy. With a progressive suite of Titan load-outs to choose from, each with specific tactical uses and considerations, Titan battles are as methodical as they are spectacular. Mixing priorities as you cathartically squash and explode the ground troops who were once such a threat – Jack is swift and eminently capable, but his direct opponents match with pure manoeuvrability and aggression – while also duelling with multiple enemy Titans at the same time, this is far from the lumpy, big dumb robot smash-up it could have been.

This isn’t just an unexpectedly great FPS campaign. It’s a genuinely special one. The kind that doesn’t come along very often, but shakes up perceptions of the genre the instant it appears. Frankly, it’s ridiculous that we get this in the same year as Doom. But get it we do. And change things it really does.

Oh hang on, I forgot something. Multiplayer. You know, that multiplayer that literally was good enough to carry the entire first game. It might only be half of the package now, but it’s even bigger and better this time around.

The overall framework hasn’t changed much – not that it needed to. This is still very much the same fast, frenetic, deceptively thoughtful haven of smooth, lightning-fast, wall-running map traversal and spectacular, vertically focused combat. But, much like in the campaign, Titanfall 2 seeds in a bounty of additions that tweak and deepen the core action in a multitude of eclectic, highly customisable ways.

The new, unlockable Pilot abilities are chief among these, an expanded part of your character’s load-out which open up the scope to retune Titanfall 2’s combat in a vast number of different directions. If you want to amp up the kinetic, aerial game, then equip the grappling hook and use your barrelling acrobatic momentum to become a gun-slinging Spider-Man, launching from wall-run, to double-jump, to swing, to yet another soaring leap. Or snag your opponents and zip in for a quick melee execution.

Want a more direct approach, for the efficient infiltration of enemy bases? The returning invisibility cloak (literally) has you covered. Or maybe you’d prefer the tactical aggression of the pulse blade, a sonar-emitting throwing knife that you can launch at any area you’re about to hit for a quick opposition read-out before you get there? Or you might opt to focus your build on defending objectives once you’ve captured them, planting an A-Wall shield to power up all shots you fire through it. Or for cheekily scooting in and out of high-risk areas – say, between several warring Titans blocking an objective – you have the choice of speed-boosting Stim shots. Or perhaps you’d prefer to be able to get out of trouble quickly by teleporting back to a previous position? Or…

Look, there’s loads of this stuff. And every single option changes the way you’ll play Titanfall in a fundamental, but entirely well-balanced, way. It’s a system that develops the game in terms of both breadth and depth, but entirely organically, and with completely instinctive ease of use.

Similarly, the use of Titans has evolved, with personal mech-friends now available in all of the campaign’s strategically diverse flavours. What this leads to in practice is a much more nuanced, robot-vs.-robot game, where individual strengths and weaknesses make a huge difference to match-ups, demanding an almost fighting-game-style appraisal of risks and advantages when engaging an enemy player.

Titanfall 2 might well be this year’s best surprise. The original game’s gorgeously tactile, flowing traversal systems always had great potential as the fuel of a single-player campaign, but the care and craft that Respawn has instilled into creating that adventure will blindside you. It’s immediately gratifying on a moment-to-moment basis, but as a complete work and experience, it’s one of the most creative and rewarding FPS in recent memory.