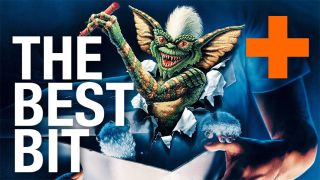 During a special screening of the original preview version of Gremlins at the Brooklyn Academy of Music last summer, director Joe Dante explained why his madcap Christmastime horror comedy could never be made today. It’s not just that Hollywood, especially Warner Bros. who released Gremlins in the first place, is petrified of the financial risk inherent in backing weirdo original pictures. The reason is that Gremlins and films of its era were made explicitly to be seen in a theater full of people, their reactions to jokes and bizarre sights building with centrifugal force as the sounds of laughter and the movie swirled through the air. Today movies are made to both pummel the audience in the theater - the shared experience as exhausting sensory blitz - or be viewed on a phone. Gremlins, said Dante, couldn’t be made today in part because its best scene, the viciously dark Christmas tragedy story, wouldn’t work. It simply wouldn’t be as completely hilarious as it is without all the people in the room laughing with you.

Of course, Warner Bros. didn’t want it in the movie even back then. Dante, still just a young director with no clout, was adamant that the scene stay and it made the final cut purely because producer Steven Spielberg supported Dante’s choice. According to the director, though, Spielberg was just backing up a fellow director; he didn’t get the appeal of the scene either. Watching it in isolation, you can see why both the studio and the famed Indiana Jones director were troubled. Right when Gremlins is reaching a fever pitch of creepy critter action, the movie stops dead in its tracks so Phoebe Cates can tell a story about why she hates Christmas so much.

Make no mistake: it is grim. The story she tells is black as midnight, delivered with utter conviction and sincerity by Cates, and Dante lingers on the scene for a long time before turning back to the evil Stripe and his Gremlin posse getting up to no good. There’s some foreshadowing to this moment before it rears its ugly head, but there’s nothing to indicate that her aversion to the holiday was so terrible. In short: not only did her father die on Christmas, he died by breaking his neck coming down the chimney dressed as Santa Claus and they didn’t find him until his body started decomposing days later. Even Gizmo, remarkable little puppet that he is, is giving her a look that says, “Damn. I mean. Woof. That’s rough.”

Here’s the thing, though: it’s funny. Gut-bustingly, brutally, aggressively funny. I’d always found it funny on my own; everything about the way it’s framed hints that despite the tone it’s not intended to be taken seriously. The fact that it cuts away to Gizmo at all is hilarious. He’s a ball of fuzz that can’t get wet or go in sunlight, the Earth’s most abundant resources. Who the hell cares what the fuzzball is doing? But there’s also the reactions from everyman Zack Galligan, who’s surrounded by an enormous festive silhouette reading, “Christmas!” It’s patently farcical and utterly human at the same time, playing the scene as absurdist but also satirizing the thick, saccharine pap that typifies most Christmas movies. Bad things happen at Christmas too; bad things are happening just outside the bank where Cates and Galligan are hiding. When Christmas sucks for you, no matter the cause, it sucks hard.

It’s hard to describe precisely how well this scene plays in a packed theater. It comes almost immediately after the movie’s most memorable effects blitzes, when Cates is serving dozens of gremlins at the bar across the street. Dante is almost manic in his depiction of gremlins indulging in as many vices as possible: gremlins drinking, smoking, flashing in a long trench coat when they have nothing to flash, gunning each other down, rocking ski masks and attempting old fashioned ‘80s muggings, breakdancing, gambling. Name something your parents told you not to do, and the gremlins are doing it in the bar. When it finally ends, the crowd in the theater is dizzy with ascending laughs, and then Dante gives them just enough time to breathe as Cates and Galligan escape and look for somewhere to hide. Then he hits them with the Worst Christmas Story Ever Told. And he knocks them down all over again.

Gremlins’ best bit isn’t really a replicable comedy move. By the time Warner Bros. convinced Dante to make Gremlins 2: The New Batch, itself a massive parody of Hollywood’s lust for sequels, Cates’ story became just another target for derision. At one point she starts solemnly relating why she can’t bear President’s Day, and Galligan just starts hurrying her out of the room. If the long-rumored Gremlins remake happens, this is hardly a moment the studio will think is brand-essential. In the original, though, it’s the moment that defines Dante’s achievement, a crowd-delighting comedy that can do sly, subtle, and subversive humor just as well as big, dumb slapstick.