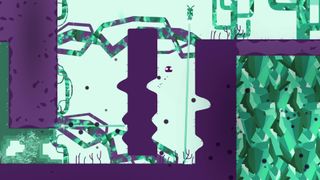 Semblance is a game that requires a shift in thinking. Boiled down to its most basic ingredients, you could simply label it a 2D platformer. But where other platformers challenge you to time your movement with the level, it's the inverse in Semblance; in this world, you can change the terrain to suit your needs, shaping yourself and the environment around you to solve puzzles and reach your goal.

It's an almost poetic parallel with the game's own real-world development.

Created by Nyamakop, an independent studio based in South Africa, Semblance began as a small-scale game with more traditional designs. "Originally this was a prototype by Cukia 'Sugar' Kimani, during our final year of university," Semblance designer Ben Myres explained to GamesRadar+. "I came on board to do levels. Back then, and for about a year of its existence, the entire game was just about the character changing shape.

"You could get flat, tall, or square in your normal shape. This was fun, but we struggled to figure out where it could go. During this experimentation, we wanted the whole world to feel soft - to make sense for this pliable character to exist in." Myres said the world featured both 'hard' and 'soft' platforms. Squish, the playable character, would change shape when it dashed into a hard surface, while soft surfaces would dent slightly before popping back into shape. Before long, Myres had what he describes as a a nagging, "stupid" idea: what if he and Kimani put a hard platform underneath a soft one?

As Squish dashed into the soft platform, it was dented downward, briefly revealing the hard platform underneath. But, unexpected to Myres or Kimani, a glitch had also moved the point of collision detection. Quickly, Squish dashed again, hitting the hard platform underneath and changing Squish's shape. "This extremely simple little glitch, and experiment, blew our minds," Myres said. "We said to ourselves, 'What if the platforms could deform more than just this little amount?'" Kimani began to prototype different ways to deform the game's terrain while Myres started designing levels around varying types of interaction.

"You have to understand, before we discovered - and I mean, discovered, we didn’t understand how this mechanic worked, or what its potential could be - and for a while afterwards, this game was just supposed to be a free or maybe $3 game on itch.io," Myres continued. "It was supposed to be a start for our studio, maybe get a little attention, maybe just be a nice portfolio piece for us to get jobs. That was the plan."

Had Kimani and Myres kept their heads down and focused on making what they had originally planned, perhaps that's where Semblance would have ended up: another student-made platformer destined to languish in a digital portfolio. But just like how players of Semblance will need to challenge the way they think about platformers, the duo at Niyamakop challenged themselves to embrace glitches and bugs - and in the process, made something new and exciting.

Now they just had to go from thinking up a neat idea to completely refitting their game to this new concept. No biggie.

"We saw the vision of deforming terrain, but we spent most of the rest of development figuring out how to actually make it happen. Much of this was technical, but a lot of it was graphic design and game design," Myres said.

It was a daunting list of unanticipated challenges, and anxiety set in. But Myres said he'd already internalized so many similar stories where quirks became features that he knew Semblance was on the right path. It was following in the footsteps of all-time greats like Tribes' "skiing" glitch, Quake's rocket jump, Space Invaders' increasing speed, and Street Fighter 2's combos.

"Previous game creators kind of did the mental pathmaking for this approach, so we had a way to follow them down. We didn’t just come up with this process ourselves. It’s just when a certain glitch arrived, we already could think 'Hey, maybe there’s something fun here,' because other people had shown it was sometimes worth following your own mistakes down the rabbit hole."

Other inspirations were more overt. Myres said the 2014 game The Floor is Jelly was a fast favorite, it also being a 2D platformer featuring a world that emphasized squishiness. Aesthetically, Myres cited games like Hohokum, World of Goo, Thomas Was Alone, and even the Cartoon Network animated series Samurai Jack. These sources of inspiration would set the tone of the world, but the team wisely decided to merge commercial inspiration with art direction as well.

Myres said the team scoured Steam, analyzing screenshots of the digital storefront's plethora of games. To stand out from the crowd, Niyamakop made pink, purple, and other neon hues dominant. It works: even without looking at it in motion, Semblance stands apart, despite its extensive list of influences.

"I love the quote 'To steal ideas from one person is plagiarism; to steal from many is research' by Reverend Charles Caleb Colton in 1820," Myres proclaimed. "Cloning is obviously the former - but when you shamelessly steal from many sources, you create something new. So in terms of our minimalism, we borrowed a lot from other sources."

With the game finally starting to take shape into something cohesive, it was time to put it in players' hands.

In retrospect, looking on as convention attendees played through a demo for Semblance was more... painful than anticipated. The expression on his face as he watched a player fail to solve one of his puzzles speaks volumes, and soon Myres ended up circulating through game dev Twitter feeds:

At first it might seem like Myres is cringing at the player. But he said any sense of frustration is directed inward, not out. "My mom used to hate playing games, because the games made her feel like she was stupid," he said. "I explained to her that my perception was, if you don’t understand something, that’s actually the designer’s fault, not the player’s."

In the moment captured on camera, Myres said he was feeling responsible for not more clearly communicating what the player needed to do, and was running through possible solutions he could implement in the next build. It was a difficult lesson, but a necessary one.

"Watching people play your game is really hard, but it’s so important," said Myres. "The Vlambeer folks say something like 'You need people to play your game and tell you what your game is. You don’t know what it is, because you’re making it.' This is so true! Through playtesting, you discover how your game works, and what's interesting about it, and what maybe doesn’t work. We discovered so many little interactions from watching people play Semblance. So I love and loathe going to shows and watching so many people play our game. It’s painful, as the face indicates, but you also learn so much from watching them."

To aspiring developers who want to follow in Semblance's squishy footsteps, Myres has some words of advice of his own. Among them is the importance of framing. It's not always enough to make a great game, you have to know how to sell the idea to audiences. That can be anything from a striking color palette to a provocative tagline (like calling Semblance "the first true platformer," a label Myres freely admits is "probably not true").

But mostly, he hopes other developers and would-be developers feel encouraged to nurture their ideas. "It’s okay to start with something boring and unoriginal if you’re seeking something more original as you go on," Myres said. "Plenty of games start out vanilla, and turn out more interesting. Don’t wait until you have an original idea - it’s more important to start and finish things than wait for that 'masterpiece' idea. Often those ideas come in the making, not in a bathtub eureka moment."

Semblance launched on PC and Nintendo Switch on July 24. On Steam, it currently has a 100% positive rating. "We’re releasing Semblance worldwide, in seven languages, and becoming the first African developed IP to ever launch on a Nintendo platform. All from one little glitch," Myres mused.

"This glitch and our willingness to find fun in it has literally changed our lives. We travelled to 25 cities over five continents in the past 18 months, game-jammed on a train trip across America, and spent two months in the Swedish woods with game developers all over the world, all because we said 'Hey, this is a bug, a glitch... but what if?'"

For more tales of indie innovation and iteration, check out our interview with Sean Murray about the shaky past, exciting present, and bright future of No Man’s Sky.