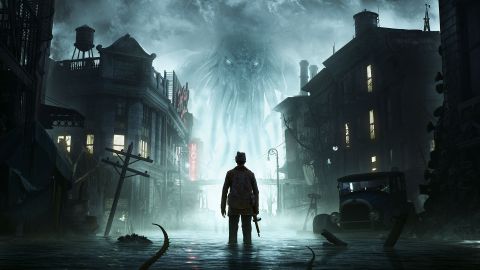 You awake, your boat caught in the jaws of an eldritch god - hysterical chants from cracks in the ocean floor have wormed their way into the minds of the residents of The Sinking City - and it's your job to investigate the source.

Frogwares’ love letter to Lovecraft starts as such - introducing the player to this bleak post-flood world, where the streets are lined with coral and viscera; mutant Cthulhu cats and fish-faced Innsmouthers share the decrepit alleys between canals.

As introductions go, The Sinking City starts strong. You’ll soon find yourself on a beguiling whistle-stop tour of Lovecraft’s tall tales, investigating damned caves for lost expeditions and dealing with genealogy obsessed tyrants. Rather than obtuse map markers you often have to seek out street corners yourself, placing pins and connecting the dots to unravel a wider mystery.

The visual style of the game is undeniable - from the mystifying unexplored seabed right back to the intricate environment assets on dry land. One that stuck out was a Gramophone that used a conch-shell as a speaker, perfectly complementing the septic hospital setting. There’s plenty of tiny detail to be noticed - a dank bar where Innsmouthers can drink alongside newcomers has walls lined with fish netting, and there’s a shotgun parked just by the owner’s feet. Just in case, you know...

Its most potent when you’re travelling through murky canals in your rickety rowboat, passing beached, gnawed sea life and crumbling architecture, tentacles poking out of the water in a sinister fashion. It’s a Depression-era chaser for the shot that will be Kojima’s Death Stranding later in the year.

The sea-soaked meat of The Sinking City is investigative work. As Charles Reed, you make dialogue choices and assess evidence to resolve narrative arcs. Sometimes the lead might run playfully dry and you’ll have to dip into side quests to chase (or stumble in most cases) onto some conclusive answers.

When you’re perusing crime scenes you’ll often run into Wylebeasts and other unnerving foes - stare too long at them or nurture your mind’s eye and you’ll induce The Sinking City’s insanity effects. Linger indulgently and the walls will turn to static as your vision warps, and half-opacity overlaid clips of enemies lurch towards you in claustrophobic chaos. It’s not quite Eternal Darkness, but it does the trick - though I found one of the more common visual frights of Charles hanging limp from a noose fairly gratuitous…

The boorish beasts come to the fore in the game’s infested areas which are designed for you to find extra crafting materials and bullets. After dealing with small fries in the early game I eventually opened a door to one of the game’s more substantial eldritch horrors - I screamed aloud in my living room at two in the afternoon. The way they’re animated is deeply unsettling, and the fleshy designs really bore their way into your head. It’s such a shame then that they’re such a bore to kill.

Once you get over the jitters, you’ll soon realise combat in The Sinking City is lifeless. Guns feel like pea shooters and trying to land a decent shot can be unbearable. Some enemies move far too quick for you to ever get a read on them - others hurl devastating viscera hairballs at you from any angle. I eventually resigned myself to abusing the geometry - lamping their heads through a wall as their limbs contorted and flailed - I can see you judging me, but if they can use the same logic to ragdoll me then I think it’s fair game!

You can stumble onto different conclusions for each investigation, and there’s a very satisfying feeling to piecing together factoids in your mind palace - which can result in serious narrative consequences. Tricky dialogue choices and reactive conclusions ensure you’re always questioning your quest givers - even if their faces are too rigid for any visual tells.

The ability to approach cases in multiple ways was interesting - but I still left feeling that there was a lot less nuance to The Sinking City than most games of its ilk. Detective work in The Sinking City is as easy as 1,2,3. No, seriously - you just arrange three reconstructed phantom vignettes into a scenario and Reed will recount his conclusion. I would have liked a lot more variation, especially when there’s such a rich premise backing it - and the fact that the game refuses to hold your hand.

Before and after reconstruction, The Sinking City’s gameplay loop is packed with lots of lonely walking and monotonous frustration as your mind attempts to decipher the increasingly vague clues. Is this one of those that you need to triangulate at an archive or the kind where you run around smashing A until you miraculously find the evidence asset? You’ll soon see the forest for the rotting trees when you’re wandering around a housing estate running into doors to see which one is interactive.

Sometimes, the game will vignette the corners of the screen to tell you that you need to use your supernatural mind’s eye to acquire more information - essentially leaning into the void to see phantoms and clues. The problem is that the visual prompt is so unbelievably subtle sometimes that you’ll most likely miss it.

Rather than doing any actual sleuthing, you’re then often left rushing around houses looking for prompts and staring vacantly as signs swirl and puzzles resolve themselves. In some cases, evidence may not be available in a location until a specific NPC tells you about it. I wondered how a detective game could be so detached from the joy of discovery - at times I felt the easiest option was to make best guesses rather than figure out the whole story or explore - concrete boots for a game of this genre.

As a character, Charles Reed is one dimensional - his anhedonic emotional range quickly becomes tiresome. Whilst he might whip out the odd quip on occasion, they’re so aloof and off-piste that you almost want to swaddle him and ask him if he’s doing ok. The lacklustre facial animations condemn the rest of the cast to rigid delivery too - whether they’re manic or devastated, their stoic faces remain glib.

This is unfortunate due to the often well-written exchanges had between characters. The Sinking City seeks to illuminate and air out some of Lovecraft’s own racism within the stories of his it reflects - mostly through narratives that touch upon xenophobia and eugenics with the Innsmouthers and the Throgmortons. The game must be applauded for choosing not to sidestep the inherent prejudices woven into its source material, but I still felt the overall emotion was stunted by poor animation.

Charles’ tortured backstory was also unravelled through some well-made cutscenes as he fought the grip of hysteria - and I really did like it when the game broke away from the open world and introduced some linearity. The introductory had the pacing right, and there’s also room for fascinating excursions to the ocean floor, melancholic dives to the elder heartlands, harpoon at the ready.

As well as the creepy crawlies you face off against, there are plenty of bugs to contend with in The Sinking City, from performance problems to gameplay. I would have enjoyed the surprise of finding a pentagram on the roof of a decrepit hotel room - if only I couldn't see every jarring pixel. There’s also a general lack of consistency in textures - whilst Charles’ leather gloves glisten gorgeously in the rain, I'm also inspecting a muddy skull and can see every vertex.

There are more general bugs too - NPCs often repeat the same lines in tandem, their rudimentary animations driving home the budget feel - as does the disappearing body when they perish. The NPCs often work against making the world feel alive! There are tons of them but unless they’re story relevant they feel like Disneyland animatronics - walking aimlessly and spitting out similar phrases. When you do see them engaging in a co-operative animation, it’s usually not working properly.

Yet, the game does embrace realism in spots - in a game with little platforming or verticality, there’s fall damage for some maddening reason. Due to the fact you’ll often find yourself clipping through assets and clambering onto impossible ledges, you’re no doubt going to fall frustratingly foul of it.

Unfortunately, there’s a gigantic gulf in quality between the gameplay and the world of The Sinking City. I loved soaking in its characters and atmospheric environments - it gave me the same surreal feeling as getting lost in one of Lovecraft’s short stories. Yet actually playing the game is a completely different affair. Thanks to a number of counterintuitive systems that often undermine each other, I felt like I was drowning in ambience without any good means to engage with it.

Reviewed on Xbox One.