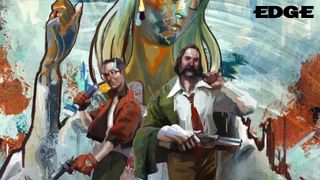 ZA/UM. As a studio name, it's awfully bold and affected. A little awkward and intractable, too; it doesn't look right when not in all-caps. But for co-founder Robert Kurvitz, "It just looks hella cool, that slash there. It looks like the technical name of something that definitely exists and weighs eight tonnes." And then there's its Russian meaning, which is 'from the mind' or 'for the mind'. "Just calling something that, it looks cultural. Like it's not laughable."

Then again, it did come out of a drunken Tallinn evening in 2005. "We were just hanging around in total squalor and poverty," says Kurvitz, who was the singer in a rock band called Ultramelanhool at the time. "We realised we needed to do something about it, and we put on DJ Tiesto's remix of Adagio For Strings, because it's a really epic and stupid banger." The idea of making a video game wasn't remotely on their minds; they simply wanted to open a creative outlet and make their voices heard, and so formed a collective of artists and writers who, over the following decade or so, created music, paintings and books, got into scraps with other collectives, and played Dungeons & Dragons.

"I think I met Robert when I was 17 or something," art director Aleksander Rostov says. "Before that, you'd hear these whispers going around about some crazy dudes who were doing this weird obsessive D&D thing that wasn't about dwarves and elves but motor carriages and people wearing top hats. It was like steampunk, but not vanilla steampunk, it was inspired by the French Revolution. When I got the materials, the photos of the characters and the maps, in person, it was like, 'Oh, shit, this is the stuff'."

Kurvitz, meanwhile, had met a novelist called Kaur Kender. "Once we got Kaur on board, everything really started flowing because Kaur has this superpower that's very important in capitalism. He understands money," says Kurvitz. "He's also a really good writer, and those seldom happen together." Kender helped Kurvitz self-publish a 2013 novel set in the world he'd been building called Sacred And Terrible Air. It took him five years to write and featured art by Rostov, but it failed miserably. "It sold 1,000 copies," says Kurvitz. "So after that I succumbed to deep alcoholism."

Three years earlier, Kurvitz had helped Kender out of his own alcoholism, and, anxious to help his friend in turn, Kender went to Kurvitz with a proposal. "My kids were telling me, 'Stop writing books! No one reads books! You should get into video games,'" says Kender, so he suggested, why didn't they make a game set in this world Kurvitz had been creating?

"I had never dreamt of making a video game before, because I couldn't get one piece of it into something that small and concentrated," says Kurvitz. "But then I suddenly saw the ghetto part of Revachol from up on high, and I realised that it would be perfect for an isometric game." Kurvitz told Kender he needed to discuss the idea with Rostov. "I remember going to the door to let him in," Rostov says. "He looked me dead in the eye and said, 'My friend, we failed at so many things. Let us also fail at making a video game.'"

"I wasn't going to do a video game," says Kurvitz. "I was thinking that we'd failed in enough things and I was just going to keep drinking." But Rostov jumped at the idea, so Kurvitz wrote a one-page synopsis which encapsulates what Disco Elysium has become in the four years since: "AD&D meets '70s cop-show, in an original 'fantastic realist' setting, with swords, guns and motor-cars. Realised as an isometric CRPG – a modern advancement on the legendary Planescape: Torment and Baldur's Gate. Massive, reactive story. Exploring a vast, poverty-stricken ghetto. Deep, strategic combat."

"So clear was the vision that I had zero doubts," Kender says. Still, it was a huge deal for ZA/UM to make a video game. "The idea that you can make a video game in Tallinn is completely ridiculous," Rostov says. "We have to rub the idea of it into each other's dreams or something, to convince ourselves that it's something that can be done."

"And especially a roleplaying game, because the RPG is like the crown jewel, the most complicated thing to make," Kurvitz says. "Everyone says you can't QA it. An open-world RPG, are you insane? It just felt like it's completely beyond any of our abilities, beyond anything we could do financially, even intellectually." Tallinn, after all, had just one other studio at the time, a mobile developer, so there was very little experienced local talent. But they did have access to some money: Kender sold his Ferrari. "It was a very sad and pathetic Ferrari," he says.

"The cheapest," Kurvitz says. "It used to belong to Dolph Lundgren."

"He bought it because he was imagining how he'd drive it to Cannes, but they never gave him a prize, so he sold it," Kender says. "And we used it to make a video game." More investment came from various contacts and friends, who have proved patient ever since, since they were initially sold on a game that spanned a huge world before the sheer detail of the game they found themselves making caused ZA/UM to squeeze and focus in on one small coastal town location. At this point the game was called No Truce With the Furies and it was announced with a late 2017 release date. But then the game overspilled that single location and into the capital, at which point it was renamed Disco Elysium and delayed into 2019. "We've had to move goalposts tens of times," Kender admits.

Back during the first year, however, the team had to find its visual style, to figure out the way it'd tell its story, and generally figure out how to be a development studio. The fundamentals of its art were based on Rostov's work for Kurvitz's novel, but in the early months Kurvitz would go to Rostov's place to write as Rostov painted looking over each other's shoulders. One breakthrough painting depicted a giant motorway running above dilapidated Eastern European buildings in Revachol, the world's capital city. "It's basically America straddling poor old Eastern Europe, a motorway with no ramp, shooting off into the horizon," says Kurvitz. "Once we got its rose-silvery sky, we knew we had Revachol's feeling."

"It was such a nice, experimental, explorative time," says Rostov. "I prided myself on my knowledge of video game history and how games have developed visually, and now I was in the position to be able to tap into these ideas and come up with a neat visual aesthetic in an actual game." The dialogue system was a greater challenge, and where the studio's inexperience and Kurvitz's ambition collided. He wanted the act of playing Disco Elysium to feel like reacting naturally to the world, and its skill system, which reflects many different facets of your character's psyche, from your intellect to your addiction centres, is designed to do just that. The game constantly rolls checks against them to determine how they react, and they speak and interact with you, the player, as if they're secondary characters.

And the dialogue itself also had to feel natural. "We wanted it so you don't notice that you're reading. This is the most important part of how to make books fun. Reading is only enjoyable when you forget that you're reading, because reading is not fun. No one wants to fucking read." Kurvitz wanted to avoid the typical way RPGs feed words to their players in chunks of expository lines. "How to get it into a fast, ticking form for a brain that's been fed on Twitter and Tumblr? It was hellish to understand the logic structures that have to go into a talking skills system and how they interweave and how it looks from the inside."

Then it had to be made into a system that ten writers can use. Currently, ZA/UM comprises 35 in-house developers, so writers comprise nearly a third of its overall headcount – before its 20-odd contractors, anyway. Kurvitz describes Disco Elysium as "the hardest writing job on the planet right now" because of its quickfire dialogue, its density of alternative through-lines and perspectives, not to mention the fact it's a detective game, so there also has to be total logical consistency. But from Disco Elysium's early demos, ZA/UM appears to have nailed it.

For most of the past four years, it has worked out of a squat in an ex-gallery in Tallinn's old town, because it was large, cheap, and next door to where the producer lived. "The first job interview we did was in the attic, literally beside a pile of pigeon shit," says Rostov. But over this year Kender and Kurvitz, along with many of the writers, have emigrated. In 2016, ZA/UM managed to secure a first round of venture capital financing, which enabled Kurvitz to secure a soundtrack from the band British Sea Power, and in visiting them in Birmingham he realised the UK felt like home, and also a good source of the developers and talent they'd need to complete the game. "Things just rolled from there; we have Mikee W Goodman from [progressive metal band] SikTh doing VO for us. If you're in Eastern Europe, you're dying for VO. The accents are horrible! You can't make a normal western voice, so you're trapped."

And yet ZA/UM is a product of Estonia. Disco Elysium's crumbling city and compromised characters don't depict Estonia's history, but they reflect it. "Our generation is very much formed by the collapse of the Soviet Union, of the '90s Tallinn and Estonia, which was a gruesome time," says Rostov. "It was gave rise to the music that we grew up listening to, with serious lyrics and conceptual heft. Estonia isn't that place any more. Now it's loser-ville. We made Skype, we became e-residents of the e-capital of the world. The sweet stuff is already gone."

That kind of bitterness and anger, ZA/UM hopes, will travel outside Estonia's border now that Kurvitz lives in Brighton, while Kender runs its London office ("You know, the Barbican Centre is like a pocket of the Soviet Union"). And Kurvitz hopes that its wider themes will also resonate with a wider generation. "The main character is, I guess, an overbloated avatar who's gone wrong for a long time, but he's in pain because he's still resisting. This fight and need to have strength to go on, we've noticed that this isn't only Eastern European." ZA/UM is good at fighting, from its founding in disaffection to its gumption to make a game as ambitious as Disco Elysium. "This creative outlet for us was incredibly difficult to achieve, and every day I'm making fucking sure I'm putting every piece of anger and pain into it."

Subscribe to Edge Magazine for only $9 for three digital issues and show your support for long-form game journalism.

Alex is a former editor of Edge magazine, and author of the Minecraft Blockopedia.
See comments