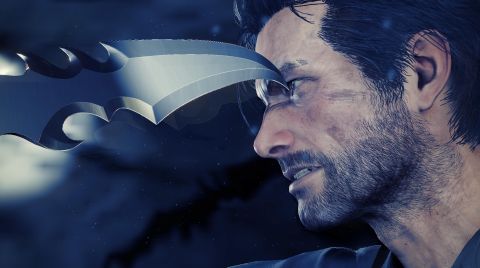 Though it doesn't outdo its predecessor, The Evil Within 2 delivers another fun, challenging, tense horror headtrip that should delight fans of the first game.

Sebastian Castellanos seems to mildly resent starring in this survival horror sequel. "Who comes up with these ridiculous names?" he grumbles after learning of a technological device with a title and function I instantly forgot. "That doesn't make any sense!" he bluntly fires back as former ally Juli Kidman lays down some dense exposition. The Evil Within 2 doesn't take the rich, psychologically disturbing premise and gorgeously grungy aesthetic of the first game to their full potential; if anything, it regresses in a few unfortunate ways. But despite the rough edges, this third-person thriller is still strangely enjoyable, much like the company of this curmudgeonly Castellanos.

Three years after surviving Ruvik's twisted mindscape within Beacon Mental Hospital, Sebastian has been kicked off the force and seeks solace in the sauce. After barely mentioning her in the first game, the former detective is now wrought with guilt over the death of his daughter Lily; we know this because the opening scene graphically shows the flesh melting off her five-year-old face. Suddenly, his former partner-turned-double agent Juli Kidman appears with news: Lily didn't die in that house fire after all, and Sebastian must rescue her by delving back into the shared consciousness of the STEM system, better thought of as The Spooky Matrix. You've no choice but the brave the undead dangers of Union, a virtual small town that's twisting in on itself like a blood-soaked version of the neighborhood from Psychonaut's Milkman Conspiracy.

It quickly becomes apparent that trying to rationalize anyone's motivations or the logistics of some impossibly convenient plot devices is going to be tricky at best. All you really need to know is that Sebastian is back and ready to kill any and all freaky monsters and murderous egomaniacs to save his daughter. But he looks and sounds a bit... off. Both Castellanos and Kidman have new voice actors; say what you will about the original performances, but I'm personally miffed whenever a universe's central characters experience a change in speak. That said, the line delivery is still solid, and often charmingly goofy. I always crack up at how nonplussed Sebastian is by the absolutely horrific things he's regularly exposed to, grunting out a world-weary "Shit." as enemies close in, or plainly responding to a living nightmare with "That was weird."

Something of a graphical identity crisis

The character models seem to have taken on a vaguely rubbery look, struggling to emote in ways that make the dialogue hit home. In fact, the graphics make an odd departure from the first game across the board. Somehow, despite the fact that this sequel wasn't made with PS3 and Xbox 360 versions in mind, the visual presentation has taken a stylistic step backwards. Where the original game made great use of grimy textures and dark visual filters to give the world an air of rust, intestinal slime, and decay, The Evil Within 2 feels like it's trying to make every little thing pop. The result is a visual style that feels oddly vibrant given the overall vibe, like a Fallout 4 spin on Resident Evil. You can spot soon-to-be-reanimated zombies from a mile away by how much they contrast with the environment, as if this is an old episode of Scooby-Doo where you can clearly pinpoint what can and can't move at any given moment. It's by no means an ugly game, excluding the purposely hideous enemies who look great despite a lack of variety. But compared to The Evil Within's lavishly gory intersection of serrated metal and soft organs, the lack of a distinct, cohesive look for the sequel is a bit disappointing.

When the presentation shines, though, it really gets under your skin in all the right ways. There will be times when you're absolutely dreading the notion of having to take a single step further down a dark hallway. Highlights include a sadistic photographer who was evidently inspired by the interior design of P.T., and glitching, reality-phasing areas that make you fearful to turn around and see what fresh hell might be standing there, a la Layers of Fear. The finely tuned audio is also full of insidious little noises that'll make the hairs on your neck prickle right up, or coax you into a false sense of security with vaguely foreboding classical music. Usually, an atmosphere of crushing suspense or fleeting moments of pure creepiness are far more effective and exhilarating than the payoff, which is too often a telegraphed jumpscare - but that could be said about plenty of horror entertainment.

Shooting and sneaking both have their place

If you played the first game, you know what to expect from The Evil Within 2's gameplay: a mix of ammo-conserving stealth takedowns that can eventually give way to some shoot-'em-up action once you've amassed enough upgrades and munitions. Some enemies are tougher or faster than others, but none are particularly smarter, so you rarely have to adjust your tactics. And I hope you don't mind having to occasionally line up perfect stealth kill sequences or die trying - because early on, one misstep can easily result in your being spotted, swarmed, and slain in a matter of seconds. This sequel completely ditches the original's match mechanic, where unburned corpses could potentially revive at any time - and surprisingly, I found myself missing those troublesome matches a wee bit. Yes, it was highly annoying whenever you ran out - but it also created some truly terrifying moments of panicked cremation and a looming distrust of the dead bodies you left in your wake.

Once you've collected and come to grips with a few firearms, you'll quickly find that you don't really need to conserve your resources all that much, at least on the Survival (read: Normal) difficulty. If you so choose - which I absolutely do - to play Sebastian as a loose cannon zombie killer who doesn't afraid of anything, you can safely go guns-blazing as long as you take the time to snatch up the myriad crafting items. You'll find them littered all around the larger, quasi-open-world districts of Union, which benefit from expanded exploration in exchange for the occasional bit of boring backtracking.

I couldn't tell you exactly how many jars of raw gunpowder Sebastian turned into ammunition using his bare hands - but it was a lot. And with the amount of boxes I destroyed in search of spare weapon parts, you'd think this sequel's subtitle would be The Great Crate-Breaking Caper. As with the first game, crafting is largely uninteresting: the only 'mechanic' to remember is that crafting on the fly uses up more resources than doing so at a designated workbench. In other words, never craft on the fly. Poking around Sebastian's skill tree and unlocking upgrades with green vital fluids offers a nice element of customized progression, though the stealth enhancements seem essential to your long-term survival.

The Evil Within 2 doesn't quite manage to step out of the first game's shadow - but while it may not have the same bold, unified style, you won't have to worry about frustrating mechanics or enraging difficulty spikes. If you've got a soft spot for the original game in your survival horror-loving heart, you'll surely enjoy this sequel (and get a kick out of the many callbacks to the previous plotline). After my 16-hour-long journey alongside Sebastian, I find myself looking back fondly on The Evil Within 2, with its satisfying mix of tense scares, hard-hitting combat, and impressive hallucinatory set pieces. And above all, I'll never forget that time Sebastian unironically told a photograph "I'm going to stab the shit out of you."

Though it doesn't outdo its predecessor, The Evil Within 2 delivers another fun, challenging, tense horror headtrip that should delight fans of the first game.