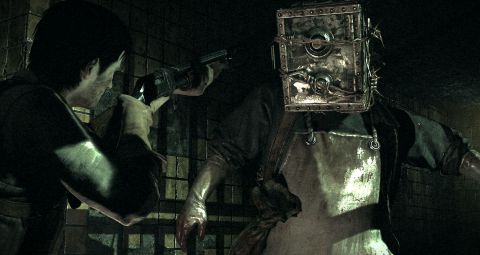 Climbing into a metal storage room lined with moist, gleaming viscera, I spot one of the undead Haunted horde, chowing down on some unlucky sucker. I quietly sneak up behind it, but it hears me somehow and turns around to attack… just in time for a giant tentacle to slide out of an overhead pipe, grab it, and disappear. Uh, all right then. But it isn't long until I'm facing that belligerent squid monster myself, while viciously outgunned and with no idea why I'm fighting it, because that's how this game works. A head-first dive into an awe-inspiring, grotesque world, The Evil Within misses the mark on gameplay and story, but still comes at horror in a unique way that's worth experiencing.

A callback to the old-school, Resident Evil gameplay of yore (by the Resi 4 man himself, Shinji Mikami), The Evil Within stars Sebastian Castellanos, a detective dragged into a horrific nightmare world by a psychotic phantom. While he scrambles to understand how exactly he got strung up in a butcher shop specializing in human meat, the world around him immediately jumps to attention. On the surface, the graphics create a photorealistic setting that looks like you could reach through the TV and touch it. The slaughter-filled environments promptly use those graphics to render things you definitely don't want to reach out and grab, like bloody saws and monsters whose heads are embedded with barbed wire.

Gore is the name of the game here, where sacrifices tied up in bags give way to monsters that rip off their own heads. While such grotesque imagery isn't inherently frightening--when you've seen one spurting blood fountain, you've seen 'em all--it immediately sets the tone of the world and doesn't let up through Sebastian's entire journey. You never forget what a dangerous, awful place you're trapped in, and you could even call it beautiful… in that deranged way people do before they start laughing maniacally.

When boots hit the unsettlingly stained pavement and Sebastian encounters the Haunted (the zombie-like monsters you'll spend most of the game killing), he in theory has a wide array of options for how to eliminate them. Sadly, they don't work so well in practice. For instance, it's possible to stealth kill most unaware enemies by taking them out from behind, but many are hyper-aware and your methods of distracting them ineffective. You can throw a bottle (or fire an arrow if you like to live dangerously and waste ammo) to direct their attention elsewhere. However, they rarely stay occupied long, and will often turn around for no apparent reason and spot you like hide-and-seek world champions. That certainly makes landing a blade in the back of a Haunted head feel like a triumph, but limits stealth from being used effectively in all but a couple of sequences specifically designed to take advantage of it. Traps (either environmental ones already in place, or those that you set yourself using the Agony Crossbow) are an option as well, and they have great staying power against two or three enemies. But if you're dealing with a crowd, as you often will, the traps become less and less effective, and any Haunted that aren't standing directly on the trap have a nasty habit of surviving them.

That leaves straight-up combat, which the level layouts favors in many cases, designing events where enemies are already alert and after your blood. This is easily the most frustrating way to take out the Haunted, as ammo is deliberately scarce and each enemy can absorb a lot more than you can afford to lose (and you'd better hope you have some matches on hand to melt their corpses if you don't want them to get up for round two). Melee is technically an option, but it often ends up being suicidal, since for every two hits you land, the Haunted will land one that drains a massive amount of health.

Look out for funny homages

Underneath all the blood, The Evil Within has quite a few clever references and homages if you know where to look. Watch out for winks toward popular horror movies, Brain Energy vending machines reminiscent of Monster (which dispense green upgrade gel, but don't get greedy), and another popular Bethesda game that features masks and stabbing.

Designed to appeal to hardcore horror game fans, this system is great for those who want a challenge, but less so for players who haven't perfected their precision headshot game (or just can't hit the side of a barn door under pressure). There are also a few quirks that add an extra level of irritation to the mix, like the fact that matches don't always work (I once dropped three on a downed enemy, none of which caught before he stood up and promptly killed me) and Sebastian can't shoot while crouching, which will likely test the nerves of even seasoned players.

All that carnage is worth pushing through for the story, since it does get some good momentum. However, it ultimately fizzles out in a disappointing way. From the start, the premise is intriguing: where the heck are you, how did you get here, and what does 'the specter' have to do with it? The first six or so chapters are sadly plot-barren with none of the encounters linking to the greater narrative, which leaves many of them feeling unrewarding. Things pick up about midway through though, with one sequence in a creepy mansion blending combat, puzzle-solving, and revelations about the antagonist so perfectly it would take the will of 1000 men to put the controller down. An extra layer of mystery is added by journal entries from Sebastian's past sprinkled throughout the game, which create interesting parallels between his life and the life of the antagonist. Figuring out their connection feels like it should the story's big shock--it's "Would You Kindly" moment, if you're a BioShock fan. Unfortunately, this plot is dropped at the last minute and replaced with something far less interesting. This is The Evil Within's biggest disappointment, born of a lack of follow-through that could have made it great.

Despite these issues, The Evil Within manages to leave it's mark by charting a new branch of survival horror and approaching it in a very interesting way. While the genre makes liberal use of gore and helplessness, few have looked at the concept of physically altering a person's consciousness by messing with their brain. That's completely horrifying, if you think about it (with your… what's that called? Think-meat). While this theme isn't immediately obvious in the early filler-fuelled chapters, it starts to emerge about the same time the main plot does, and develops into the sort of uncomfortably fascinating idea that great survival horror games are made of. If only the game pushed this theme a little further: the concept of being physically manipulated into doing something never hits you where it hurts. This ends with the concept feeling a bit like window-dressing, which is a darn shame because it's such a good idea. Still, even if the effort was clumsy, credit is due for bringing the concept out where everyone can see it. And maybe it'll develop in The Evil Within 2? Perhaps. If that's ever a thing.

When all is said and done (or maybe gored and hung), The Evil Within stumbles in a few too many places to be Mikami's magnum opus. It artificially forces players into punishing combat scenarios more times than can be ignored, and plots and themes with great promise end up sputtering out in disheartening fashion. Still, it would be wrong to dismiss all the things it does right. Between a gorefest that's thoroughly engrossing, amazing feelings of triumph created by the imposing difficulty, and a plot that gets to the core of some very unsettling themes, The Evil Within brings enough to the table that it deserves a taste. Just don't ask where this dish came from. You don't want to know.