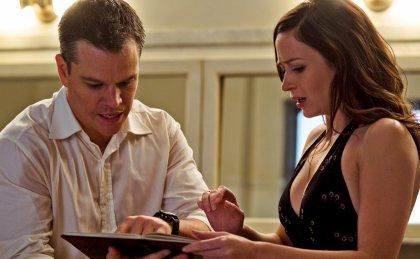 Love has taken a battering lately.

Blue Valentine, Rabbit Hole and The Kids Are All Right have all shown it busting up, breaking down and dying hard. Love’s had it tough. Love’s had Twilight, for pity’s sake.

But things weren’t always like this. One of the greatest romantic fantasies in cinema history, Michael Powell and Emeric Pressburger’s A Matter Of Life And Death (1946), was illuminated by an idea so simple and so beautiful that it makes your heart beat harder just to say it: that a single tear shed for love might stop heaven in its tracks.

More than 60 years later, and The Adjustment Bureau swings for something just as special. That a kiss can change the course of your fate. And that true love will find a way. On a marginally less profound level, it also proves that even if he was an angel, Terence stamp would still scare the bejesus out of you.

It all starts with an accidental meet-cute in a men’s room, as hotshot US senate candidate David Norris (Matt Damon) runs into a beguiling ballet dancer named Elise (Emily Blunt). One surprise kiss – and she’s gone forever.

As employees of “The Chairman”, these unseen agents of fate keep mankind on “The Plan” by constantly nudging us in the right direction.

At this point, The Adjustment Bureau sets off on a two-pronged trajectory as both desperate love story and chin-strokey sci-fi thriller.

Pursued and roadblocked by Mad Men’s John Slattery and his cohorts – and helped by Anthony Mackie – Norris chases the woman he loves but was never supposed to meet through the streets of New York City.

With oscar-winning cinematographer John Toll brushing the mood between light and dark (the shifting weather seems to track Norris’ storming emotions and the uncertain heavenly shifts), Damon probably has as much running to do here as he did in any of the Bourne movies.

“We actually tried free will before,” rumbles Terence Stamp, the Bureau’s dark destroyer brought in to prevent Norris from disrupting destiny. “You gave us the Dark ages for five centuries.”

From theological metaphors to pre-determinist minefields, we’re on seriously tricky ground here. Nolfi asks some difficult, adult questions about life and choices. Between being a President or a husband. Between changing the world or settling down.

And for sure, The Adjustment Bureau is chock full of holes.

Why doesn’t Elise ever phone the well-known Norris after the Bureau prevents him calling her? Aren’t the Bureau causing infinitely more “ripples” than Norris as they charge around trying to stop him? What exactly are the Bureau’s powers?

One minute they have amazing telekinetic gifts (knocking out phone lines, lifting paving slabs) and can predict the future (thanks to magic books that map our interweaving fates). The next minute they can’t even stop a taxi and must sprint after Damon like mortal men. In fact, the whole movie is set in motion when one of them nods off on a park bench.

But if The Adjustment Bureau often feels like a long, talky episode of The X-Files with some fair-to-middling action scenes tacked on, it’s the believable romance between Damon and Blunt that keeps us watching.

It helps that the leads don’t look like airbrushed superstars. They’re just two ordinary people who’ve both felt that rarest of sounds: click. When Elise playfully flips Norris the bird at the end of their second chance meeting, you get why he’ll never stop running till he catches her.

Blunt is funny and anarchic, Damon is determined and disarming. The chemistry is perfect and Nolfi, who previously wrote screenplays for Ocean’s Twelve and The Bourne Ultimatum, gives them some lovely, pure, romantic dialogue (“If I’m not supposed to be with her, why do I feel like this?” asks Norris, angry and hurt).

If only his direction swelled with the same passion – first time in the chair, Nolfi plays safe, tiptoeing a fine line between efficient and bland. Your heart may flutter, but your pulse won’t race.

Truth be told, it’s hard to say who’ll turn up to The Adjustment Bureau when it reaches cinemas.