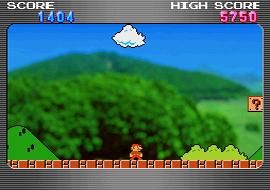 Say hello to the most furious game of Tetris you've ever played. Push is a two-player, online-enabled, tug-of-war match that keeps your teeth clenched and your toes tight. You and the other player stack blocks in the center of the same area (it's the green horizontal line near the top of this screen), feeding off each other's layout. By clearing two or more lines at a time, you push the stack closer to one of the the flaming red lines of death that form the top and bottom borders of the playfield. When it looks like you're about to burn, you can still pull off a full-blown, four-line tetris and shoot the stack back in the other guy's face. It's a constant back-and-forth mess that makes Tetris DS worth buying all by itself.

On the other end of the stress-spectrum is Puzzle mode. You sit and stare at one set of blocks that only needs a few pieces to clear completely. But which blocks, and in what order? Puzzle mode lets you take your sweet time, but in the end it's more trial-and-error than anything else - you can keep blindly throwing blocks until something works. Good to see the graphics from the 15 year-old NES game Yoshi's Cookie getting work, though.