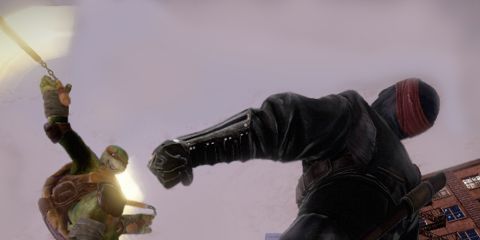 If we’re being honest, there are more mediocre TMNT video games than there were puns about shell shock in the first draft of this review. Considering the sheer quantity of of low-rent Teenage Mutant Ninja Turtles games out there, it’s a wonder that this beat-‘em-up franchise has had such remarkable longevity. The unerringly middling efforts are particularly odd because the concept here seems plain--and was largely nailed with the original arcade cabinets decades ago. Out of the Shadows, sadly, only flirts with these past triumphs. Heavy flirting, maybe, but it’s too badly built of a game to live up to its strong potential.

Most designers, and rightly so, use combat and brotherly interaction as the driving force in this franchise. On paper or in a design document someplace, developer Red Fly really got it right this time. Essentially a system weapon strikes, kicks, and a block button that can be used for counter attacks, it isn’t unlike Rocksteady’s brilliantly constructed Arkham Asylum/ City melee with a twist. In solo play, all four turtles are present, so after landing a string of attacks against an enemy, you can hit the d-pad to immediately take control of a different brother that’s knee deep in a Foot Clan throw down.

But everything lacks the fluidity to make it truly sing. Attacks chain together slowly and with little mobility, so you’re often sitting in the same spot hitting nothing when it feels as though your techniques should be aggressively pounding the swarm of enemies around you. There’s no tempo from fighting one enemy to the next. Worse, none of these separate battle mechanics blend together like they should. Weapons and kicks lumber along one after the next, and while you may see an on-screen prompt to block and counter, you’ll be stuck in moves that never string together, or you’ll miss the opportunity altogether and end your combos in the wiffed block stance.

The main campaign doesn’t exactly help matters, either. While some limited exploring can be done between group battles to scrounge for secondary weapons and health replenishment, objectives to move on aren’t very clearly defined. It’s not uncommon to wander around an environment aimlessly until you realize that you’re supposed to pull that small lever three floors above you. Funny enough, the opening tutorial introduces you to movement mechanics that never, ever show up in the rest of the game. Since the campaign is merely four levels long and each run about 10-20 minutes apiece, it really doesn’t matter; it’s over before you know it.

But that’s when you’re met with the extra challenges, unlockables, and an Arcade game born from the DNA of the more classic entries into this troubled franchise. This added... stuff is evidently the problem. There’s just too much crammed into this game, from the modes to the expansive skill trees (way too big for a four-level game). The extra modes are superfluous, and the Arcade game, while a neat touch, makes you wonder why they didn’t just toss out the main campaign and focus on that. It’s not a stretch to imagine that if Red Fly had left well enough alone on all of the extra stuff, they would have plenty of time to refine what would have made this game good.

There are some legitimate bright spots. For one, it’s a pretty game. The character models of each of the Turtles look very good and animate well, and even the chaff of mooks that you beat through look attractively fierce, even though they’re not exactly varied. The voice acting is strong, and the constant stream of immature jokes doesn’t get as grating as you might think. Still images that serve to expound the plot have a nice, simple elegance to them, too. That said, good production values can only carry sloppy gameplay so far.

The sun rises. The world turns. Another half-baked Ninja Turtles game disrupts our normally peaceful lives. You may now return to tearfully recalling the Zen-like beauty of Turtles in Time or the original Arcade game. At this rate, we may never have it as good again, no matter how hard they try.

This review was conducted using the Xbox 360 version of the game.