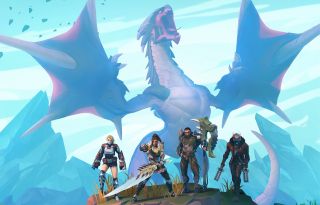 Developer Phoenix Labs teased a Dauntless Switch port earlier this year, but it never actually confirmed the release date - until now, that is. It's today. Surprise! Dauntless, a free-to-play action RPG styled after Monster Hunter, is coming to Switch today, December 10, complete with cross-play and cross-progression support for Xbox One, PS4, and PC.

The Switch version of the game will launch alongside the Stormchasers update, which contains a new monster called Malkarion and a new Hunt Pass, which is pretty much exactly what it sounds like (a battle pass equivalent). The update's also got a new mode called Escalation, which Phoenix Labs describes as "a new type of sequential hunt that features dual Behemoth encounters in addition to a number of elements of the 'roguelike' genre."

"Escalation challenges Slayers to best waves of Behemoths imbued with unique modifiers, presenting some of the most challenging battles Slayers have come to face yet," Phoenix Labs says. "Escalation offers procedurally generated Behemoth encounters, ensuring that no run feels the same. Slayers can choose from a variety of Amps that offer a range of defensive and offensive boosts following each successful encounter, and unlock more talent points earned through Escalation runs."

The new Behemoth, Malkarion, can also be accessed through Escalation - if you earn a high enough level by round five. "Malkarion is the first Behemoth in Dauntless that gives Slayers a chance to mount their prey, and its unique move set introduces a number of mechanics that will challenge even the most veteran Slayers," Phoenix Labs says.

Dauntless has grown and improved considerably since its early access days, and this new Escalation mode sounds like a good fit for its hunt-craft-hunt loop. It's also great to see more games support cross-platform multiplayer and progression, which will hopefully one day become the norm.