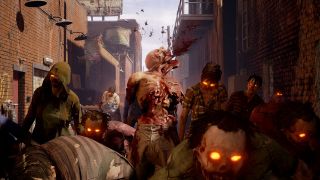 So the zombie thing has happened. You’re not dead yet, and you still have all of your limbs, so on balance, you’re doing pretty well. Not ‘great’, obviously, because who the hell is, but you’ve fortified a few shacks on the edge of town, the flesh-eaters are largely ignoring you, and you’ve collected together a decent group of people to help out. Food is running low, because hey, the downside to help is that help tends to eat. But medical supplies are pretty well topped up, you have a shedful of ammo, and most importantly, the flesh-eaters are largely ignoring you.

But then one day, when out scavenging for building materials, you happen across a young woman called Tiffany. It’s a quiet day, in that you only have to smash three zombies with open car-doors while belting along the highway between town and home, so you decide to stop for a chat. It turns out that Tiffany was a groundskeeper before the zombie thing, back when there were still things like definable grounds to keep, or any real sense of ownership at all. She might make a good gardener. She might help with the food problem. So you decide to let her into your merry band of survivors.

Just as you do this, three of her friends jump out from behind a bush and demand to come too. And Tiffany won’t leave them. So you have to take them as well. Goddamnit, she’d better be able to grow pizza.

A while later, and things are actually working out. In fact they’ve progressed from going ‘pretty well’ to something nearly approaching ‘very’. The vegetables are growing nicely, almost no-one is emaciated any more, and most importantly, there are still no attacks by wayward corpses. To be fair, the zombies aren’t really what State of Decay 2 is about. They won’t just come at you, like the omnipresent rampagers of Left 4 Dead or CoD. They’re more an ambient threat. A background stimulus to make you fortify and stockpile for the times when things inevitably do kick off. But by and large, in SoD2’s entirely systemic open-world, you make whatever trouble you end up in.

Except, of course, when it’s Tiffany’s fault.

Okay, so it’s not really her. Not directly. But at the same time, it really, totally is. You see, the garden is progressing well, vegetables are popping out of the ground all over the place, but you’re still not at the point where you feel comfortably in credit in terms of food supplies. There just isn’t quite enough going into the stockpile compared to what Tiffany’s bloody friends are eating, and while you can lift tinned goods from the now living-abandoned nearby shops, such one-off resupplies just aren’t enough to get your occasionally merry band of survivors up to the level of post-apocalyptic homeostasis required. A garden is no longer enough. You need a small farm. Time to acquire some seeds and upgrade the planting operation.

And so, resolving to risk life and limb in order to resolve a food problem caused by the person who was supposed to fix the food problem, because of her stupid, guilt-driven attachment to stupid, needy hangers-on, you head out. I’m not embellishing on Tiffany’s failings here, by the way. Every potential enclave-buddy you’ll find as you explore State of Decay 2’s sprawling, vast world will have a unique mix of physical and emotional traits, leading to all kinds of hidden bonuses (as well as ‘bonuses’)  once you move them in.

By rights you should take Tiffany with you as back-up. Teach her a good, solid lesson about the reality of the situation, and why there’s no room for dead weight. But she’s a digger, not a fighter. She’ll be burst open like a dropped bag of chips the second you take her outside into the zombie-strewn no man’s land. But still, while you might currently be playing at Matt, a gutsy action-movie choreographer with a meaty right-cross (I should point out at this stage that you have no one, canon character in State of Decay 2, but rather manipulate the whole settlement at will, like some invisible, interfering God of Unlucky Bastards), you’ll need some help. Fortunately, this time around you don’t necessarily need to risk sacrificing one of your more useful citizens, as State of Decay 2 has online co-op. And a rather neat system it uses too.

There are no lobbies here. No immersion-breaking menus, or trawls through prospective player lists, scrutinising whether BongLord69 has a better load-out than BongLord666. You simply fire up a flare, and the game will match you with a player looking to volunteer, spawning their chosen character into your world. It’s basically like Dark Souls, except that you can call in help whenever you like, and when it arrives it’s more likely to be carrying a busted frying pan than an electric bastard sword.

So you do that. You bring in a buddy (the co-op cap is four, but whoever needed four people to safely navigate a garden centre, except on Bank Holidays?) you get in the car, and you head off into town to check out a few shops. Every building in the game is fully internally rendered and explorable, so your options are pretty healthy. And for a while, it is quiet. You creep about carefully, you attract little attention, and you drop the zombies you do run into rather subtly, sustaining the calm.

But then you get a bit bored. It’s taking too long. In State of Decay 2, there’s a general rule of thumb that you can do things quick, or you can do them quietly, and this truth applies to everything from infiltration and exploration tactics to the physical act of searching a cupboard. And maybe you’re fixating, but a couple of those shamblers really remind you of Tiffany’s friends. Maybe it’s the way they’re hungrily chowing down on that corpse while providing absolutely nothing of use to zombie society as a whole. You can’t help it. You open up with your assault rifle, and every creeper in the area hears you.

It’s a frantic, chaotic fight, but eventually the area runs out of zombies to throw at you - again, this is all systemic, the hordes called from the genuine local populace rather than spawned specially for the fight. And along the way, your co-op partner has found a packet of seeds. Great success. So, with things once more going well, you decide to consolidate the win. You lock down the police station you find yourself in and turn it into an outpost, meaning that the influence of your settlement grows - meaning that the streets will be a bit quieter - and giving you the facility to share supplies between here and home-base, and also send direct management orders back. Those latter two points are most relevant to the immediate situation, because they allow you to send the treasured seeds back to your settlement via the magic teleporting cache box, and tell Tiffany to get planting. All being well, you should have fresh potatoes by the time you get back.

But all isn’t well. Because the thing about building a farm is that building a farm makes noise. And guess who is now hearing that noise, back at the main settlement, and will in a moment be attacking the hell out of it? Time to get into the car and floor it home while you still have one.

Because here’s another interesting, unexpected consequence. It might have made sense to take your best fighter out on this little scavenging mission, but that decision now means that your best fighter isn’t where the fight is. And that battle, that siege on the place that really matters, is kicking off good and hard. When you arrive back, the place is awash with rotting flesh. Heavy, Boomer-style undead have started turning up, as have Screamers, capable of attracting support from even further afield.

It’s a long, hard, bloody fight, even with Matt’s skills directly under your control and another real, live player backing you up. There is running. There is frantic shooting. There is the locking of gates, and the grenading of choke-points, and the occasional catharsis of a messy co-op takedown. But when it is quiet again, only two facts are particularly relevant. One: The farm is built, and your food supply is healthy. Two: Your settlers took a hell of a beating in that stand-off, and now none of them are very healthy at all. You’ve effectively swapped a vegetable crisis for a medicine crisis. The price of the farm was grotesque, bloody injuries. And now you have to work out how to deal with that.

Do try to make a better job of it than last time. Maybe you should think about taking Tiffany’s friends with you on this one.  I mean you’re bound to keep them safe, right…?