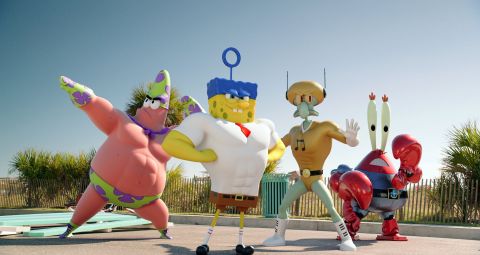 Next to message-laden, CG-soaked kids’ animations, SpongeBob stands alone. His return is a skittish but winning splash of nonsense: dip in.

Like Ed Norton’s Fight Club fridge, SpongeBob’s first movie since 2004 has little of nutritional value – which is just the point. What it delivers is what it promises: a battery of deliciously daft, fast-firing, self-mocking, flavour-rich gags, flung with such zest you don’t mind if they’re disposable.

If there’s a message there, Kung Fu Panda writers Glenn Berger and Jonathan Aibel are too canny to cave to it. Instead they wring every drop of goofy, trippy humour from the set-up until the near-anarchic mischief practically overflows.

Even if the visuals aren’t Ghibli/Pixar class, Paul Tibbitt’s resourceful direction marshals 2D surrealism and live-action larks energetically. The CG super-Sponge climax looks dry after the free-flowing 2D stretches, but peaks with a trip inside SpongeBob’s brain, some near-flying ’gulls and the letters of the word “Refunds” landing in your lap. If parents need fun for the kids this Easter, they won’t be asking for any of those.

the spongebob movie: sponge out of water

Next to message-laden, CG-soaked kids’ animations, SpongeBob stands alone. His return is a skittish but winning splash of nonsense: dip in.